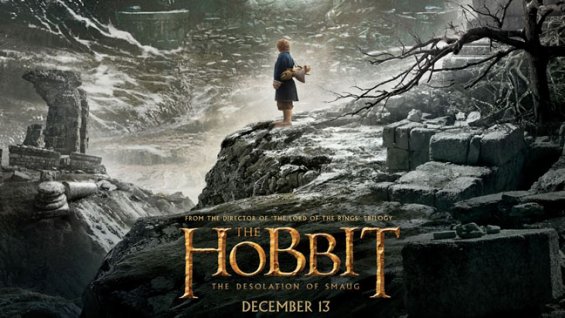 The Hobbit: The Desolation of Smaug

I am a huge fan of the original Lord of the Rings Trilogy. When I heard there would be more movies, a prequel of all things, I was so excited. I was lucky enough to get all four books on tape last Christmas and was able to listen to the story of the Hobbit and then research the story more in preparation for the movies. I will begin this review of The Desolation of Smaug (DOS) by saying that I loved the first rendition of The Hobbit: An Unexpected Journey. I view this second trilogy like the first in the fact that The Hobbit: An Unexpected Journey is much like The Fellowship of the Ring. It was very storyline based film with moments of action that gave you just enough excitement to get through. My favorite movie of the first trilogy was Lord of the Rings: The Two Towers and this was due to the story but also the action that went along with it. The moment at Helm’s Deep when the Elves show up still gets my heart pounding. In DOS, I was excited to know we would be learning more about these Elven creatures. Much like The Two Towers, DOS packs a heavy punch and the excitement is a roller coaster throughout the three hours of the film. I want to first give you a list of the characters I will be referencing throughout the review.

Bilbo returns in the second edition of this tale of urgency. Along with Gandalf and the 13 dwarves lead by Thorin, Bilbo’s journey is filled with unexpected twists and turns and plenty of adventure. Some new entries to the cast are Bard the Bowman who is a bardsmen of Laketown, Beorn who is a skin-changer, and returning to the crew is Legolas, an elf who was a part of the original trilogy. Evangeline Lilly who is known for her fame in the series Lost is also a new addition to the crew as the She-Elf Tauriel. This is a very strong cast of characters but perhaps the most influential is that of Benedict Cumberbatch who is never seen but often heard. Cumberbatch voices Smaug the Dragon and the Necromancer. Cumberbatch fits the bill for both of these villains, and who has proven to be great in that villainous role throughout the year. This ensemble cast works well together to tell this tale of 15 individuals who have a long way to go and a short time to get there.

The main premise of the Hobbit Trilogy is to tell the tale of Thorin Oakenshield and his quest to regain his throne under the lonely mountain. Thorin and a group of dwarves seek out the counsel of Gandalf the Gray, a wizard and his “burglar” friend Bilbo Baggins who is a hobbit.  I won’t go too in depth with each of the individual races of the Lord of the Rings, but each has their own individual characteristics that make you feel for their character. One of the distinct characteristics of dwarves is that of greed. Armitage does an amazing job at making me care about him and then despise him as Thorin. His quest is to reclaim his throne at all costs, even that of his friends and kin. There were moments that I could cringe due to his actions and they would be played off by Bilbo’s generosity. The hobbits have always proven to have that nurturing side and Bilbo is a fine contrast to Thorin and gives the story some second level depth as the journey continues. In the first film, the other 12 dwarves didn’t get too much character development, but in the second film, Kili gets a chance to develop. His communication with Tauriel is quite good, and gives the characters a chance to develop some individualization throughout this mishmash of talent.

I want to take a moment and recall a rumor I read a while ago about Peter Jackson wanting to make Liv Tyler’s Arwen a bad ass in the original Lord of the Ring Trilogy. She was going to be a mighty warrior rather than the princess of the Elves. Those rumors most certainly came true through Tauriel  in the DOS. At one point she appears to be a one-woman army and is quite the warrior, which reminded me of the Arwen story. I am not saying it is a bad thing, but it interesting to note how powerful a female character can appear, when in fact she is the only one of substance throughout the entire film. Cate Blanchett’s Galadriel is non-existent through the second film, much to my dismay and the other female characters are simply too minor to have any long-term substance. Tauriel’s character is something to be admired and a part of the third film that I am really looking forward to seeing.

As the title of the movie states, the Desolation of Smaug is about the last dragon in Middle Earth, Smaug. He took the lonely mountain many years prior and now sleeps under mountains of gold in what was the dwarf kingdom. Benedict Cumberbatch is heard as the voice of Smaug and he does a very good job at bringing this dragon to life. There is a lot of CGI in this film, and at some points it is hard to follow due to the camera angles, but Smaug is something to be heard and seen. He has a great back and forth with Bilbo and we get only a glimpse of the power he possesses. He will undoubtedly be a major role in the third film, another thing I am looking forward to.

This movie is filled with a measure of urgency, and like the title suggests, they have a long way to go and a short time to get there. Twelve months had passed since the beginning of the first film to the beginning of the second and at no point does the film give up on the sense that the dwarves and Bilbo need to get where they are going quickly. Peter Jackson has done a fine job recreating this second trilogy. I am in no way an expert of the Tolkien novels, but I would consider myself a very avid fan. It has been fun to do some research on the novel and see what the film hit and where it missed.

The one thing I have always enjoyed about Jackson’s Tolkien films is the way he tells one big story with two to four different intertwining tales. The film does drag at points but it never loses focus. If you are a fan of the books, you may notice some differences, but I didn’t find anything offensive.  This film will leave you wondering what have they done and makes you even more excited to see what will happen next in the Hobbit: There and Back Again next December. After watching this movie again, I moved it up to 4th on the 20 movies that I saw that were released last year.

I am really looking forward to the year in film that 2014 will be, especially the final piece of this epic trilogy due out December 2014. Be sure to check out my DVD review of The Hobbit: An Unexpected Journey right here at the Place to Be Nation.