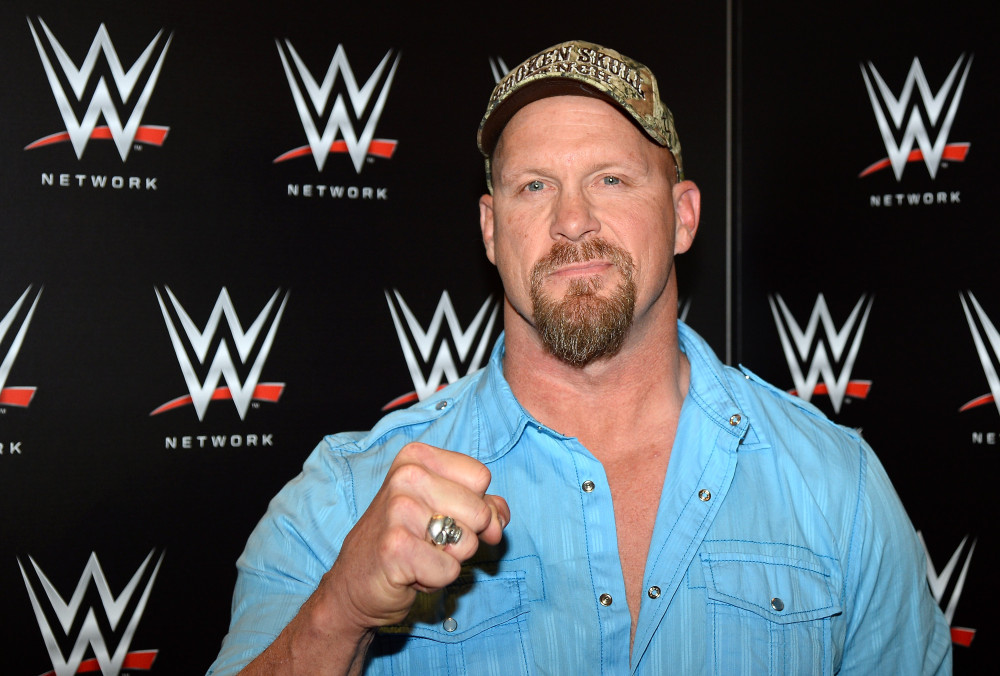 Glenn: A segment of Steve Austin’s podcast has been making the rounds of mainstream and wrestling news outlets this week, thanks to an endorsement of marriage equality delivered in Stone Cold’s signature style. For a statement from a straight person on a non-straight issue, it hits a lot of the right notes: no matter who wants to get married, it’s not your place to tell them they can’t; religious folks who think their gods forbid it should pipe down and let the rest of us move on; there really are higher priorities than harshing on people who want some basic legal rights recognized. Thankfully, he gave his opinions without any of the “no homo” nonsense that straight people often jam into such discussions. (This is all a rather egregious paraphrase — listen to the clip to hear exactly what chaps Stone Cold’s ass about all of this; for the full context, go to the podcast archive and find episode 29. (Yes, the episode was first posted last July. News cycles move in mysterious ways.)) For a wrestling business whose sorry history with these and related issues was previously addressed by the esteemed Mr. Wille, it’s refreshing to see Austin in the same boat as, for instance, CM Punk. It brings to mind an incident in 2012 when John Cena took to Twitter to discuss the Rock (whose “lady parts” promo was, relatedly, a recent low point in LGBT engagement) and a fan tried to stir the pot by suggesting that Rock was gay, to which Cena responded that, as Dwayne would say, it doesn’t matter.

Steve: Austin’s commentary serves as a nice reminder to take an internal review of all stereotypes. It’s unexpected that a man whose on-screen character emulates a violent Texas redneck (and whose personality seems to be a milder version of that character) would be so outspoken on the sadly still-divisive issue of gay marriage. Reviewing my thoughts from the aforementioned article on Darren Young, it’s been refreshing that the WWE product has continued to avoid the clearly unnecessary depiction of homosexuality that it did in the past. Darren Young’s coming out has not positively or negatively affected his push, and, from an outsider’s perspective, he is being judged based on his ability to work and draw a reaction from the crowd. Of course, we have no direct inside knowledge on behind-the-scenes politics, but at least the faces of the business, HHH and Stephanie McMahon, have come out publicly for equal rights.

I’ve had two newer thoughts concerning the relationship of homosexuality to professional wrestling. A higher percentage of wrestlers compared to the general United States population identify as Libertarian, likely due to their status as independent contractors and the tax liabilities connected to that status. As one of my best friends would be quick to point out, true Libertarians should be for gay marriage, as they pine for government to be separated from the private affairs of its citizens. Furthermore, as I’ve become more active with the Place to Be Network, I’ve listened to countless interviews with wrestlers past and present, many of whom noted how their positive interactions with their gay peers have challenged and changed their pre-conceived notions over the years. Wrestlers from WWE and independent promotions alike have been actively campaigning for the No H8 organization (a shout out to Kevin Kelly Show alum Michael Bennett, who has been very vocal about his beliefs in equal rights for all). As many straight LGBT allies would tell you, positive relationships with members of the gay community do wonders for strengthening the worldview of the inherent dignity of all human beings (for a great example of this, check out the fabulous book My Two Moms: Lessons of Love, Strength, and What Makes a Family by Zach Walls). I personally applaud Steve Austin, not so much for his beliefs, but for having the courage to speak them in such a public manner.

It’s important to note that plenty of seats in the fourth row are still available, and it will be interesting to compare the attendance to the raucous Ring of Honor shows held in the same area this year.