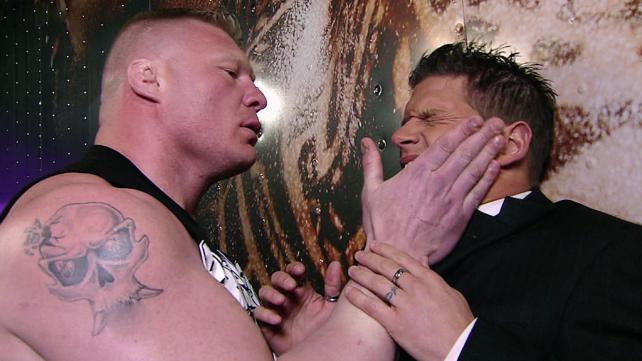 In this supposed PG-era of sanitized professional wrestling, the general consensus that some of the more salacious storylines of the Attitude Era were a thing of the past. But, over the last month, a disturbing trend has started to reemerge. After the character of Fandango unceremoniously dumped Summer Rae over Twitter, picking up a new romantic partner in Layla, the two girls started feuding. It’s bad enough that the two Divas are fighting over arguably the most sleazy character on the roster, but they took it a step farther, as Summer Rae attacked Layla backstage, dumping milk and cosmetic products over Layla, clearly in an attempt to humiliate her. WWE has a history of this type of action before (gravy matches, slapstick pies/cakes in the face, etc.), but it seems to have faded over the years. The one thing that these sketches generally have in common: the victims are usually women. Now, maybe the theory is that the female character can’t get their comeuppance in the violent manner associated with wrestling, but I truly believe something more disgusting is in play. My fears were confirmed the following week, as Layla retaliated, not solely with milk, but with kitty litter. Yes, kitty litter. As an avid reader of the Wednesday Walk Around the Web, my tag-team partner Glenn Butler taught me the truly disturbing nature of that substance.

Now, I’m all for suspending disbelief, I mean, we’re talking professional wrestling here, but do you realize how much creative license was used for this segment?

Imagine Layla’s thought process: “You know, Summer dumped that milk on me. Cats like milk. We’re kind of embroiled in a cat fight. What do cats do? Lick themselves? Take ridiculously long naps? Relieve themselves in litter? BINGO. I’m going to attack her with cat litter. Okay, I can’t carry that onto the plane without paying extra baggage fees, so I’ll need to take the rental car out to Target and pick up a small 30-lb. container. Do you think anyone will notice that I’m lugging around this giant container of litter around the locker room? Summer’s going to be so embarrassed when I dump this ridiculously oversized box of litter on her. Sure, it’s made of fine clay particles that covers everything around it, and I’ll likely be just as destroyed as she is, BUT IT WILL BE SO WORTH IT. Wait, what’s my motivation for this again?”

Outside of the WWE and Jerry Springer, I’ve never seen women get into an argument over a man which ended in food fights or other, umm, unsavory entities dumped on one another. Perhaps the metaphor they’re going for is a “catfight,” but to me, it’s some male on the writing staff taking out his issues on women by humiliating them on live television, treating them as a literal dumping ground. And I’m still confused why Summer Rae is going after Layla when Fandango is the one that broke up with her. She’s even jumping in the ring kissing him to make Layla jealous.

The last couple paragraphs were essentially going to be a bullet point, but the misogyny continued over the last two weeks, as outgoing performer Vickie Guerrero, long the butt of these types of “jokes” was doused with fake vomit, leading to the return of the time-honored tradition of pudding wrestling on Raw this past Monday. Sorry, it looked like pudding, but the announcers led us to believe that it was sewage or excrement. This segment, in which fans were expected to cheer for the hour-long face turn of Vickie Guerrero before her final appearance led to five women being unceremoniously dumped into the mess. I guess that the silver lining was that the boss, Stephanie McMahon, partook in the segment.

Initially, I wondered who backstage was getting excited by these segments. And it’s definitely that kind of excitement, because otherwise we wouldn’t be having this on virtually every episode for the last month. Then I saw the reaction of the crowd to the unveiling of the pudding bath and realized the pathetic truth. It’s virtually the entire male adult audience of the program. And though, through PTBN, I’ve felt more positive about being a fan of wrestling, the shame I felt watching this dreck makes me question what I’m doing with my spare time, and understand why others look down on me for doing so.