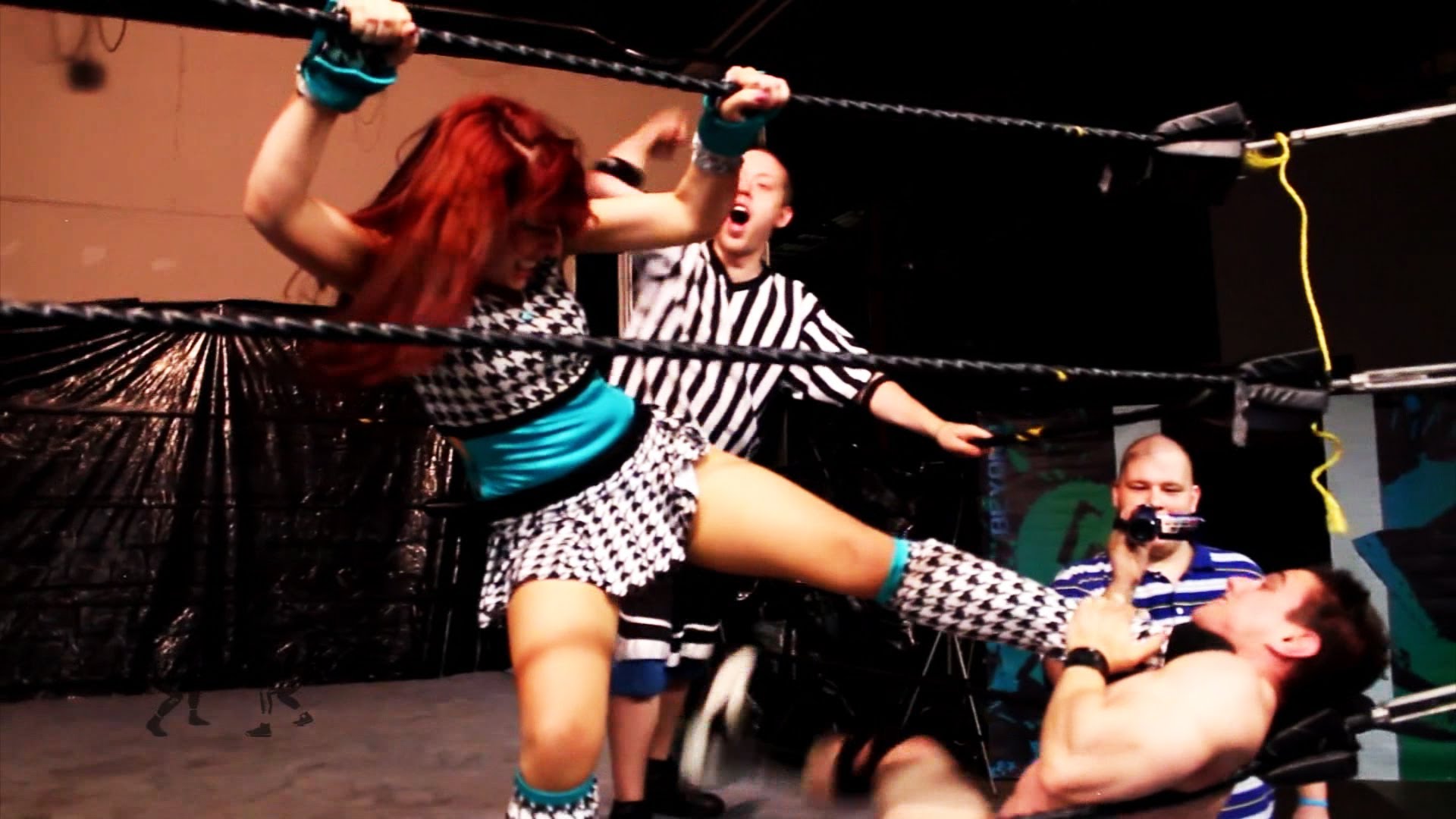 This year, there’s been an increased amount of chatter in the wrestling community regarding intergender wrestling. In a podcast interview with Shimmer champion Nicole Matthews, Colt Cabana voiced the discomfort that he and some of his peers have regarding the topic. His comments intrigued Steve, who did further research and found a recently-debuted documentary aptly named “A Short Documentary about InterGender Wrestling.” The documentary got the High Spot team talking about the concept and elicited some varying responses. This week, we once again toss out our format to focus on one topic: intergender wrestling.

Steve: After listening to the podcast and viewing the movie, I had a lot of mixed emotions and feelings surface. Reflecting back on my own experiences viewing intergender wrestling, I remembered a few clear standouts over the last thirty so years. In high school and college, I recall watching the Andy Kaufman documentary “I’m From Hollywood” several times when it aired on Comedy Central. This hour-long film traced Kaufman’s foray into professional wrestling, as he worked in the Memphis territory with Jerry Lawler, holding the fictitious Inter-Gender championship. The rabid Memphis fan base deplored Kaufman; looking back, it’s easy to see this as farcical in nature, as the petite Kaufman would be outmatched by his opponent and generally cheat to win.

The next two experiences, though from completely different eras and companies, had a common thread. For a period during the Attitude Era of the WWE, Chyna rose from serving as the bodyguard of Triple H to an in-ring competitor. Trained by the legendary Killer Kowalski, Chyna was presented by the WWE as an athlete either physically equal or superior to her male opponents. Years later, during the 2012 “Synergy” event, cross-promoted by Ring of Honor and Chikara Wrestling, my friends and I witnessed a fantastic scientific match between current WWE trainer Sara del Rey and El Generico, a bout that our group considered to be the best of the day. Again, the two combatants were close in size and presented as athletic equals. In some of the matches presented in the documentary, it’s hard to suspend disbelief that a 110 lb. athlete, regardless of gender, would be able to have a competitive match with a 275 lb. monster. It’s what made all of those Spike Dudley “giant-killer” matches of the days in ECW so unbelievable to some.

Now, as companies like Beyond Wrestling and AIW present more intergender contests, the latter promotion going as far as to have an entire event focused on the subgenre, I have more mixed feelings. Surely, in the scripted world of wrestling, where the story often resembles a morality play, showing that women can be on the same level as men in the ring feels empowering, maybe even feminist, in presentation. Veda Scott, heavily featured in the documentary and a fixture on Ring of Honor television, seems to be somebody who would promote this philosophy. Scott is talented both in and out of the ring, a well-spoken graduate of Drexel University’s law program. But her feud with former partner Gregory Iron is bloody, violent, and conjures up imagery of domestic violence (warning: this video is pretty uncomfortable to watch). Alas, she ultimately wins the feud, backing up the feminist hypothesis, but in the end it all feels gratuitous. And maybe that’s just the point. Though some of the men interviewed state that they’re all for promoting equality amongst equally talented wrestling professionals, as someone who deals with non-verbal cues and active listening as a living, I’m not completely buying their sincerity. After all, wrestling historically has its roots as a carnival sideshow, and truth has never reigned supreme in that environment. It’s far more likely that the promoters see a niche audience willing to pay for this type of entertainment, and I wouldn’t doubt that it touches upon some of the talent and/or management’s, shall we say, interests, as well. The metaphor of a dog-collar match between a large man and a smaller woman is not exactly subtle.

Glenn: There can definitely be cause for discomfort. When this topic came up, my first thought was that it’s awfully hard to shift the semiotics of gendered violence, especially with the backdrop of a depressingly misogynistic society. But it’s not necessarily the responsibility of theater to steer clear of certain issues, and the depiction of a thing does not necessarily endorse it. As I watched the documentary above, I was impressed by the equal footing many of the featured matches seemed to achieve (which doesn’t say good things about my assumptions), and indeed this seems to get much closer to presenting women who wrestle as smart and powerful than any slogan.

I tend to get a little anxious whenever wrestling veers into Serious Social Issues. While any storyline succeeds or fails based on its presentation, if a typical angle is disappointing it will merely be bad television, or may negatively impact the perception of a show or performer; if an angle incorporates issues that are intensely personal to some, a misstep could easily become damaging by reinforcing entrenched power structures. The depiction of a thing does not necessarily endorse it, but that depends greatly on the payoff of the particular story. Chris Jericho mercilessly tore down CM Punk with accusations that his family was made up entirely of worthless addicts, but Punk got the last word by besting Jericho in consecutive PPV matches, the second of which afforded him the opportunity to, well, beat the piss out of him. Our Hero is vindicated through retributive violence, as the all-too-common tendency toward revenge is channeled into televised catharsis. Other angles are not afforded so satisfying a conclusion: LayCool’s “Piggie James” taunts were given voluminous airtime, but while Mickie James won a match to get her revenge, it was perfunctory and ultimately unsatisfying. Other times we fans bear more shame: John Cena and The Rock tossed homophobic and misogynistic garbage at each other throughout 2011 & 2012 and were cheered for it, often among a contingent of fans typically disinclined to cheer Cena; as Steve mentioned, for a time Chyna was as prominent a female wrestler as there was, to which many fans reacted by questioning her sex. It’s fine — great, even — to wade into these waters when terrible things are unambiguously presented as unambiguously dreadful. (In this light, I’m more comfortable with the Veda Scott/Gregory Iron video than Steve is. Then again, it’s not an angle that touches on painful triggers for me, so your mileage may vary.) There’s a place for ambiguity in storytelling, and there’s a place for clarity. As much as crowds might have wanted to see John Cena give Vickie Guerrero an FU on some occasions (a testament to her heat-drawing ability, itself based on stereotypes of “shrill” women), an unequivocal babyface has to be a person who never would.

There are good and bad ways to build rivalries, and there are good and bad ways to react to them. No aspect of the art of wrestling need necessarily be gendered, but culture makes it so. Given the baseline assumptions many people make about a woman who can beat up a man, and a man who can be beaten up by a woman, there’s a lot of re-education that needs to happen. It seems that some of the promotions featuring intergender matches and some of the wrestlers engaging in them most frequently are working toward that, intentionally or not, and cheers to them for that. Yes, this means that in a rivalry between a man and a woman, the man would almost always have to play the heel; let’s have society catch up a little more before branching out from there. (The man appearing in the Ray Rice jersey makes it quite viscerally clear where a viewer’s loyalties need to be. We need to be both wrestling fans and decent human beings, as unlikely as it may sometimes seem, and if those are in conflict the proper priority shouldn’t seriously be a question.) As Steve mentioned, there are more cynical reasons to present these stories and these matches, but I got the impression from the documentary that there’s also some good being done. It certainly needs doing.

Are we wringing our hands a little too much? Thinking that our own perspectives (as, well, dudes) might be limited, we asked PTBN’s own Kristle Maxwell what she thought of the documentary, and she deserves the last word:

Kristle: I definitely agree that it’s great for girl power and women being equal. To those who are up to the challenge, I salute you. They look like great role models for little girls who are into wrestling. On the other hand, it can be a little disturbing to see a 300-pound guy crushing a 100-pound girl…I mean, can’t they use weight classes? And honestly, they talk about people having issues with men beating on women, but there are plenty of people who just have issues with people beating on people; this is a violent activity from all angles, so if you can stomach wrestling you should be able to stomach all of wrestling, where apparently men, women and bears are fair game.