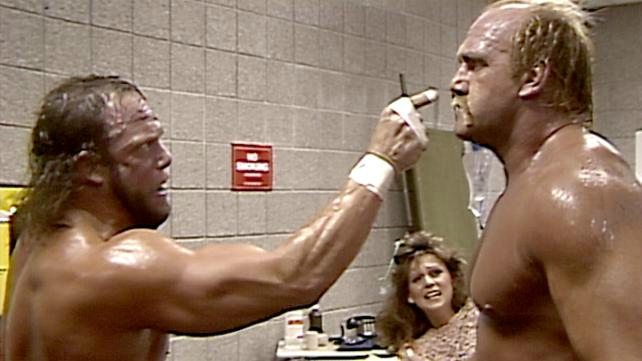 Another week is almost in the books which means it’s time for another edition of “Cowboy Goes to Class”.  This week we finish our six match examination of the Mega Powers. First up, I had to go to YouTube to find this Main Event tussle between the beloved Mega Powers, escorted by Miss Elizabeth, and the Twin Towers with their manager, Slick. While the Mega Powers have been wildly successful up to this point, there is a feeling that they are a ticking timebomb as a unit. It seems that with every match, Savage becomes more discontented. Hogan is either completely oblivious to this or has been intentionally “poking the bear” with his over the top, glory hogging, me-first attitude. I have a feeling this will all come to a head soon.

The match starts off with the standard Mega Powers argument of who will be in the ring first. After much deliberation, Hogan ends up in the ring against the Boss Man. As has been typical of the partnership so far, the champion Savage takes a back seat to the Hulkster. After the initial disagreement, the Mega Powers actually work well together as a team. One thing that I believe gets overlooked is that these guys actually had some pretty good in ring chemistry. The first ten minutes or so are a good, solid wrestling match. The Twin Towers and Slick really brought their A-game for this one and there is some really nice back and forth action. Then it happens…

Savage is tossed out of the ring directly into Miss Elizabeth knocking both of them out cold. Hogan comes over to help and is spending some serious extra time with Elizabeth. Savage comes to his senses and sees the Hulkster straddled over the unconscious Elizabeth and goes ballistic. Hogan, again completely oblivious, is so distraught by the injury to Elizabeth that he doesn’t seem to notice Savage’s anger. An openly weeping Hulk carries Elizabeth back to the medical area leaving his partner in the ring to the deal with the Twin Towers on his own. Needless to say this does not go over well with the Macho Man. Elizabeth finally wakes up backstage and Hulk is now free to return to the ring. When he does, Savage takes his belt and goes home, leaving Hogan to fend for himself (just as Hulk had done to him).

The match continues and Hogan somehow wins after surviving a big splash from Akeem. This is a testament to just how invincible and popular Hulk was at the time. In my mind, the storyline actually called for Hogan to lose this match. There is no rational reason for him to win after being abandoned by his partner and he would have, in theory, been even more upset with the situation had the Mega Powers taken the pin. Instead, Hogan wins the match while the crowd goes completely wild and then he heads back stage to confront the Macho Man.

Here is where things get a little tough for me. They clearly try to paint this picture with Hogan as the clear good guy and Savage as the heel. Savage sucker shots Hogan with the championship belt and needs to be restrained by multiple individuals to not inflict any more damage on the fallen Hulkster. In my estimation, Savage was completely justified in the way he acted. Throughout the partnership, Hogan has consistently tried to upstage the Macho Man. Worse yet, Hogan did these things in a very passive aggressive way consistently trying to make himself look like a great guy. Even in helping Elizabeth, Hogan could have stayed in the ring and dealt with the Towers while Savage tended to his significant other. Also, the first words out of Hogan’s mouth when Elizabeth woke up were “Randy didn’t mean it.” Nothing like throwing him under the bus Hulk! The crowd and Gorilla are so pro Hogan that anything he does will be looked upon favorably. The poor Macho Man is just caught in the crossfire. Even at the time, I remember thinking that Savage was the Devil incarnate. Regardless, the Mega Powers have officially split up and the stage is set for the big title bout at WrestleMania V. 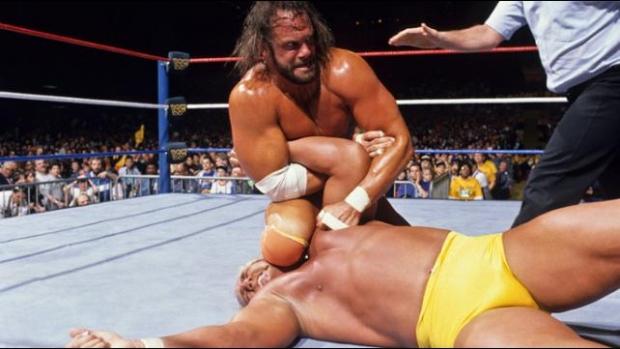 It has all come down to this. The seemingly invincible combination of Hulk and Macho Man splintered to the point that the two now faced each other for the belt. There was an electricity in the air for this main event that is special, even for WrestleMania. The crowd is anxious for Hulkamania to run wild again and for their hero to win back his title. At this point, the title is just about all Macho Man has left. Elizabeth has left him after some pretty nasty abuse sequences (which would never fly today) and the crowd hates him. To make matters worse, Elizabeth will be at ringside for the match. The fall from grace for Savage has been staggering.

Let’s make one thing clear: This is a fantastic match. Savage is a great in ring worker and he and Hogan put on a show. Hulk plays the part of the big bully to perfection while the Macho Man is a high flyer and shows off his superior athleticism. The commentary is great too. Jesse the Body, the only guy in the arena rooting for Savage, is providing excellent analysis and Gorilla is at his Hogan nut hugging best. Hogan is busted up early with an ugly cut above his eye and Macho Man is working the eye over.

Eventually the action spills outside the ring and this is where things get interesting. Elizabeth, at different points, helps both Savage and Hogan. Savage uses her as a shield and also attempts to throw Hogan into her. That’s what makes what happens next so strange. After making it seem as though he was going to beat Elizabeth in front of a live national audience, Savage makes her go back to the dressing room and away from the ring. The only logical reason for this is that he was concerned for her safety at ringside. If he was concerned for her safety, then why did he consistently put her in harm’s way during the bout? The Macho Man’s internal struggle with his love for Elizabeth and his anger with her for openly supporting Hogan adds an extra layer to this feud.

Eventually they make their way back into the ring and Macho Man hits the Flying Elbow. No one has ever gotten up from this move but, of course, Hogan kicks out emphatically before the ref can count to two. Hogan then gets his patented adrenaline rush, eats a bunch of clean shots that have no effect, nails Savage with the big boot, and finishes him off with the Leg Drop. The ref counts to three and Hogan has reclaimed the gold. The crowd is in an absolute frenzy as their man is on top again. While I do believe that Hogan was the rightful champion for this time period, I feel that the Macho Man got a raw deal in this whole scenario. I believe he deserved a more “Face vs. Face” feud with Hogan (similar to Hogan and Warrior). Instead, he was painted as the woman beating bad guy to Hogan’s choir boy. Not cool. The only positive for Savage was that, by showing concern for Elizabeth’s safety, he may get his woman back in the future. Overall, I thoroughly enjoyed reliving the year of the Mega Powers and can’t wait for my next assignment.

Teacher’s Note: Very good analysis of this epic feud, Cowboy. Up next, we pay tribute to the Ultimate Warrior by reliving one of his greatest feuds!