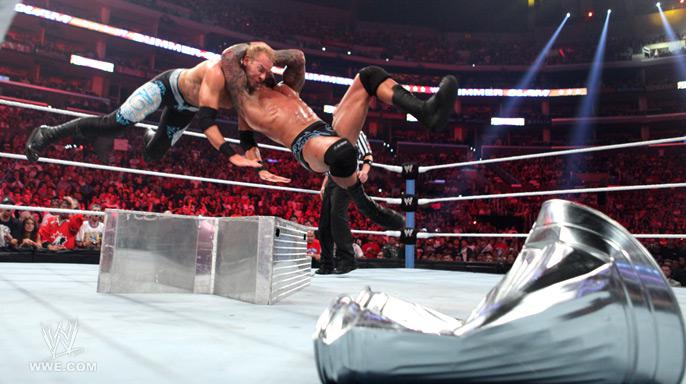 Howdy wrestling fans! Cowboy here with this week’s edition of Cowboy Goes to Class. After Sunday’s awesome SummerSlam card, I was certainly excited to see what the Professor had in store for me this week. He assigned SummerSlam 2011 and, being in a SummerSlam state of euphoria, I couldn’t have been happier. This card looked great on paper as it was headlined by a title bout between John Cena and CM Punk. Would it live up to my high expectations? Let’s see! Here’s the breakdown.

Match of the Night: Randy Orton vs. Christian for the World Heavyweight Championship

Upset Alert! Upset Alert! When looking at the card before watching the show, I never would have guessed that this would earn Match of the Night. While I do like Orton’s work, Christian tends to really annoy me. I felt this would be a C+ match at best. Boy was I wrong! Things kicked off in awesome fashion as Christian invites his best friend and former partner, “The Rated R Superstar” Edge, to the ring for some support prior to the match. Edge gets a huge pop from the crowd and proceeds to call his best a friend “a whiny little bitch”, much to everyone’s delight. Next, Randy makes his way to the ring and the No Holds Barred match begins. What an awesome match this was. There were five or six times where I thought it was over. Both guys were very creative. In particular, Christian’s creativity stood out as he went for Edge’s spear and Orton’s own RKO at different points in the match. These guys put each other through tables, nailed each other with kendo sticks, and Orton even drilled Christian with a DDT onto a garbage can. Orton finally finished things off with a vicious RKO. Randy was crowned World Heavyweight Champion and you left this match feeling as though he truly earned the belt. Christian upped his stock significantly in my book with this performance as well. It was also great to see the crowd getting behind Randy. I always feel as though he is underappreciated. For example, in this past Sunday’s bout with Roman Reigns, Orton was supposed to basically be cannon fodder for the up-and-comer Reigns. What happened? Orton completely carried the match and I walked away from that one feeling that the better wrestler lost. In other words, it was fantastic to see the Viper get a hard earned victory in a great match. Bravo gentlemen!

Performance of the Night: Randy Orton

I don’t generally like to give my Performance of the Night from someone in the Match of the Night, but I have to make an exception for this event. There weren’t very many matches and Orton’s performance really stood out above the rest. The Main Event was a major disappointment for me and none of the other matches on the card had an important “feel” to them. I was tempted to give this award to Wade Barrett just to piss off the Daniel Bryan lovers but I decided to go with Orton. His title winning effort was legit, hard fought, and one of the best performances of his career (that I have seen).

Here’s where my disdain for Bryan rears its ugly head! Looking over the card, I thought this would be an easy win for everybody’s favorite wrestler. I was pleasantly surprised when Barrett got the clean win over Bryan. I will give Bryan credit where it is due. He and Barrett’s match was a solid back and forth affair with good, sustained action. I’ve never questioned Bryan’s technical wrestling skills and they were on display here. Alas, Barrett’s size and power were too much for the Little Engine that Could to overcome and he walked away with the well deserved victory. A standing ovation occurred as the count of three was delivered in the Cowboy’s Castle.

What an epic disaster this was. The buildup for this match was awesome and I was really psyched for the contest. Then the match started…I can’t say enough negative things about this match. First and foremost, I thought it was boring. For what seemed like the first ten minutes, these guys just traded headlocks and armbars. Eventually things heated up…I guess. We had a barrage of finishers with both guys locking up their signature submissions and landing their finishing moves (which were very similar versions of the fireman’s carry at this point). Alas, each man was very predictably able to either get to the ropes for the submissions or kick out of lackluster pin attempts. HHH was the guest referee in this one. Somehow he actually stayed “right down the middle”, not playing favorites for either guy. His main contribution was tossing both guys back in the ring to avoid a double count out…thanks Hunter. Until the ending, the match was merely an average, somewhat boring affair between two high profile wrestlers. Certainly not the first or last time we would get this in a Main Event. The ending put this match over the top as quite possibly the worst Main Event of a major pay-per-view that I’ve ever seen. Punk landed his finisher for a second time on Cena and went for the cover. Cena got his foot on the rope at the count of one, yet HHH didn’t see it and finished the three count, awarding the match to Punk. This is not HHH being devious in any way, mind you. He just simply “missed” the call. In case this finish didn’t piss you off already, there’s more. Inexplicably, “Big Sexy” Kevin Nash came out of the crowd to powerbomb the celebrating Punk. Next, nobody’s favorite wrestler Alberto Del Rio, “Mr. Money in the Bank”, ran to the ring, kicked punk in the face, and pinned him for the title. What?!?!? To end SummerSlam with such a joke of a finish was a travesty. I hated everything about it. Needless to say I would have tuned in to Raw the next night just to see how this junk played out…I guess that’s the goal of Vince and the boys. Oh well. 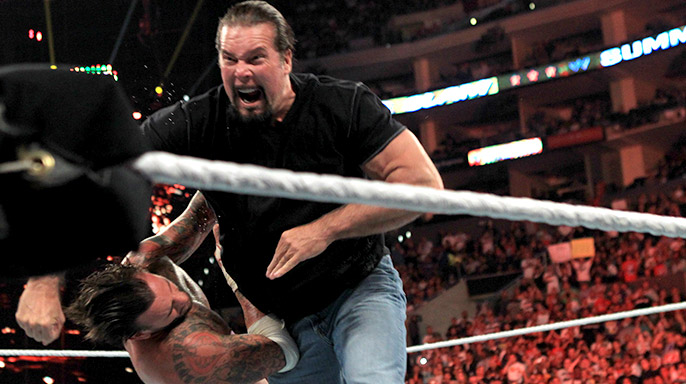