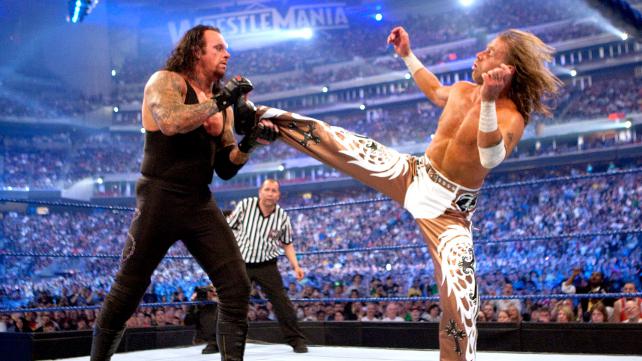 Shawn Michaels vs. The Undertaker – WrestleMania 25

We pick up the legendary feud between legends HBK and Undertaker a little more than 10 years after their last pay per view headliner at Royal Rumble 1998. At this point, the Undertaker has run his consecutive WrestleMania victories streak to 16. Shawn is viewed to be the biggest threat to date to the streak. Billed as “Mr. WrestleMania”, Shawn has a history of stepping up when the stakes are highest and owns victories over Taker while Taker has never defeated him in a singles match. There seems to be a feeling in the air that The Streak is actually in jeopardy for the first time in a long time. Michaels has the star power, pedigree, and career achievements to be one of the few active wrestlers considered “worthy” of blemishing the Deadman’s perfect WrestleMania record.

The match is being billed as clash of “Light vs. Darkness” and Shawn appears first in a long white trench coat and top hat. He loses these and makes his way to the ring to his signature “Sexy Boy” intro. While not quite in his prime as in the earlier bouts with Taker, HBK still brings the attitude like no one else. He gets a huge ovation from the crowd as he waits for Taker to make his eagerly anticipated entrance. The signature bells toll and Undertaker slowly strolls to the squared circle. Hearing this music and seeing this man at WrestleMania gives me some serious goosebumps. This is his ring and his show and the fact that we think Shawn actually has a chance to win is a testament to HBK’s greatness.

What follows is, quite simply, the best wrestling match I’ve ever seen. From the opening bell, both guys brought it with a rarely seen intensity and every time I felt the match couldn’t get any better, the bar was raised. This was the Thrilla in Manilla (Ali vs. Frazier III) of wrestling matches. Both guys are ever so slightly past their prime, but their styles mesh in such a way that it doesn’t matter.

There are a number of ebbs and flows through the beginning and middle portions of the bout with neither man taking a clear advantage. Unlike their encounters a decade earlier, there is no outside interference, foreign objects, or a different storyline to push. This is just two of the best to ever step in the ring delivering a performance for the ages. The match is on the table and the crowd is going completely bonkers as we head to the final minutes that turn this match from great to legendary.

In the match’s finishing sequence HBK is able to kick out from a chokeslam, Last Ride, and Tombstone. Not to be outdone, Taker barely beats the count after eating Sweet Chin Music…twice. For each one of these finishers, I felt the match was over. In a rare occurrence, the crowd was actively rooting for both guys. With each kick out, the audience gasped and cheered louder. As viewers, we did not want this masterpiece to end. Finally, Taker was able to catch HBK as he moonsaulted off the top rope and land a second Tombstone. The referee counted three and The Streak was bumped up to 17 in a row.

Unbelievably, this wasn’t the main event. I felt genuinely sorry for the wrestlers competing after this match as there was nowhere to go but down. Undertaker and HBK delivered an absolute classic that had me on the edge of my seat even though I knew the outcome going in. When HBK nailed Taker with the second Sweet Chin Music, for a split second I thought there had been some kind of mistake and The Streak actually ended at 16 and not 21. Overall, just a great bout. These two guys have set the bar impossibly high for their clash at WrestleMania 26. I can’t wait to see if they deliver again! 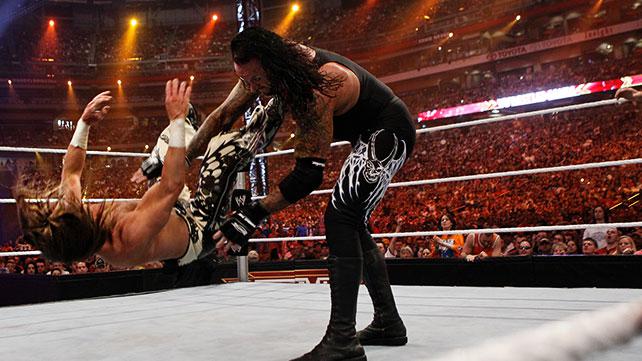 Shawn Michaels vs. The Undertaker – WrestleMania 26

We fast forward to one year later at WrestleMania 26. It is clear that the WWE brass understood how difficult it would be to avoid a let down after the brilliance of last year’s WrestleMania clash. To up the ante and give the match a fresh flavor, the great HBK has put his career on the line. They also smartly made the decision to make this bout the main event. Shawn will either leave the ring as the conqueror of The Streak or as an ex-WWE superstar. The stakes couldn’t be higher.

As Shawn’s music is pumped into the arena I, surprisingly, felt a lump in the back of my throat. This was very likely going to be his last entrance to the ring as a combatant and you could see that he was taking it all in. Shawn is one of the greats and always delivered the goods with his combination of high flying in-ring maneuvers and a cocky, fearless attitude outside it. If this is indeed his last match, he will be greatly missed by all of us. Next, Taker makes his way to the ring and the rematch to probably the best match in WrestleMania history is about to begin.

Again, HBK and Taker fight to an almost dead heat through the beginning stages of the bout. There is a wild card as Taker appears to injure his knee in the opening few minutes. Shawn attacks the knee at every opportunity and it is looking more and more like The Streak will end and Michaels’ career will keep going. The action spills outside the ring and Undertaker is left prone on the announce table. What follows is the moonsault heard round the world as HBK vaults himself off the top rope and lands the high risk maneuver. As in the first match, both warriors are leaving everything they have in the middle of the arena.

As in the first bout, both guys are able to kick out of multiple finishers from their opponent. Again, Taker kicks out of a perfectly landed Sweet Chin Music kick that I was convinced would end the bout. While the action is slightly more sloppy than their first bout (particularly a flying DDT “landed” by Michaels where Taker’s head was a good foot off the apron), the match is delivering in a big way. The crowd can’t get enough of both guys and the drama builds with every near fall.

The finishing sequence is one for the ages. Taker nails Shawn with a Tombstone, which HBK is somehow able to kick out of. Taker lowers his shoulder straps and is just about to give his throat slash gesture when something strange happens. He glares down at Michaels with a look of mercy and respect that we have never seen from the Deadman. He implores HBK to “Stay Down!” as the Shawn literally pulls himself up using Taker’s body as a crutch. Ever defiant, Shawn gives the throat slash gesture to Taker from his knees and drills the Deadman with one last shot. Taker becomes infuriated and nails another Tombstone, winning the bout. While the match as a whole was not as good as their classic encounter from WrestleMania 25, I loved the finish. What a perfect way for HBK to go out. First, he wins the respect from the emotionless destroyer that is the Undertaker. Then, he refuses to give in and accept the inevitable choosing instead to go out on his shield like any true warrior. Not every wrestler gets to go out on his own terms and the WWE’s history of sticking it to even its top performers is well documented. With Shawn, though, they got it right as a great career was capped off perfectly. Thanks for the memories, Shawn! You paved the way for somewhat undersized wrestlers like CM Punk and Daniel Bryan by showing that you didn’t have to be a behemoth to be the biggest guy in the room. These back to back Mania bouts between Taker and HBK were wrestling at its best and I feel honored to have had the pleasure of covering them for you.

Teacher’s Note: Fantastic analysis, Cowboy! These were two classic matches and your takes were spot on. Next week, we head south to WCW for the genesis of the NWO angle!