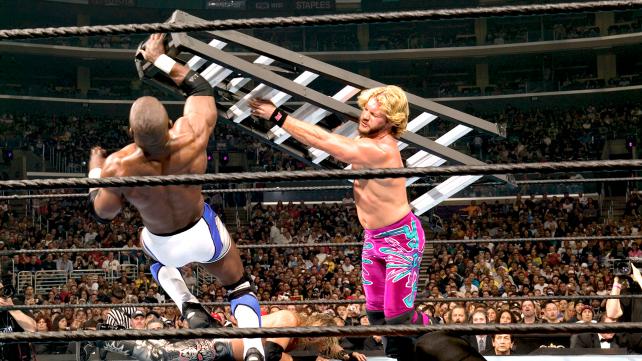 Money in the Bank – WrestleMania 21

In preparation for our adventure this Sunday to the TD Garden in Boston for this year’s installment of the Money in the Bank card, Professor Rozzero thought it prudent that I catch myself up on the series. Based on the timing of my exit from and return to wrestling fandom, I have never seen a Money in the Bank ladder match…blasphemy I know, I know. I love the concept and was very excited to watch the four MITB matches that were assigned to me. Let the good times roll!

First up is the first ever Money in the Bank ladder match live from WrestleMania 21. The participants are Chris Jericho, Chris Benoit, Shelton Benjamin, Edge, Kane, and Christian. My first impression is that this is a STACKED match. I’m a huge fan of Y2J, Benoit, and Edge. I’ve only seen Benjamin wrestle once before (as part of the World’s Greatest Tag Team) and was very impressed. Christian and Kane aren’t my favorite guys but they are certainly more than qualified to round out the field. As the final entrant makes his way to the ring, I am beyond pumped for this one.

This was a fantastic match. There is not enough space to here to give a full play by play, but let’s just say that these guys put on a show. The biggest highlights for me in no particular order: Benoit’s headbutt off the top of the ladder, Benjamin’s suplex on Edge from the top of the ladder, Benjamin running up the ladder and clotheslining Jericho, all of the multiple times that guys took out a bunch of different people by flying outside the ring, and Benoit fighting through the arm injury. What I loved about this match is that I thought it was over about 10 times and it just kept escalating. Benjamin, in particular, really impressed me again. He is a phenomenal combination of strength and athleticism and I still don’t know how he didn’t have a more accomplished career than he did. The one disappointment for me in this match was Christian. I expected a little more out of the “high flyer” given the format. Also, I wasn’t a huge fan of him being the only one to bring a “friend” to the ring.

The end of the match is just as good as the rest of it. Benoit looks to be on the verge of victory after headbutting Kane from the ladder. Just as the Rabid Wolverine is going to grab the briefcase, Edge drills him with a steel chair and snatches the victory and the title shot. Given the circumstances of the match, I was really rooting for Benoit to pull it out. He fought the whole match with a bad wing and that headbutt off the top of the ladder was just ridiculous. With that said, I have no problem with Edge taking it as he was a worthy winner in my opionion. One thing is for certain, the other MITB matches are going to have trouble living up to this classic! 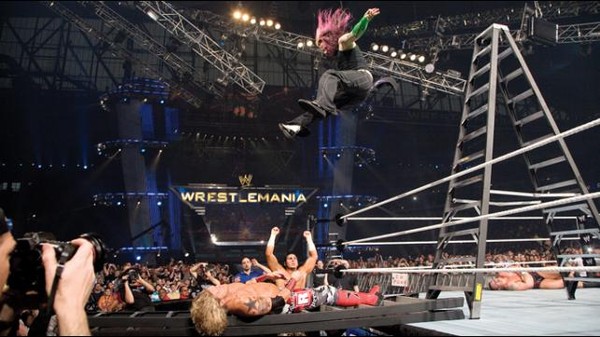 Money in the Bank – WrestleMania 23

For this installment of MITB the combatants are: Edge, Jeff & Matt Hardy, Randy Orton, King Booker, Mr. Kennedy, Finlay, and CM Punk. While this is not quite as impressive as the original MITB lineup, it is a solid group. In particular, I’m excited to see the Hardys compete in this format and also am looking forward to watching the young versions of Punk and Randy Orton perform. The one guy in the match who I have no familiarity with is Mr. Kennedy.

Again, there are a number of awesome maneuvers performed in this match (this seems to be a common thread). The Hardys didn’t disappoint as they perform multiple crazy moves. One move in particular stood out from the rest. Jeff Hardy hits a leg drop from the top of a ladder in the ring onto Edge who is prone on a horizontal ladder outside the ring. The ladder Edge is on literally breaks in half from the impact. Both guys get carried out on stretchers and I’m still not sure if they were actually hurt or if this was part of the angle. The good part is that we got to see such a crazy move. The bad part is that Edge and Jeff Hardy were both effectively eliminated from the bout. Another move that I thought was awesome was Randy Orton drilling CM Punk with an RKO off the ladder.

After the carnage of the Jeff Hardy/Edge situation, the match played out. Hornswoggle interferes at one point and tries to help Finlay but is drilled by Mr. Kennedy. To say I thought this whole spot was weak would be an understatement. Nothing about Kennedy really impressed me. With Edge out of the running, I found myself rooting for Orton to take the briefcase.  Alas, it wasn’t meant to be. Kennedy went on to win the match, snatching the victory away from CM Punk at the end. Maybe its because I’m biased towards guys I know, but I was pretty unhappy with this result. I felt the only worse choice for a winner would have been Finlay. Kennedy is just one of those guys who doesn’t do anything special and I felt he came off like a bit of a douchebag when he did open his mouth. Oh well, I guess that’s why I don’t work for Vince McMahon! Other than being a bit sour on the outcome, I thought the match was fantastic. The Jeff Hardy/Edge move alone makes it an instant classic. 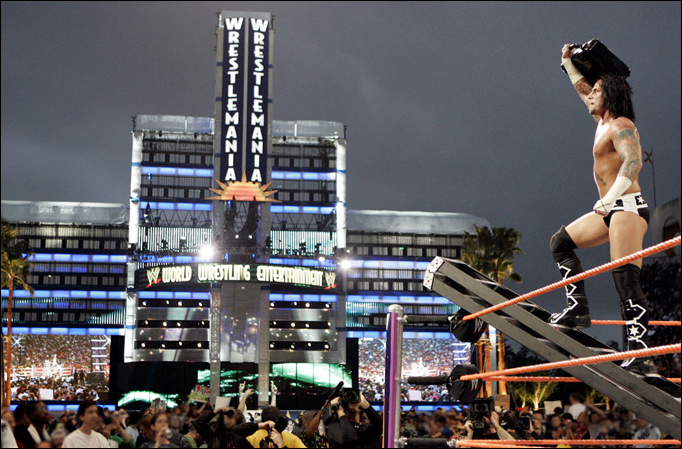 Money in the Bank – WrestleMania 24

Moving ahead one year, we are now at MITB from WrestleMania 24. This year’s participants are: Chris Jericho, Mr. Kennedy, Carlito, CM Punk, Shelton Benjamin, John Morrison, and MVP. In my opinion, this crew represents another step down from WM 23 (we are not exactly trending in the right direction). I’m excited to see Jericho and Benjamin back after some time off from the MITB matches. Also, Punk seems to have really gained some fans over the last year and I’m looking forward to seeing how he performs. Kennedy, Carlito, Morrison, and MVP are all weak in my opinion. I understand bringing Kennedy back as he is a former winner. Unless I’m missing something, the chances of any of the other guys (Carlito, Morrison, MVP) winning the match are slim and none…so why have them in it? The beauty of the MITB match from WM 21 was that literally anyone of those guys could have walked away with the briefcase and it wouldn’t have been completely far fetched. It definitely added to the drama of the bout. In this one, realistically Jericho, Punk, and MAYBE Kennedy have a chance. Everyone else is just filler. Maybe I’m off base, but that is how I see it.

Enough of the Cowboy complaining…let’s get to the action. This match featured a little bit less as far as WOW moments than its predecessors. However there was still some quality action. I’m normally not a fan of interference, but Matt Hardy coming in from the crowd and nailing the terrible MVP with the Twist of Fate off the ladder certainly qualified as a highlight. Benjamin, at this point my personal king of the MITB matches, had an insane spot where he hit a sunset flip/powerbomb/suplex and went falling through a ladder. This was completely nuts but also, as with Edge and Jeff Hardy in the previous installment, knocked Benjamin out of the contest with an injury. Also, Morrison somewhat proved me wrong by hitting a moonsault while HOLDING a ladder. Even MVP looked pretty formidable at times during the match. Two guys brought virtually nothing to the table for me: Kennedy and Carlito. Given that it was only a year ago that Kennedy actually won a MITB match, his star seemed to have faded considerably. It looks like the rest of the fans saw what the Cowboy saw with this guy…a bit of a bum. Carlito just seemed to be in over his head.

Shockingly, the match came down to Y2J and Punk dueling at the top of the ladder for the coveted briefcase. Jericho put up a hell of a fight and seemed on his way to victory when his foot became caught in the ladder. This opening was all Punk needed to snare the briefcase and the victory. The crowd was really, really into it and you can see that Punk is becoming a superstar. Overall, the right guy won this match. I would have preferred there to be a little more drama surrounding the outcome. Other than that, no real complaints. Another great MITB ladder match.

Money in the Bank – SmackDown MITB match from 2011 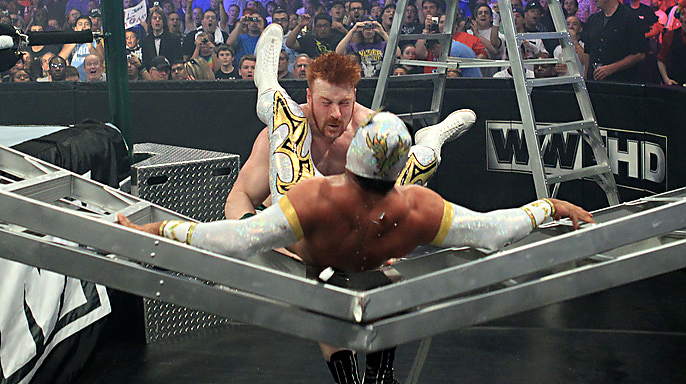 Last but not least we fast forward three years to the Money in the Bank PPV. The opening match is the SmackDown version of everbody’s favority ladder match featuring Kane, Wade Barrett, Sheamus, Cody Rhodes, Justin Gabriel, Heath Slater, Sin Cara, and everybody’s favorite wrestler Daniel Bryan. I’m beginning to sense that Professor Rozzero is messing with me with this match. As has been previously reported here on PTBN, the Cowboy is not a huge Daniel Bryan guy. Given his opponents here and the irony of it all, I’m guessing that the Yes Man takes this one. Knowing that there are multiple MITB matches on this card, I feel that this field is strong. Kane, Sheamus, and Bryan are all “A-list” talents and Barrett and Rhodes are both good dark horses. Gabriel, Slater, and Sin Cara all provide the complete disregard for their bodies that we love to see in a ladder match. This one should be fun!

The tradition of at least one participant in the MITB match being carted away by EMT’s continues as fairly early in the match Sheamus brutally powerbombed Sin Cara through a ladder, knocking out the high flyer. This match had considerably less high flying craziness as its predecessors that I previously reviewed. Having watched all of these matches back to back on the same night, the difference was even more apparent. Things went back and forth with each participant seemingly inches away from victory at one point or another. One particularly cool move had Kane chokeslamming Sheamus onto a ladder. Eventually Barrett (pre Bad News), Rhodes, and the lovable Bryan jockeyed for position on the top of the same ladder. Bryan does what he does best…snatching victory from jaws of defeat and winning the match.

Of the four matches I was asked to review this is clearly the weakest. That is a testament to how great these matches are as the 2011 version was certainly not bad. I begrudgingly admit that Bryan was excellent in this match and carried the action. I even found myself pulling for the little guy. I need a shower.

I hope that everyone is looking forward to this Sunday’s MITB pay-per-view as much as I am. This will be my second live PPV and I expect a great show. I’m going with Randy Orton in the main event and Seth Rollins in the co-main event. Until next time…Cowboy out!