For this week’s column, Professor Rozzero has tasked me with watching three different celebrity matches. Needless to say, these matches are a bit of a different animal than those that I’ve grown accustomed to. There are no titles on the line and the combatants have been given these opportunities based on their accomplishments outside of the ring in their specialized fields. The first match on my list pits the immortal “LT”, Lawrence Taylor, against big bad Bam Bam Bigelow in the main event at WrestleMania XI. Being a huge football fan at the time, I do remember the build up to this match but had never seen the match itself. Time to strap in and go to class!

My first thought about this contest is that I can’t believe it is the main event. I can’t imagine a celebrity match headlining WrestleMania today and I don’t agree with it here. The main event slot should be reserved for the most important wrestler vs. wrestler match available. With that said, they really went all out with the buildup to this match and I found it enjoyable. Being a huge football fan, it was very exciting to see all these great defensive players (Reggie White, Carl Banks, Rickey Jackson, Steve McMichael, and Chris Spielman) join forces with LT to keep the Million Dollar Man and his cronies from helping Bam Bam. When LT is introduced the crowd goes bonkers. I forgot just how big of a star he was at this time. As he makes his way to the ring it strikes me how much fun he is having. The best linebacker of all time is thoroughly enjoying his WrestleMania moment. He doesn’t give the impression that he is just there to collect a paycheck, which I appreciate.

Bam Bam Bigelow is certainly an imposing figure. He even pulls off the flaming leotard costume…this has to be at least as hard as recording three sacks in an NFL game.  Bam Bam’s head tattoos and surly demeanor make him the perfect foil for the football hero, LT. The match itself is about what you would expect from one of these types of contests. LT is clearly the superior athlete and he actually has a couple of good wrestling moves. In particular, his forearms to the head of Bam Bam are impressive. Overall, Bigelow carries the match (as he should). He lands a couple of headbutts on LT as well as works some submission maneuvers on the novice. Bam Bam appears to have victory in hand when he lands a beautiful moonsault off the top rope, showing unbelievable agility for a man his size. Unfortunately for Bigelow, he injures his knee on the landing and is unable to pin Taylor. This sets LT up for a comeback and he finishes off the big man with a flying clothesline off the second rope and gets the three count. The crowd goes wild and LT leaves victorious. This was a decent match for what it was and I thought having the other NFL guys outside the ring added some intrigue. However, even with Taylor’s star power, I feel it was a disservice to the wrestling fans to have this as the main event at WrestleMania. 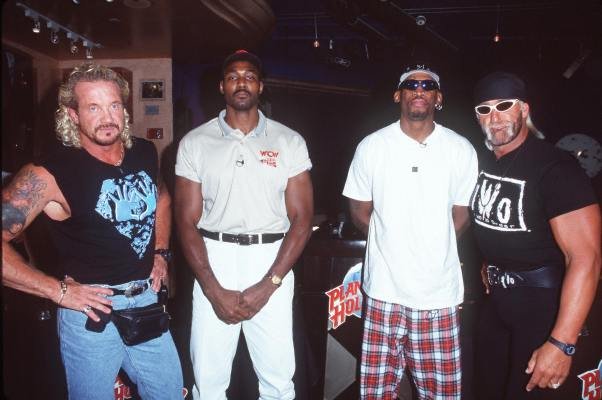 Of the three matches I was tasked with this week, this was by far the one I was most excited to watch. Karl Malone is probably my least favorite basketball player of all time and I couldn’t wait to see him look like a fool in a professional wrestling ring. The only comparison for the “Mailman” taking his talents off the court were his hilariously bad Rogaine commercials. This was going to be a train wreck and I was going to have a front row seat!

Hogan and Rodman make their way to the ring first. Rodman is at the height of his crazy, bad boy days and fits right in with Hollywood and the boys of the nWo. They are accompanied by The Disciple. The crowd is not particularly into it as, again, a celebrity match is moonlighting as the main event of a major pay per view. Next, DDP and Malone make their way to the ring. I hate to say it but Malone has the best physique of anyone in the ring and, like LT before him, seems to really be enjoying the moment. By contrast, Rodman looks like he’s on something mind altering.

The match starts and the thing that strikes me is the lack of action for the first ten minutes or so. Hogan is generally a bit of a staller, which I’m normally fine with because he is pumping up the crowd and building tension, but this is ridiculous. When the action finally starts up it is tepid at best. Rodman clearly has little wrestling experience and it is shining through. The heaviest action for the first 15 minutes of the match is Hogan and Rodman having DDP trapped in the corner and taking turns doing illegal maneuvers behind the ref’s back. Finally, DDP is able to get himself free and he tags in Malone. Here’s where things get interesting for me…

Like I said, I despise Karl Malone the basketball player. Karl Malone the wrestler, on the other hand, won a fan with this match. He is the lone bright spot in this debacle. He’s in the best shape, has the most energy, and seems to genuinely care about the proceedings more than anyone else involved. When he is tagged in by DDP he cleans house. He even breaks out the old school trick of knocking Hogan and Rodman’s heads together! It’s all Mailman! Eventually, DDP hits a Diamond Cutter on Hogan and Malone does the same to Rodman. This one is over. Not so fast…while the referee’s back is turned The Disciple hits what looks like a Stone Cold Stunner on DDP and lays Hogan on top of him for the pinfall. The nWo has stolen another victory. Malone is infuriated and lands the Diamond Cutter on both the Disciple and the referee. Even in defeat, the Mailman stole the show. Other than him, this match was pretty much a disaster. 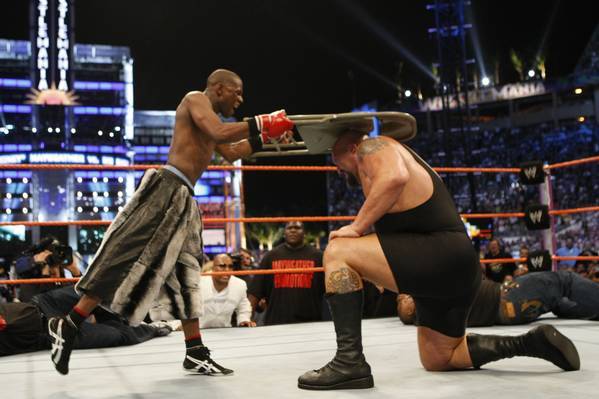 Last, but not least, we have Floyd Mayweather taking on The Big Show from WrestleMania XXIV. As some of you may know, I am a massive boxing fan and cover the sport for the folks here at PTBN. Needless to say, I was intrigued to see what type of wrestler Floyd would be. At this point in his boxing career he was known as a guy who would use his legs (i.e. run away) to win fights. My assumption was that that particular style wouldn’t be received very well by the WrestleMania crowd.  Floyd certainly has the personality to be the perfect wrestling heel and I’m excited to see him step into the ring.

It appears that Vince has learned something over the last thirteen years as this match is, thankfully, not the main event. By not closing the show, I believe the fans can enjoy the match for what it is without placing undue expectations on it. Mayweather is accompanied to the ring by his sizable entourage and is ready for action. Unlike the Rodman/Mailman stallfest I just reviewed, things pick up pretty quickly here. It is a classic big guy vs. fast guy bout as Mayweather is able to avoid the Big Show and land body shots on the giant. Mayweather’s actual profession gives him a leg up on some of the other celebrity wrestlers as he is able to land convincing punches from the get go.

Finally, Show is able to catch up with Floyd and does enough damage that Floyd decides he has had enough. He and his entourage are leaving the arena! The Big Show will have none of it, though. He races up the ramp, grabs Mayweather, and brings him back down to the ring. More damage ensues and Floyd looks to be in big trouble. It would be very ironic for Floyd’s prized possession (his perfect professional record) to escape him not in a boxing ring but in a wrestling match. The Big Show sets Floyd up for the chokeslam that will end his night when one of Mayweather’s posse hits Show with a chair. Show turns around and delivers the chokeslam to Floyd’s cohort but eats multiple chair shots from Floyd for his troubles. Finally, Floyd puts on brass knuckles, clocks the Big Show with a vicious right hand, and the big man is unable to beat the ten count. Floyd’s perfect record is in tact and a very fun celebrity match is concluded. Of the three matches I reviewed, this most resembled an actual wrestling match. Floyd brought his A game and did a good job. As of now, this is the “gold standard” for celebrity wrestling matches.

Teacher’s Note: Good recap here, Cowboy. I was tempted to see how you digested some not so stellar matches so nice work there. Celebrity matches can be tricky and I think we covered a nice spectrum. Next week, we see double vision with some of wrestling’s greatest tag team matches.