Greetings, members of Team Caliber’s Team! Since it’s October, I felt it best to have the next few episodes of the CWSTHH be all about my main man: Jason Voorhees. Instead of the usual Friday The 13th themed lists, I thought we’d take a look at the different looks of Jason from each film, as well as what lurks behind the mask. So put down the Zaxxon, as we go through part 1 of Jason’s appearances through the ages. 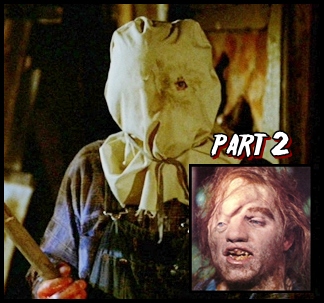 I decided to skip Friday The 13th and jump straight into adult hood Jason. Not too long after the events of the first film, we meet the fully grown Jason in what some consider not only his scariest, but his greatest look. While I prefer Jason in the hockey mask, I will admit that Jason in the potato sack is fucking scary. Mixed with his flannel shirt & overalls, both of which look like they had to wrestle a swamp monster or something, you’ve basically got a living nightmare. This guy could be living out in the woods next to you. Or in the mountains where you take your family camping. It’s incredibly creepy, and I’m surprised it hasn’t been more ripped-off.

Once the hood comes off we get one of the better reveals in the masked killer department, as Jason has a face that looks melted on one side, with teeth that appear to be carved out of wood and random smatterings of hair. Now, when the reveal does happen, it’s not a simple “take off the mask” type deal, you get this face in full force as he crashes through a window and grabbs Ginny. It’s awesome, and one of the reasons why part 2 is so beloved.

Once Jason hit the 3rd dimension, he felt it was time for a make-over. He stole some clothes from a shop owner, then killed him to avoid having to give them back. After a clean shave he was ready to go. Next to his look from part 7, this is Jason’s most famous. It’s simple, but there’s something about the green & grey that work with the hockey mask, especially when he’s mobbing around with the axe.

The face reveal works 2 fold, as we not only get to see the look, but Chris realizes that Jason was the man who attacked her in the woods so many years ago. Whether or not his intentions were amorous, and I believe they weren’t, is left up to the audience. As for the look, it’s not bad, but one of my least favorites because with the sharp teeth and the high cheek-bones, Jason looks more like a vampire, or something to that effect. But I do have to give props to the way he conveys emotion, showing a hint of delight at Chris’ sheer horror due to the revelation of who he truly is. Awesome stuff. The last 3rd of the this movie makes up for the slower first 2 acts, as the chase & fight between Chris & Jason is fantastic, one of the series best. 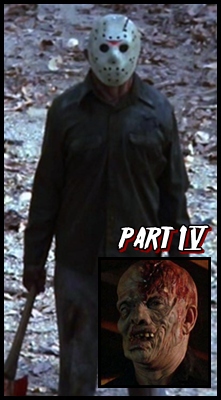 Before I get into it, yes, I know the above full-body shot is taken from A New Beginning. I just couldn’t find a photo of Jason from part 4 I liked, and Tommy’s hallucinations are that of Jason from The Final Chapter, so, in a maze of circular logic, it counts.

Anyway, there’s not much different here from part 3, as it takes place over the next couple of days. The only new additions are Jason looking a bit musty, as well as having a huge gash in the mask from the axe used in part 3. As I said earlier, a lot of people feel Jason is at his scariest in part 2, but I think that honor belongs to part 4. The look, along with the acting of Ted White made him terrifying. He’s damn big in this film, and there’s something in the eyes. Great stuff.

Once we get to the reveal, which is one of the series best, we see the fantastic work of Tom Savini. Jason looks closer to his appearance in part 2, looking more human than monster, but still completely gruesome. Does anything beat when Jason is sliding down the blade? What a scene. 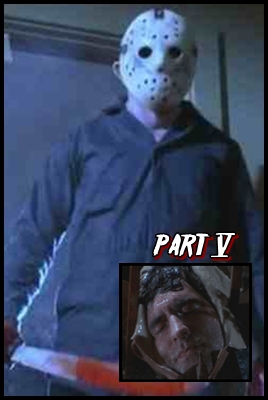 Of course, it’s not really Jason in Part V, which is seemingly everyone’s only reason for hating the film. Your scribe finds that ridiculous, by the way. I’m going to talk about the look anyway, because, hell, the look is Jason. Nothing too creative for this one, as he was given Mike Meyers’ jumpsuit, and a hockey mask with blue diamonds. I actually dig the look to be honest, and think it fits with the look & feel of the film. People can bitch about the movie all day long, but you have to admit that when he finally comes into frame, busting through the door, it’s pretty damn awesome. I applaud them for trying something new, but when you’re 4 films deep, 3 of which feature the same villain, it’s clear what the people want.

As for the reveal, well I personally think it sucks. I mean, am I the only one here who thinks that the shot up there looks absolutely nothing like Roy? If it hadn’t been explained by the sheriff in the end, I would have wondered what Paul Reiser was doing killing kids in a half-way house.

For years it seemed like the Scream series was going to be the only worth while slasher films. However, in the year 2006, Adam Green released Hatchet, a film he’d both written & directed. A simple story about a killer lurking in the southern swamps who stomps the colons of anyone stupid enough to mob up into his territory. And as we all know, there’s always an abundance of stupid people. With Kane Hodder playing the monster Victor Crowley, and some of the most creative & fantastic kills you’ve ever seen, Hatchet delivers in terms of quality not seen since the hay-day of slasher films.

The horror/suspense/thriller anthology TV show has been done just about as many times as the sit-com. It’s rare they ever last, and even if they do, odds are they aren’t very good. However, with NBC’s short-lived series Fear Itself, they delivered consistent quality not seen since the Twilight Zone. I know that’s a pretty big claim, but it’s true. They covered everything from the traditional vampires, werewolves, and flesh-eaters, to body-switching, and simple serial killers. Sometimes they’d deliver a hell of a twist, and sometimes they’d tell a straight forward story. Now because the show was so damn good, it was only on for two months, and then quickly cancelled. I’m sure Chuck Lorre had another great idea for a show that’s extremely unfunny and drenched in laugh tracks.

Bat In The Sun Productions was a company that simply started out creating Batman themed fan-films. Their high production values & well delivered material made them pretty popular with the quickness, and soon they started their own internet show known as Superhero Beat Down. The premise is that fans vote on a showdown, and then the fight is filmed, with the winner based on the voter outcome. They’ve created some awesome pieces of work, with their best being the one I’m presenting today; Batman vs Deadpool.

Alrighty, that’s it for your boy today. Join me next week when we take a look at the blood-slick styles of Jason Voorhees from Friday The 13th’s part 6, 7, 8 and 9. If you want to hollar at cha’ boy, feel free to do so at caliberw@hotmail.com. If you’re dying for more Caliber, head on over to Str8 Gangster, No Chaser. There you can find all of my past articles, my other websites, as well as my books. Enjoy responsibly.