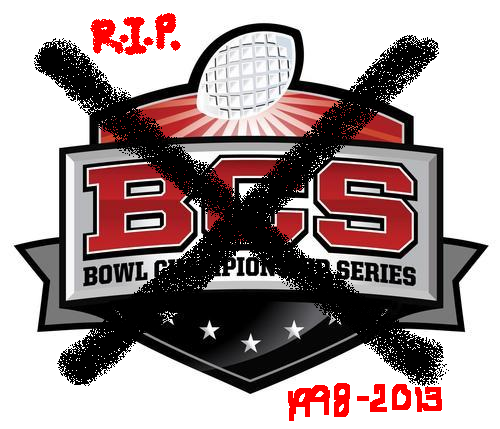 Be sure to check out Volume One, Volume Two, and Volume Three of our B.C.S. Busters series!

Andrew Riche: Oh, dear Lord, here it is. I personally was delighted by this season because my LSU Tigers under Les Miles wound up winning the national title game against Ohio State in the Superdome, but for the many people who love to throw daggers at the way the B.C.S. was set up, this year was the go-to case. LSU and USC were the top two teams to start the season, then USC went down early at home in a shocker to Jim Harbaugh’s Stanford team, knocking them out for good. A week later, LSU lost in triple overtime at Kentucky. Ohio State then took the top spot before losing in November at home to Illinois, putting LSU back to #1 and Oregon at #2. The next week, Ducks quarterback Dennis Dixon tore his knee and Oregon lost their last three games. Oklahoma had a chance, but lost in November at Texas Tech. Three other #2 teams in October were South Florida, who ran out of gas down the stretch, Boston College, who lost to Florida State and Virginia Tech in November, and Cal, who… I don’t even know HOW the fuck that happened. Then came the final two weeks, and things got even weirder. #2 Kansas was unbeaten with a weak schedule before losing to Missouri, who then rose to #1 after LSU lost in triple overtime once again, this time at home to Arkansas. Georgia lost two games in the first six weeks, but was the hottest team in the country at the end of the year despite not being able to play in the SEC Championship Game, where LSU beat Tennessee. That same night, #1 AND #2 went down as Missouri lost the Big XII title game to Oklahoma and Big East champ West Virginia was shockingly defeated at home against lowly Pittsburgh. Virginia Tech wound up in the top three, but they lost their case because they were obliterated at LSU  48-7 back in September. And the only unbeaten team left in the country was pass-happy Hawaii out of the WAC, who were destroyed by Georgia in the Sugar Bowl. Hence, LSU with two losses went #2 and Ohio State, after beating Michigan, went back to #1. After beating Ohio State 38-24, LSU remains the only two-loss national champion in the B.C.S. era. Did I get it all? Okay. Phew.

Andrew: As you can read above, 2007 was the year of no truly great teams, just a lot of pretty good ones, and the eventual champion was going to be the one who did not lose at the end. LSU did lose two games, but as Les Miles famously said, they were undefeated in regulation in the toughest SEC schedule I can think of, beating six ranked teams in their own conference. The Big Ten was going downhill at this point in history, but Ohio State only lost once and had a solid defense. I would still put the Buckeyes at #1 and LSU at #2. Georgia is my pick at #3, giving LSU yet ANOTHER good SEC foe to fight off in a fitting way. In a pinch, I would take Virginia Tech over Oklahoma simply because OU’s losses were against lesser teams (Colorado and Texas Tech). I hate leaving Missouri out because they were very good, but they simply did not win their conference. (1. Ohio State, 2. LSU, 3. Georgia, 4. Virginia Tech)

Todd Gessling: I was a sophomore at Mizzou during the 2007 season. That year’s Tiger team was the best I had ever seen, maybe until this year, with the results of the 2013 squad TBD. Heisman finalist Chase Daniel was one of the most accurate college quarterbacks of all time and Jeremy Maclin is about as dynamic a weapon as any team could ask for.  The only problem was the one team Mizzou could not beat, Oklahoma, was their foe in the conference title game. I think a lot of us look back on these few years as the “Tebow Years”, when Sam Bradford, at least in 2007, was one of the greatest college quarterbacks ever. He lacked some of the excitement and athleticism (from a highlight reel standpoint) of some of his peers, but the guy could throw the ball as good as anybody I’ve ever seen. This was also the beginning of Oklahoma losing to awful teams like Colorado, but showing up 110% against Mizzou no matter what, but I’m not going on a tangent here, I swear. I think there wasn’t enough souring yet to keep Ohio State out of the national title game, plus going undefeated in the Big 10 was still a very proud accomplishment. I think Georgia was just as good a team as LSU, but their resume just didn’t add up.  What 2007 did start showing was how tough and dominant the SEC was about to become, but regardless, LSU lost to a ranked (yes, ranked) Kentucky team that was actually decent that year and a regrettable loss to Arkansas that ended up not mattering. I think there was a lot of madness and excitement the last few weeks of the season, but the final rankings were pretty spot on, if you were going for equity. 1. Ohio State, 2. LSU, 3. Georgia, 4. Oklahoma.

Nick Duke: Ohio State is a clear No. 1 by virtue of only having one loss in a season where every other major contender had two. From there, it gets a bit iffy. It’s important to remember that before the final week of the season, Missouri, West Virginia, Ohio State and Georgia were ranked the top four teams in the country. After Missouri and West Virginia lost, Georgia fell to fifth somehow. I’d argue that was a result of voters attempting to determine what the title game matchup was going to be, rather than actually ranking who they felt was the best team at the time. Under a different system, I think Georgia would have had a strong argument to be ranked No. 2 ahead of LSU, even though LSU did win the SEC. It’s really splitting hairs at this point, but I’ll put Georgia No. 2 and LSU No. 3. There are many teams that could be considered for the No. 4 spot, whether it’s Missouri, Oklahoma, Virginia Tech, USC, Kansas or Hawaii. Personally, I watched Virginia Tech get dismantled by LSU, which is just too much for me to discount. Hawaii played practically nobody all year-long, so they’re out. Oklahoma defeated Missouri in the final week, making it an argument between Oklahoma, USC and Kansas. Unfortunately, I’m going to go with Oklahoma by virtue of their impressive win over Mizzou. (1. Ohio State 2. Georgia 3. LSU 4. Oklahoma)

The Decision: Despite the loss to Illinois, Ohio State is #1 as the only one-loss team left. The SEC takes up the #2 spot (LSU) and #3 spot (Georgia). Oklahoma gets the fourth spot after beating up on Missouri in the Big XII Championship Game.

Andrew: The best team all year in the SEC versus by far the hottest team in the SEC at that point. Georgia and their blackshirts were on fire since their win over Florida in Jacksonville, and Matthew Stafford and Knowshon Moreno versus the limitless talent of LSU would have been a sight to see. As it was all year for Les, I’ll take LSU in a game that comes down to the last drive. In the 1 vs. 4 matchup, it really comes down to strengths taking advantage of the other team’s weaknesses, and while Oklahoma’s defense was soft, Ohio State’s defense was slow and unchallenged. Sam Bradford would have made things rough on them. OU wins comfortably.

Todd: This is an interesting matchup. Two teams that do everything they can to blow big postseason opportunities. Tressel and Stoops are almost dopplegangers in a lot of ways, but Stoops had a lot more explosive and formidable brand of football this particular year. Bradford is too good for OSU to stop, they get embarrassed on the national stage 38-17. For the SEC teams, I will take Les Miles in this matchup. I think that Mark Richt is a great coach, but this sort of game just screams to me that UGA would keep a lead well into the fourth, until the Mad Hatter does some trickery that wouldn’t work 9 times out of 10 but somehow puts the Tigers ahead, 28-21.

Nick: I’ll start with the easier game to pick, which is Oklahoma over Ohio State. Ohio State clearly deserved the No. 1 seed, but I would have picked any of the top 5 or 6 teams in a head-to-head matchup. Much like 2013, the Buckeyes just weren’t challenged most of the way and would have been steamrolled by a tougher, faster, more prepared Oklahoma team, which isn’t something I usually make a habit of saying about Oklahoma. As for the other game, it’s a real shame that Georgia wasn’t playing a bit better earlier in the year so we could have gotten this in the SEC title game. Both were very good in 2007, but under a playoff system, as the NFL and MLB have shown us, you have to give the team with the most momentum the slight advantage. Georgia was on fire after beating Tim Tebow’s Florida Gators in Jacksonville that year. Knowshon Moreno was pretty much unstoppable down the stretch, and Matthew Stafford was playing the best football of his Georgia career. LSU would have been a tough out, but Georgia was just too hot. Georgia wins 34-20.

Andrew: We get a rematch from the 2004 Sugar Bowl that the B.C.S. actually selected to the rage of many. LSU is feelin’ pretty lucky, like they did all season long, after another tight win over an SEC foe in Georgia, and their mojo would have overtaken the Sooners. Oklahoma was figuring it out on offense, but their defense was still pretty shaky, and LSU had one of the best running attacks in the nation that year run by Gary Crowton. LSU wins 35-17.

Todd: No way I can vote in confidence for “Big Game Bob” against an SEC team for the national title.  LSU wins rather comfortably 28-17.

Nick: The SEC is just too strong. LSU cruises here. 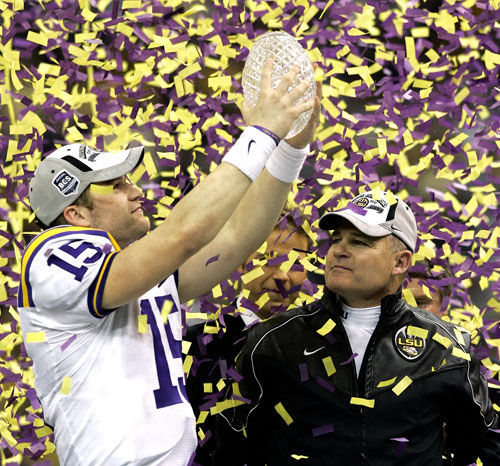