Every time Scott and Justin build their all-time cards, I will do the same, offering my commentary on the PiCs’ selections. Here’s their June PPV card episode.

-One match must be selected from each year

-The WWF/WWE, World, Intercontinental and WWF/WWE Tag Team titles must all be defended 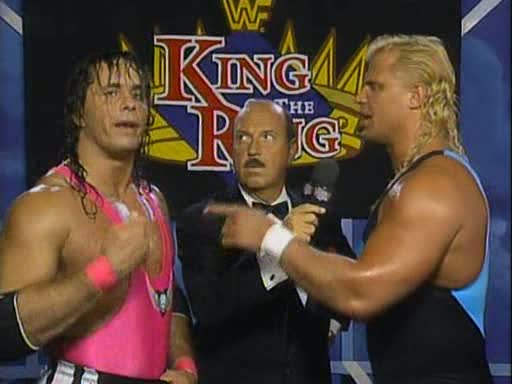 Ben’s Take: Slam dunk opener that made perfect sense (I hate myself). As I seem to be saying frequently with these, you lose Bret Hart quick so you take his best match early, and here it’s the same with Perfect, plus this would be at the top of any King of the Ring compilation besides.

Ben’s Take: It’s all just a matter of which Owen Hart match from the King of the Ring tournament you’re going to pick in 1994; Scott and Justin went with arguably the best from an in-ring quality-sense in the 1-2-3 Kid one, I elected to take a bigger star with Razor Ramon as well as the added historical significance of the it being the finals. Given that Owen/Kid only goes a few minutes—good minutes, but still—I don’t regret sacrificing a touch of work rate here.

Ben’s Take: Here, the boys go the star power route with Diesel and friends, but I certainly don’t counter with quality. The 1995 King of the Ring could arguably be the worst WWF show of all-time, so you’re not going to find a decent match anywhere up and down the card; rather than shy away, I leaned into it, opting to give whoever’s viewing my card the full experience of a furious Philadelphia crowd venting their worst feelings toward Mabel being crowned king; call it a curiosity pick.

Ben’s Take: Usually when you pick an Intercontinental title match, you look for a crazy athletic classic, but here you’ve got the opposite: a somewhat clumsy match, but one backed up with wild intensity and awesome character work; he may not have lasted, but it’s nuts how over Ahmed got in 1996 and this moment marks his peak of popularity.

Ben’s Take: Two all-time greats having a back and forth classic they wouldn’t be able to touch the next year in the main event of WrestleMania; they both have other ok matches on future June shows, but nothing that touches this. 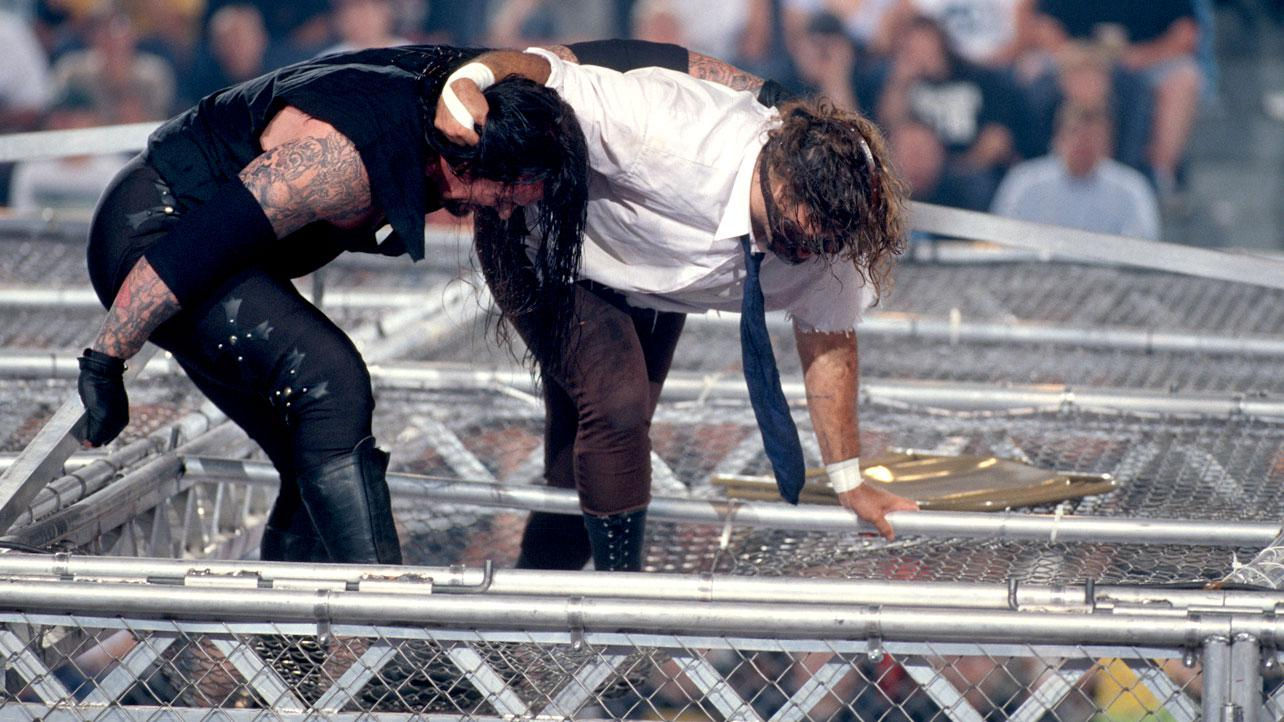 Scott & Justin’s Pick: The Undertaker vs. Mankind in a Hell in a Cell match

Ben’s Pick: The Undertaker vs. Mankind in a Hell in a Cell match

Ben’s Take: Not a great match, not even a good match, considering what these two have pulled off together, but come on, you’re not picking this one for holds, you’re picking it for spectacle. It’s well worth sacrificing any four star matches Taker and/or Foley had in June at some point to get Mick flying off the Cell on your highlight reel.

Ben’s Take: Really a toss-up here, as the 1999 King of the Ring did not have any standout matches, and the only one even remotely memorable burns out your use of Steve Austin. While Scott and Justin took the novelty of Chyna against a guy, I decided to include a bigger name in Kane and the eventual King of that year with Gunn; neither makes or breaks anything.

Ben’s Take: The other reason I didn’t take Road Dogg/Chyna in 1999: I wanted to get this match. Certainly not a technical classic, but it’s a nice little snapshot of Attitude Era craziness in terms of gimmicks, I don’t really have any multi-person matches yet and it’s nice to include the Dudleys in addition to balance of DX; this one checks off a lot of boxes. 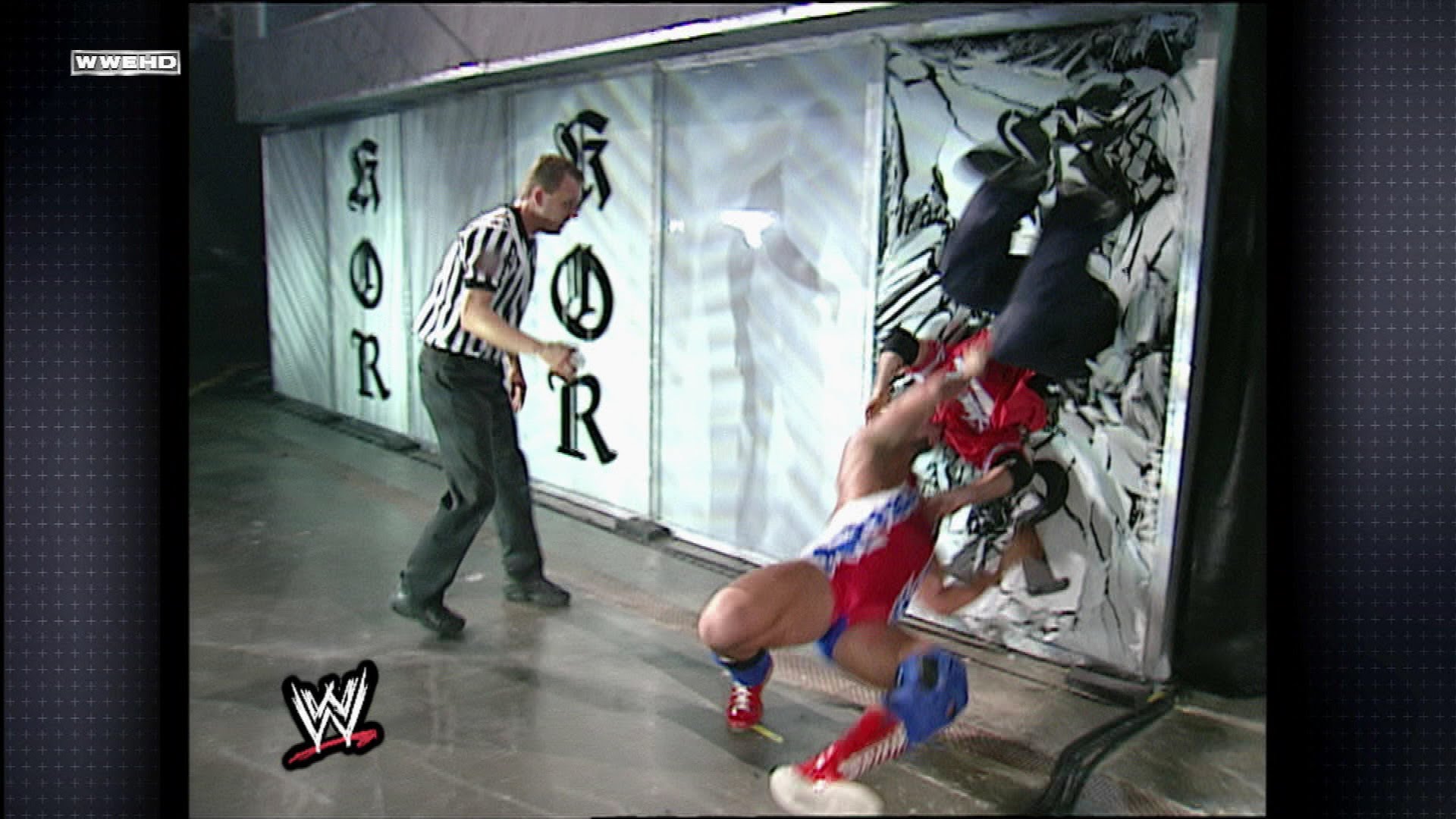 Ben’s Take: Amazing to think that a stud like Kurt Angle’s best match in June—and perhaps one of his most memorable matches ever—came not against another full-time competitor, but it’s a testament to the boss’ son as Shane-O-Mac always brought the goods. A spectacular hardcore war with brutal violence and bumps that Shane probably shouldn’t have been taking, showcasing Angle at his best.

Ben’s Take: Not the most memorable encounter in the world considering who’s involved, but a solid contest that could be considered a minor dream match. Not much to say about this one other than when you’re picking a card like this and see these two names across from each other, even if you’ve never seen the end product, it’s worth the gamble.

Ben’s Take: Necessity pick from a weak card that only had good matches involving guys and titles better served elsewhere; nobody clamored for this feud at the time and it’s not even a “so bad it’s good” scenario like Steiner and Triple H from earlier in the same year.

Ben’s Take: Obviously a lot of similar picks going down the line as this all-time card kind of falls into place once you take a hard look at who’s available and what you can get. Not Rey and Chavo’s best match, as it had more to do with salvaging the Cruiserweight title following a rough spring of 2004, but they never had a bad one. 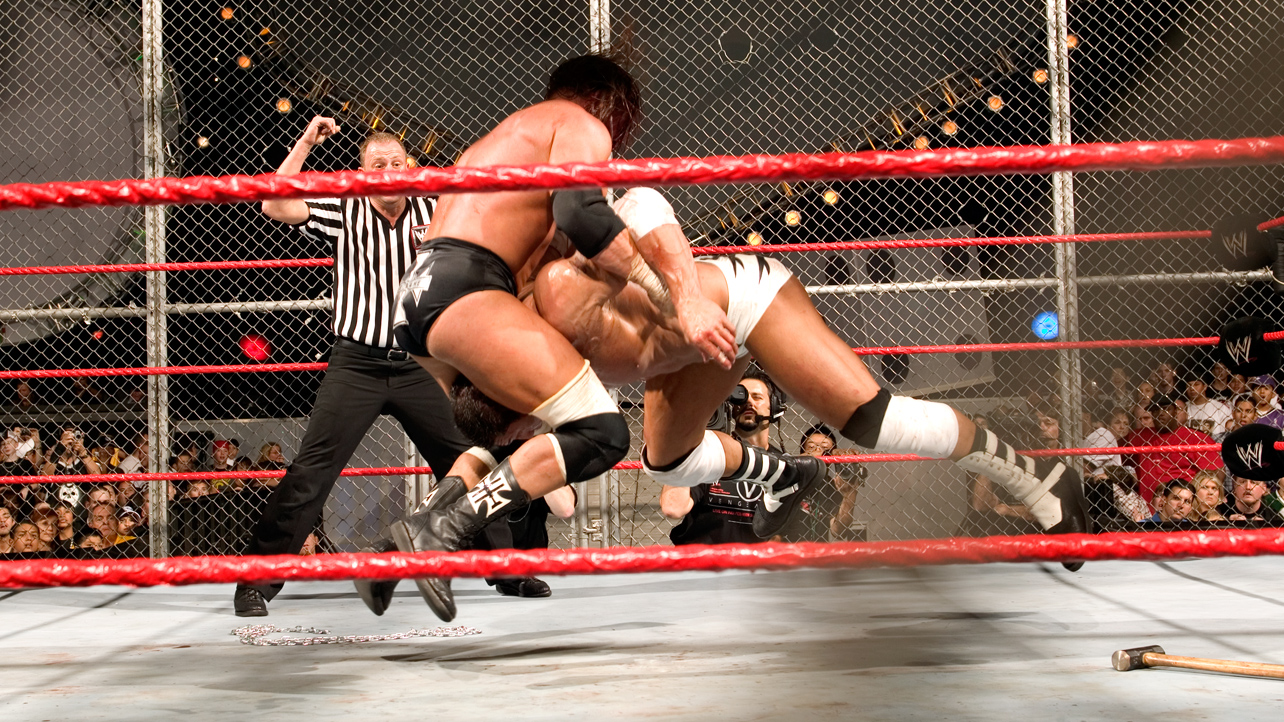 Scott & Justin’s Pick: World Champion Batista vs. Triple H in a Hell in a Cell match

Ben’s Pick: World Champion Batista vs. Triple H in a Hell in a Cell match

Ben’s Take: The best match of this feud between student and teacher, a classic World title match and maybe the greatest use of Hell in a Cell that relied more on psychology than big bumps or a lot of blood; this one makes a lot of all-time lists. There’s a temptation to grab something from ECW One Night Stand for nostalgia and variety’s sake, but this match proves impossible to pass up. 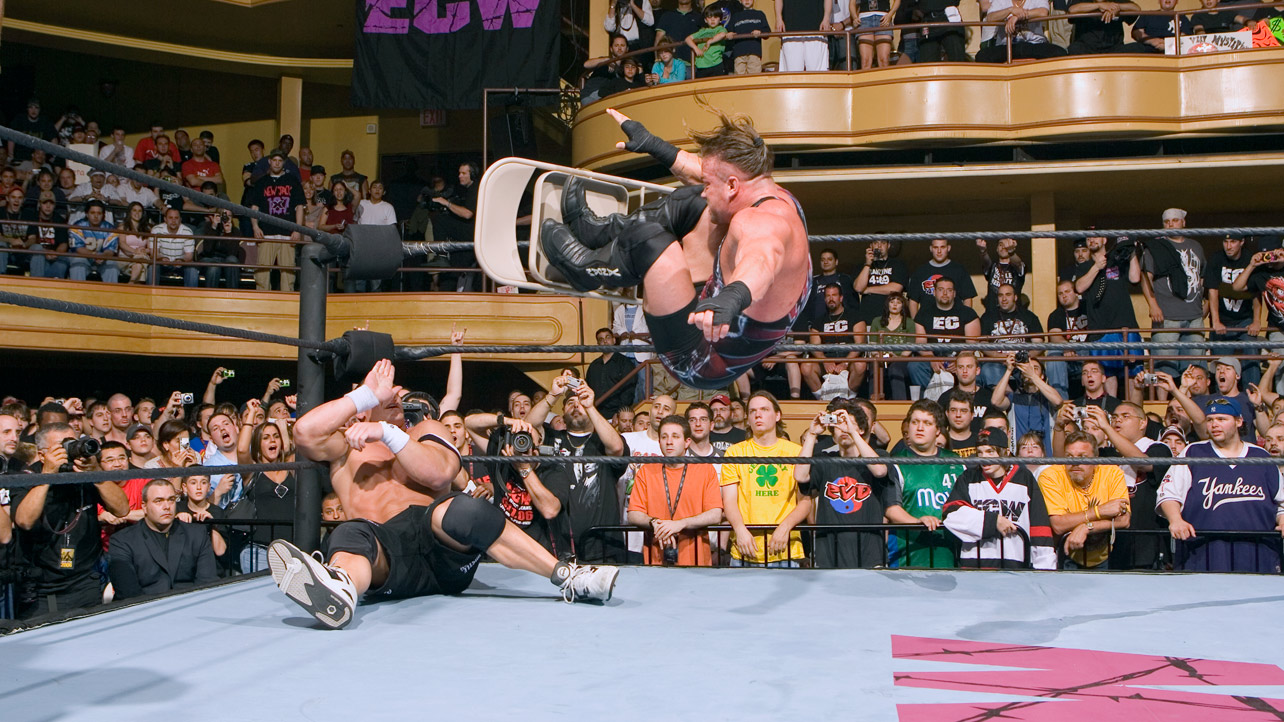 Ben’s Take: A decent enough match, but it’s the nuclear crowd heat that elevates this to classic status. I know Justin hemmed and hawed a lot about picking this over the Intergender Tag match on the same One Night Stand card, but while I dig that one a lot myself, I think you need this one for historical value, particularly to get a really memorable WWE title match in the mix.

Ben’s Take: Wow, the similarities continue; can’t go wrong with the masters of the Ladder match against one of the most underrated teams in WWE history with gold on the line.

Scott & Justin’s Pick: Beth Phoenix vs. Melina in an I Quit match

Ben’s Pick: Beth Phoenix vs. Melina in an I Quit match

Ben’s Take: I think Scott and Justin took this as a “nothing else left” pick, but I see it as a great value steal, as you’ve got Beth Phoenix just coming into her own as one of the most legit female wrestlers of the past decade against an opponent in Melina who could make her look like a killer and a stip you never see with the Divas. 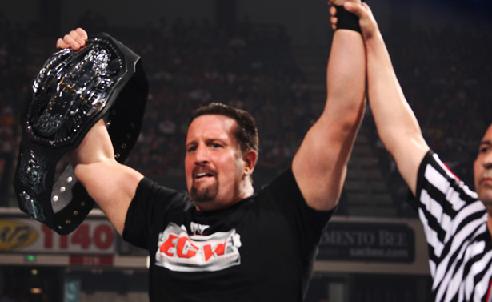 Ben’s Take: Not only a fun match, but the feel good nature of Tommy Dreamer as ECW Champion would prompt me to give serious thought to including it even if it had ended up middle of the road.

Scott & Justin’s Pick: The Hart Dynasty vs. The Usos & Tamina in a Mixed Tag match

Ben’s Pick: The Hart Dynasty vs. The Usos & Tamina in a Mixed Tag match

Ben’s Take: At this point, titles become more of an issue than wrestlers, as we’ve used up the major belts and they tend to monopolize the best matches. This could be considered a sleeper, however, with some promising if green workers in the Usos, plus Tyson Kidd and Natalya could always go.

Ben’s Take: Scott and Justin picked the hotter feud, as believe it or not Alex Riley had amazing crowd support in 2011, but I opted for Kofi and Ziggler, who have probably never had a bad match despite wrestling like a million times over the years, and I got the U.S. title on there to boot. Given what ended up happening with A-Ry—and I liked the guy!—I feel confident on this one, plus I certainly don’t mind leaving off Miz (no offense).

Ben’s Take: Another necessity pick, but not the worst match, as Hunico could always get the best stuff out of Sin Cara. 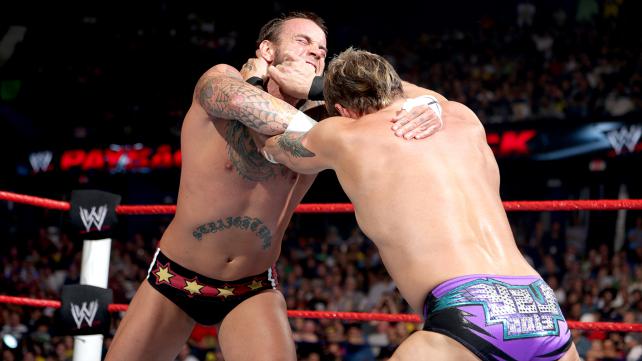 Ben’s Take: And we finish with another no-brainer, as Punk returns from a brief hiatus in front of his hometown crowd, rabid for him, and faces one of his best opponents in Y2J.

Ben: Interesting month as up and down my card looks virtually identical to Scott and Justin’s, so obviously not a lot of wiggle room when it came to picks. It’s hard to make much of an argument that I did better than them or vice versa because I took Owen Hart/Razor Ramon over Owen Hart/1-2-3 Kid or managed to get the 2000 Tables/Dumpster match on there. I guess it’s worth noting that none of us managed to find a place for Edge, Randy Orton or Daniel Bryan, but what can you do. Not the most exciting installment of this column, I suppose, but looking up and down, the cards came out ok with some bonafide classics and decent sleepers in the mix.