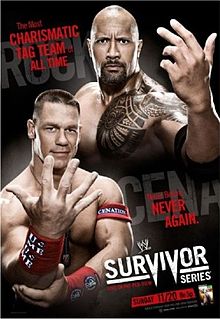 On Nov. 20, WWE presents the 30th annual Survivor Series. We’re only days away, so as we move towards the event, let’s take a look at how the former Thanksgiving tradition has evolved over the years.

In 2011, the Survivor Series was all about AWESOME TRUTH!

It was the longest build to a WrestleMania main event WWE had attempted in years. The Rock and John Cena were scheduled to face off at WrestleMania XXVIII, set up shortly after the Rock interfered in Cena’s title shot at the Miz at WrestleMania XXVII. But a year is a long time to go between a match announcement and the actual match, and WWE needed to get the part-time People’s Champion and the Face of the Company in the ring after several promos against each other. So, the main event of Survivor Series was set. The Rock would team with John Cena against the new threat of Awesome Truth – The Miz and R-Truth.

Of course, it would have seemed more necessary for Cena to call the Rock in for reinforcements if Cena hadn’t been able to beat both guys at the same time on several occasions.

Obviously, there was no doubt to who would win the match, no offense to Miz or Truth meant. So, the intrigue in the match was whether Cena and the Rock, soon-to-be opponents, would be able to get along or even work together. Even with a bit of bickering, the super-team was able to take down their midcard opponents in the main event of one of the Big Four pay-per-views. And then, after Awesome Truth was dispatched, the build to WrestleMania continued.

Best Match: CM Punk defeated Alberto del Rio (c) – WWE Title Match. The Summer of Punk didn’t really go the way fans hoped… Sure, he beat John Cena at Money in the Bank, walked out of the company for a few days and came back to challenge Cena after Cena won the replacement WWE Title to unify the championships. And then disaster. Kevin Nash hit him with a jacknife and Del Rio cashed in his briefcase. Survivor Series was Punk’s one-on-one rematch for the title, and all the shenanigans with Triple H and his buddies was all over. Punk and Del Rio put on the best match of the night and kicked off Punk’s record-breaking modern-era title reign. It’s a shame he always played second fiddle to Cena.

Worst Match: Big Show beat Mark Henry (c) by DQ – World Heavyweight Championship Match. The World Heavyweight Championship is really on a bad streak here in terms of matches. Both these guys can be a part of a good match, but that wasn’t happening here. While Henry’s Hall of Pain run was better than expected, they were just killing time until Daniel Bryan was ready to cash in his Money in the Bank briefcase.

Elimination Match of Misfit Toys: This year’s Survivor Series match featured a bunch of guys who should have ended up better than they should have. Surprisingly, four guys in the match – Randy Orton, Sheamus, Jack Swagger and Dolph Ziggler  – would win World Titles, but there were others in the match who should have probably gotten better opportunities, like Wade Barrett, Cody Rhodes and Mason Ryan. I honestly had no recollection of Ryan until he came down to the ring as a member of Team Orton. He had a good look. But, he didn’t last in the match or in the WWE. In the end, Barrett and Rhodes took the win after overpowering Orton.

First Impressions: Ziggler’s appearance in the elimination match wasn’t his first appearance for the evening, as he kicked off the show defending his United States Title against John Morrison in a fun opener. The match was knocked down a bit by the crowd chanting for local boy Zack Ryder, who was gaining popularity through his YouTube shows. Ziggler beat Morrison and then got attacked by Ryder to pop the New York City crowd who wanted him in the match.