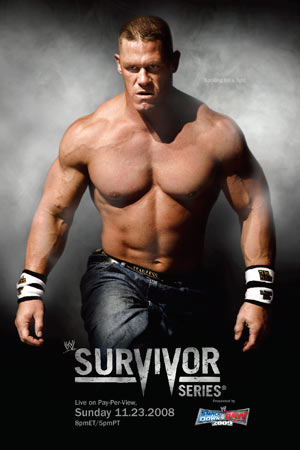 The 2008 edition is based around the mystery of who attacked Jeff Hardy.

From one-half of a popular tag team all the way to the main event and fighting for the WWE Title, Jeff Hardy’s rise to prominence was pretty impressive. Now, I admit that I’ve never been a huge fan, but even I have to admit that Jeff Hardy fought his way up the ladder in a way that few would have expected. He had been battling Triple H for the WWE Title and scheduled to be in one of the evening’s main events, fighting for the title against the champion and Russian bruiser Vladimir Kozlov.

But before the show started, word began to circulate that Hardy “was attacked” in a stairwell, and when the event kicked off, there was speculation that Hardy wouldn’t be in the Triple Threat match because of the attack. Watching it live, back in 2008, it felt like a pretty tasteless angle, especially since it was clear it was an angle. Watching it again eight years later, it was just a bad storyline, especially since it took until the Royal Rumble to get the payoff.

With Hardy out of the match, Triple H defended the title against Kozlov in a one-on-one affair until SmackDown general manager Vicki Guerrero walked out and excitedly introduced Edge, who had been out of action for a few months, as the third participant in the match. Did Edge attack Jeff Hardy? Well, no, but we didn’t know that yet, and Hardy charged the ring to get at Edge, but he inadvertently helped Edge win the match and the WWE Title when both Triple H and Kozlov got hit with a chair.

The Survivor Series was the opening salvo in a story that led to Jeff Hardy dropping down from the main event to a midcard feud with his own brother Matt.

The two members of Evolution who represented the future explode – with a bunch of other guys on their sides. There were any number of stories running through the match, as Orton had beef with both Batista and CM Punk, and it also seemed like he had some issues with his own teammate, Cody Rhodes. With the card structured the way it was, the guys in the match stole the show in the middle of the card, with some really fun, fast-paced action, with Orton and Rhodes coming out on top. Orton would be back in the title picture soon enough.

What a terrible, plodding match. It’s amazing that The Undertaker went from this feud with Big Show – a ridiculously bad series of matches that no one wanted or cared about – to one of the greatest matches in WrestleMania history against Shawn Michaels just a few months later. All of a sudden, Big Show is afraid of caskets? And again, The Undertaker is borrowing his brother Kane’s abilities to start fires as he tries and stops Big Show from leaving the arena. The match was a mess from start to finish.

What Else Is There?: With a traditional Survivor Series elimination match kicking off the show, ring announcer Lillian Garcia announced to the fans watching that, “The ONLY way to be eliminated is by pinfall, submission, disqualification or countout.” Is there another way that I’m missing? I thought that was all the ways…

What A Team: I really think the combination of Shawn Michaels, The Great Khali, Rey Mysterio and Cryme Tyme may be the oddest combination of superstars to ever be thrown together in a match. And yes, that includes the Wild Card match in 1995. Just putting Khali and Mysterio together on the same team is madcap, the tallest and the shortest guy on the roster. Michaels, Khali and Mysterio survive, beating JBL, MVP, Kane and Miz and Morrison.

Year of Returns: 2008 was a special year for John Cena. He got a HUGE pop from the crowd at Madison Square Garden when he entered the Royal Rumble after being out with an injury for a few months. And he comes back from another injury here in his home state of Massachusetts, fighting for the World Heavyweight Title against Chris Jericho, who of course is no match for Cena.

At this point, it’s going to take a damn fine match to break into the Top 10, as all of these matches include iconic Survivor Series moments.

The Heartbreak Kid continues to put distance between himself and the Rock, while Randy Orton climbs into a tie to round out the Top 5 with some very famous company.