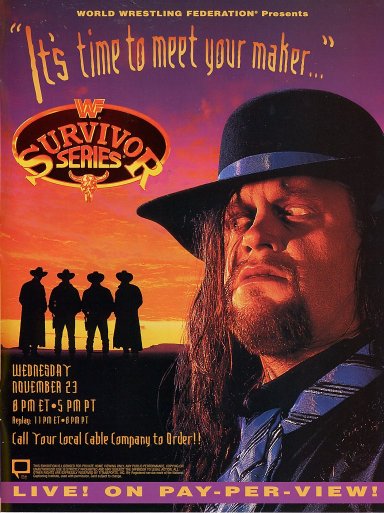 This time around, we get another WWF Title switch.

This year, the WWF finally settled on a format for the Survivor Series that would … ahem… survive for a good long time – a mixture of some elimination matches and regular one-fall events. As has been the case before with the Survivor Series, the main event takes place in the middle of the show, as Bret “Hitman” Hart defended his WWF Title against crazed old man Mr. Bob Backlund, who snapped on his comeback trail after losing to Hart back in July.

Vince McMahon frequently compared Backlund’s search for his second WWF Title to the title comeback of boxer George Foreman, who beat Michael Moorer earlier that month to win the IBF and WBA titles. So, maybe it shouldn’t have been that big a surprise when Backlund beat the Hitman for the belt, although the ending to the match was filled with shenanigans.

The title match was submission-only, meaning it could only end if one of the competitors quit or if the corner men – Owen Hart for Backlund and British Bulldog for the Hitman – threw in the towel, a nod to Backlund losing the title to the Iron Shiek, when Arnold Skaaland threw in the towel for Backlund. While chasing Owen around the ring, Bulldog knocked himself out tripping on the ring steps, which meant there was no one to throw in the towel when Bret refused to give up while in the clutches of Backlund’s chicken wing crossface. So, Owen begged papa Stu and mother Helen to do it, which Helen did.

The ending of this match really drops the quality down, as Hart was in the crossface for close to 10 minutes, while the Hart family drama played itself out at ringside. Heck, the WWE Network’s match labels for the ending puts a pin in this match about 7 or 8 minutes before the bell rings to end it! Plus, from a logistical standpoint, Owen, who was pleading for his parents to end the match for the safety of his brother, had JUST interfered in the match to stop Bret from putting Backlund in a Sharpshooter. Instead of telling Owen to go in there and stop it himself, Helen just tosses in the towel while Stu stands there disgusted. Cut a few minutes from the ending and it probably gets higher up in the rankings, maybe even to match of the night.

The WWF really used to know what they were doing with their opening matches at the Survivor Series. A whole bunch of them are populated near the top of the list, and the opener for 1994 joins them this time around. The match is the main turning point in the relationship between Diesel and Shawn Michaels, an event that’s been teased since SummerSlam, when Michaels first hit Big Daddy Cool with an accidental superkick and cost him the Intercontinental Title. It happens again here and it costs the team – who was on its way to a clean sweep – the match, as everyone got counted out trying to keep Diesel from killing Michaels. As a result, Ramon gets a sole survivor win. As he fled the building, Michaels vacated the tag team titles he held with Diesel, but the big came made out OK, winning the WWF Title from Bob Backlund at a Madison Square Garden house show three days later.

It’s a match with Jerry Lawler, Doink and a bunch of midget clones. You may think that Lawler’s team’s win was a coronation over the court jester, but… 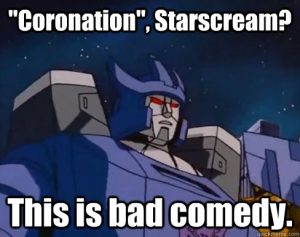 The Rest Is The Rest: Not a whole lot else to talk about this time around. Chuck Norris was the special referee in the main event casket match between Undertaker and Yokozuna, and kind of stopped a repeat of the Royal Rumble, where 10 guys beat the Undertaker down to help Yokozuna win. There was still interference, but at least we got to see the Texas Ranger hit Jeff Jarrett with a superkick.

And in the final elimination match of the night, Ted DiBiase’s Million Dollar Team – Bam Bam Bigelow, King Kong Bundy, Tatanka and the Heavenly Bodies – got another win over Lex Luger when Bundy hit Luger with a big splash. Bundy and Bigelow survive and Luger got shunted down the card to a tag team with the British Bulldog. Nothing terrible but nothing spectacular.

Overall, a fun card with some good matches.

Three eliminations seems to be a popular spot these days

There are 18 men tied with 2 eliminations each and 36 men who all have one elimination.