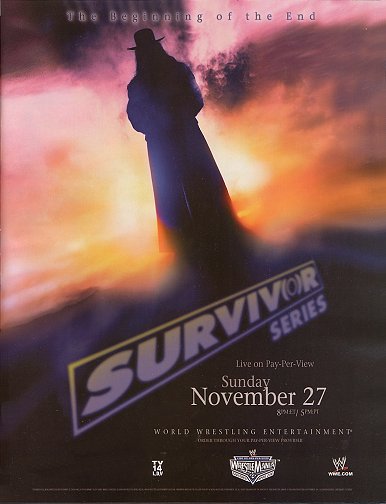 The Battles for Brand Supremacy take center stage this year!

The main event this year was built up over the course of two months, leading to a SmackDown vs. Raw traditional 5-on-5 elimination match, and once again, the Blue Brand comes off looking better than the WWE’s flagship show for… reasons, I guess. For the second time in three years, the main event elimination match came down to Shawn Michaels taking out two guys on his own before falling to Randy Orton through some chicanery. I’d chastise the WWE for running a repeat so quickly, but for two things: 1) Michaels pulls off the “underdog in peril” really well and 2) the ending of the match wasn’t the focal point of the ending of the show.

The fans in the arena knew what as up, though. As the match reset to just Orton and Michaels a loud “WE WANT TAKER” chant rang through the arena. And after the match, as SmackDown superstars crowded the ring to celebrate Orton’s win, the lights went out, the chanting started and a flaming casket appeared on stage revealing the Undertaker, who went straight for Orton to end the show. It’s an iconic Survivor Series moment, possibly spoiled by the poster up above, used to set up a future showdown between the two.

There’s a lot of sheer ridiculousness in this match, which is I think what made me enjoy it. Angle has his manager, Davairi, as the special guest referee, and Cena slapping him and Angle diving after him to prevent the DQ (because Angle wouldn’t win the title) set off a chain of events that saw every Raw referee get taken out in one way or another. Finally, SmackDown referee Charles Robinson had to come down to officiate the match. It probably could have been a lot better without the shenanigans, but I really enjoyed it. Although, the bleeping out of the fans chanting “YOU SUCK” in time with Angle’s music, by decree of Eric Bischoff, got really annoying really fast. The effect is really lost there when it’s not in the moment and almost not at all explained.

The two General Managers face off, mainly because Bischoff was a smug prick during the WWE Raw Homecoming show, when Raw moved back to the USA Network. It kicked off a pissing contest between the two brands that culminated at Survivor Series with the main event and this match. And this match was just a set-up for Bischoff to get his comeuppance as the Boogeyman attacked him. Which is really the only conceivable way Teddy should win… As far as storylines go, the match makes sense to have on the show, but watching it back 11 years later, it’s just a waste of time.

Cringeworthy: Clueless Vince McMahon alert. The boss came upon John Cena in the back before his match with Kurt Angle, leading to Mr. McMahon referring to the champ by using the n-word, leaving Cena – and pretty much everyone watching – a little stunned.

Crowded Commentary: All five commentators – Coach, Joey Styles and Jerry Lawler from Raw and Tazz and Michael Cole from SmackDown – were talking during the main event, causing the crack team to miss lots of little moments because they were all arguing with each other. Case in point, when Michaels pinned Bobby Lashley after a Kane chokeslam, Chris Masters kicked Lashley’s leg away from the ropes to keep him from getting out of the pin. It was a great little touch that Jim Ross or Jesse Ventura or even Bobby Heenan would have caught and highlighted, but the five stooges were too busy yelling over each other to even bother with it.

Piling On: More commentary lowlights, this time from the opener between Booker T and Chris Benoit. The two men kicked off their Best-of-Seven series for the US Title. Tazz tried bringing up the history, as Benoit and Booker did the same thing in WCW, for a shot at the WCW TV Title, but Cole kept running over Tazz’s history lesson, to extoll how this series was so much more important, because a title is on the line. It’s possible Cole was acting at the behest of Vince McMahon in the back, who didn’t care for the WCW link, but glossing over little bits like that is part of what makes modern commentary so obnoxious.

Women Crossing Brands: The first interpromotional match was between Women’s Champ Trish Stratus – seconded by Mickie James – and Melina – with Nitro and Mercury. The most noteworthy part of this was the opening chapter of the Mickie-Trish saga, which would culminate at WrestleMania 22. But there was also the build to the match, which saw Melina and her boys kidnap Trish to demand a title match, and I’m betting that’s where crazy Mickie got the idea for kidnapping Trish’s new pal Ashley to ensure Mickie got a Mania title show against Trish. Little bits of continuity are fun to speculate on.

The Crimson Mask: The somewhat pointless feud between Triple H and Ric Flair culminated here with a Last Man Standing match between the two, which was really just another excuse for Flair to bleed like a stuck pig and for Triple H to stand tall over his mentor. I never really understood the need for this feud, but at least it kept Triple H out of the title picture for a few months.

Another static Top Ten this time around.

Oh, there’s definite movement, even with just one elimination match! Shawn Michaels, JBL and Big Show climb their way up the Elimination Ladder!