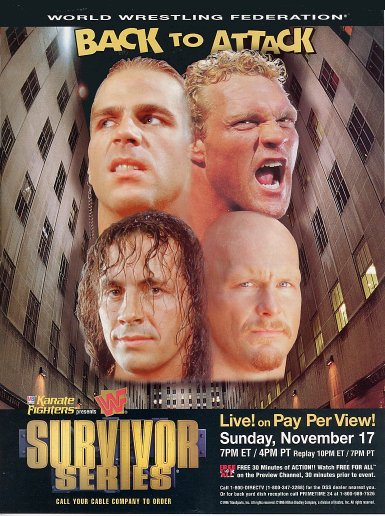 It’s the 10th annual Survivor Series, which means we’re about a third of the way through!

The Survivor Series finally makes its New York City debut after 10 years and New York City fans show their appreciation by… booing the living crap out of supposed babyface WWF Champion Shawn Michaels in his title defense against Sycho Sid.

Sid has tons of charisma and seems to be one of the few guys who can transcend the typical workrate guys who prefer five-star action to high-powered spots. So when the guy considered to be one of the best workers in all of wrestling in 1996 comes up against Sid, Madison Square Garden – a very smark-heavy environment – cheered for the big man. Sid hitting Michaels with a camera before pinning him to win the WWF Title was a moment very few people saw coming, considering how loudly the crowd erupted for it.

Steve Austin’s rise to the top of the WWF began right here. Bret Hart returned from a sabbatical after losing the WWF Title to Shawn Michaels at WrestleMania XII and said he wanted to work with the best worker in the company, singling out Austin. Austin, for his part, had been calling out Hart for a bit, as well, looking to prove himself. I was a big fan of Austin’s when he was in WCW and definitely disappointed when he was mired in stupid feuds with Savio Vega in the WWF. But if anyone doubted Austin’s ability, the match against Hart at Survivor Series should have quelled them. It wasn’t just Hart carrying Austin to a great match; it was two great wrestlers putting on a clinic for everyone, from the fans to the boys in the back. The match is a bona fide Survivor Series classic that helped to bridge the gap from the New Generation into the Attitude Era.

You have at least a couple of guys in this match who could have benefitted from a push with a win. Farooq was just starting the Nation of Domination. Vader was on a downswing after losing to Shawn Michaels at SummerSlam but could have been recouped. And Flash Funk, also known as 2 Cold Scorpio, was just starting and could have established himself with a win. But instead, we focus on the replacement versions of Diesel and Razor Ramon – which was dumb even by WWF standards – and the returning Snuka. The brawl leading to a draw just made the whole thing pointless.

An Electrifying Debut: So, how about this Rocky Maivia guy, huh? Jim Ross said during the show that the future Rock was a Blue Chipper with a big future in the business, but I don’t think ANYONE could have predicted how much of a pop culture phenomenon Dwayne Johnson managed to make himself. And it all started here, with his debut as part of Marc Mero’s team. Maivia overcame a 2-on-1 disadvantage to eliminate Crush and Goldust to become the sole survivor in the match and kick off an amazing career.

Only one new entry this time around, but it’s a doozy!

The top of the eliminations rankings are stagnant this time around, as a new generation of stars with a new attitude start to come up through the ranks.