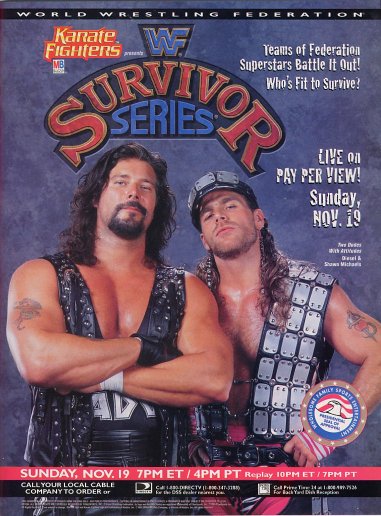 This year, WWF President Gorilla Monsoon throws a monkey wrench into the works with the first-ever Wild Card Match.

For the first time, the Survivor Series was held on a Sunday night, moving away from the Thanksgiving Night/Eve Tradition that had become its slogan. But that wasn’t the only change that happened this time around. One of the four elimination matches held during the event was a “Wild Card” match, where the heels and faces were mixed and thrown together “at random.” So babyfaces Shawn Michaels and Ahmed Johnson were teamed with heels Sid and the British Bulldog to face the “Bad Guy” Razor Ramon, ironically the only “good guy” on a team of heels – Owen Hart, Yokozuna and Dean Douglas. Manager Jim Cornette had men on both sides of the ring.

There was a lot of talent, a lot of charisma and a good chunk of fat in the match and the combination made for one of the more enjoyable Survivor Series elimination matches that we’ve seen thus far. The tensions between teammates Michaels and Sid and Dean Douglas and Ramon on the other side added to the drama of the match. Sid held Ramon up for Sweet Chin Music from Michaels and got kicked in the face when Ramon ducked, making for one of those iconic Survivor Series moments when Michaels shrugged and left the ring. Michaels, Johnson and Bulldog got the win after the Pearl River Powerhouse splashed and pinned Yokozuna. Definitely one of my favorite elimination matches of all time, and could have been the best match of the night if not for the main event.

Best Match: Bret “Hitman” Hart defeated Diesel (c) – No Disqualification WWF Title Match. And this is one of my favorite matches of all time, with champion Diesel coming in to the Survivor Series holding the belt for close to one year. Hart, on the other hand, was looking for his third WWF Title Reign. Hart and Diesel beat the hell out of each other for almost 25 minutes and gave the wrestling world the “Spanish Announce Table” spot, when Diesel bumped Hart off the ring apron and the challenger crashed through the ringside table for the Spanish announce team, Carlos Cabrera and Hugo Savinovich. When Diesel got Hart back in the ring for the Jacknife power bomb, Hart gold bricked and caused Diesel to bend over. The “Excellence of Execution” trapped Diesel in a small package for the win in a fantastic contest.

Also of note during the match, the subtle negative commentary about Hart from Vince McMahon begins, setting the stage for the last two years of Hart’s tenure in the WWF.

Worst Match: Goldust defeated Bam Bam Bigelow. I was a big fan of “The Natural” Dustin Rhodes in WCW and thought he had a lot of potential as a white meat babyface, and i thought it was a shame when he was fired from the organization after the terrible program with the former Repo Man, The Blacktop Bully. When he debuted in the WWF as Goldust, he completely changed his wrestling style to more of a stalling heel… and he just wasn’t very good at it. A good chunk of Dustin’s tenure as Goldust was terrible, and his second Pay-Per-View event in the gold makeup was completely worthless.

Most Disappointing: The four-on-four women’s elimination match probably could have stolen the show, given the talent involved, but the WWF decided to give the women just about 10 minutes and have the match build to a confrontation between WWF Women’s Champion Alundra Blayze and her next scheduled challenger, Aja Kong. Despite some great action from Sakie Hasegawa and Lioness Asuka, the reality of the match was Kong steamrolling over Blayze’s team on the way to a win. Kong had all four eliminations for her side while Blayze got three  on her own. No one else seemed to get close to a real near fall. It was a stark contrast from 1987, when the women nearly stole the show.

Presidential Address: Throughout the night, Vince McMahon referred to Landover, Maryland, where the USAir Arena is located, as “Suburban Washington, DC,” all for the opportunity to have a Bill Clinton impersonator in the audience, with a series of increasingly dumb segments. First, he confused Bam Bam Bigelow with Barney Rubble’s son, Bam Bam on the Flintstones and was covered by Secret Service when Bigelow’s pyro hit. Then, he was chastised by Mr. Bob Backlund for the government shutdown. And in the final segment, the allegedly horn-dogged President had Sunny on his lap, offering her a cabinet position. “I’d make a great Undersecretary,” she joked. I mean, I can’t say I blame the guy, Sunny was amazing in that dress she was wearing… Oh to be the popcorn dropped down her dress… I think she may have looked better in her evening wear than she did in her Bodydonna spandex outfit from earlier in the evening.

For the first time since the 1988 edition, we have a NEW NUMBER ONE!

2 – Powers of Pain, The British Bulldogs, The Rockers, The Hart Foundation and The Young Stallions defeated Demolition, The Conquistadors, The Brain Busters, The Bolsheviks and the Fabulous Rougeau Brothers. (1988)

A little bit more movement here, but that top three isn’t really in any danger yet.