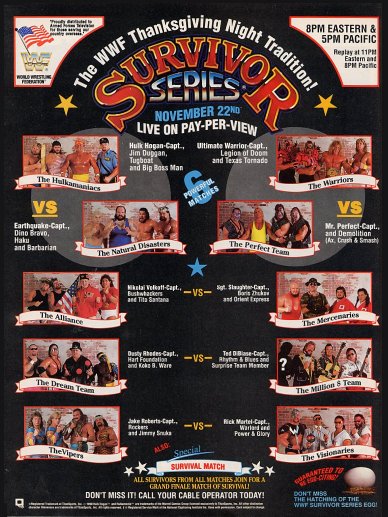 This edition features the debut of The Undertaker, The Gobbledy Gooker and the Grand Finale Match of Survival!

The World Wrestling Federation continues to tinker with the Survivor Series format in its fourth outing, introducing the Grand Finale Match of Survival, where the winners of each match are included in one more elimination match at the end of the night. As a kid, I thought this was an amazing idea, and honestly, I think it’s a shame the WWF/WWE never went back to the concept.

In 1990, with Ultimate Warrior as the WWF Champion and Hulk Hogan as still the clear top guy, it made sense that the show would close out with the two of them victorious. Not only were they both the sole survivors in their respective matches, but they also overcame being outnumbered in the main event (after Tito Santana pinned The Warlord first thing and then was eliminated himself). You would think this would be the next chapter in the Hogan-Warrior story that would lead to a WWF Title rematch, but that never happened.

Overall, it was another mediocre show, though more eventful than the previous year, thanks to the debut of one man… and no, I’m not talking about the damn egg.

A 25-year career begins right here, as DiBiase introduced the former “Mean” Mark Callous to the WWF, now garbed in a long black duster and hat. The Undertaker definitely made an impression right from the start, nailing Koko B. Ware with a Tombstone piledriver – a brilliant move for a guy named The Undertaker – and then eliminating Dusty Rhodes,

In a second-straight year of a low-quality Survivor Series, this match was definitely a highlight, considering the talent in the ring alongside the Undertaker’s debut spectacle. With the Grand Finale Match of Survival on the card, though, there was no way they could give Undertaker the win he deserved, since they weren’t going to put him in the ring with Hogan and Warrior on pay-per-view right away.

The weirdest jobbers-to-the-stars squash match ever, as Slaughters team gets wiped out quickly and then Slaughter wipes out the other side before getting himself disqualified and giving Tito Santana the win, which gave the babyface side a third team member. I don’t think anyone came out of this match looking all that great, so of course, Slaughter ends up with the WWF Title at the next pay-per-view.

A Second Squash: “The Model” Rick Martel’s team, comprised of Hercules, Paul Roma and the Warlord are the first team to accomplish a clean sweep at the Survivor Series, with the whole team coming through as survivors. The team managed to take out Jimmy “Superfly” Snuka and the Rockers easily before having team captain Jake “The Snake” Roberts chase Martel outside the ring for the countout win. I don’t think anyone had very high expectations for this match (even though the Rockers and Power & Glory could probably provide some high spots), so using it to stack the odds in the main event was a good call.

A Team of Warriors: I love that the Ultimate Warrior’s team in the opening match, called The Warriors, consisted of four guys who are or were called “Warrior” – The Legion of Doom were the Road Warriors in the NWA and “Texas Tornado” Kerry Von Erich was the “Modern Day Warrior” down in Texas (where Ultimate Warrior was called “Dingo Warrior).

Macho Problems: One of the top heels in the promotion – former WWF Champ “Macho Man” Randy Savage was nowhere to be found if you looked at the Survivor Series card. Transitioning from his feud with Dusty Rhodes (which Savage won at SummerSlam) to his new role as top heel, challenging The Ultimate Warrior for the WWF Title, Savage really didn’t have a place on the card. So all we got was an interview segment where he states his intentions. I guess it’s better than nothing.

Vince Lays An Egg: I wish I knew what the WWF was thinking when they A) started to promote a giant egg hatching as a featured attraction for the Survivor Series and B) decided on the contents of the egg being a guy in a turkey suit. Announcer “Mean” Gene Okerlund tries to sell it with a dosey-do in the ring while color commentator “Rowdy” Roddy Piper tries his best to exclaim how the kids were loving it, while the crowd just looks bored and confused.  This year’s Survivor Series had the shortest average match time – with 6 matches on the card – and the WWE Network broadcast of the show comes in at under two and a half hours, but a good chunk of time was devoted to Hector Guerrero dancing in the ring.

Despite being a sub-par show, we get two new matches in the Top Ten this time around. It helps that we’re still only in the fourth year.

As the eliminations begin to pile up, I’ll move to a more traditional ranking system.