When “The Powers That Be” approached me to do this year’s Survivor Series Preview, I gave them a dumbfounded look and said, “haven’t you been reading my Raw Recaps, I’ve been previewing this for weeks now!?” Then they blew smoke up my butt and waxed some heavy nostalgia by telling me how this was my first-ever PPV purchase so many years ago and it would be a tremendous feather in your swank Patriots cap to give this event the preview it so richly deserves. So here I am. The Thanksgiving Week Tradition. And while I still wish it was 1989 and all the matches we’re about to examine were the traditional elimination tag bouts from yesteryear, this show does have serious potential to once again stand tall as a member of WWE’s “Big 4.” Let’s just forget that last year’s debacle in Beantown ever happened where most of the fans there (me included) were too busy checking the New England/Denver score while booing the main event out of the building!

So sit back, wipe that sardine stuffing off your face and let’s head down to ringside!

Gold & Stardust (C) vs. The Usos vs. The Miz & Damien Mizdow vs. Los Matadores 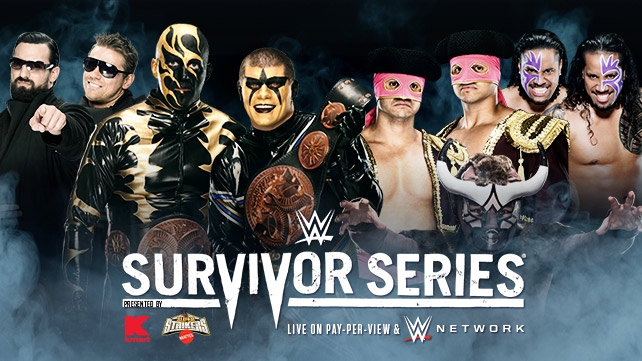 This match is the very definition of the term “pick ’em” as it really could go in any direction. All these teams have traded wins with one another over the past few weeks with none of them really standing out from the rest of the pack. The Dust Brothers have held onto the gold since capturing the belts at Night of Champions. Like most title holders not named Lesnar, they have won some and lost some. They have been pawns or cannon fodder to the main event players but when push has come to shove, they still manage to hold onto the hardware. How they managed to lose to the Matadors weeks ago, I’ll never know. Meanwhile, the hottest team in this group as far as the fans go could be the Hollywood A-listers simply because of the presence of everyone’s favorite stunt double, Damien Mizdow. If nothing else, he’ll bring the comedy up a notch and the fans will be geeked to see what he does next. The Usos are always fun to watch and are the standard bearers of the division. They were the top dogs for most of the year and in my opinion, haven’t missed a beat in the ring without their precious titles. I could see any one of these teams winning based on the recent 50/50 booking we’ve noticed on the red and blue programs, but for my money I think I’ll stick with Dusty’s kids and wait and see which face team emerges during the holiday season. Dan’s Pick: GOLD & STARDUST 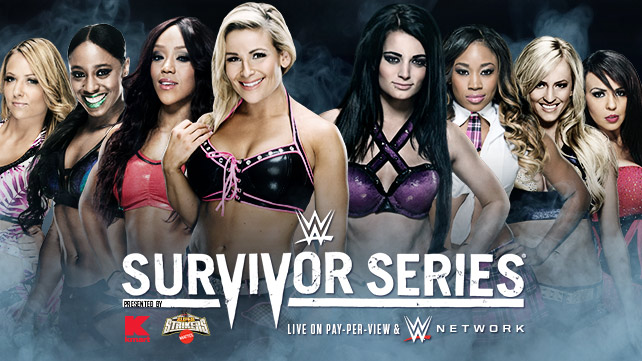 If you ask me, this match serves two purposes. First of all, old school nerds like me get thrown a bone as we are treated to a traditional 4-on-4 elimination tag where the main objective is to survive and outlast the opposition. In case you hadn’t heard, that’s why they call this the Survivor Series. Sadly, that fact has been lost on the company for ages now. Secondly, they need to give these ladies something to do, so why not go at it here in the STL? If you really break this down, Alicia and Paige were BFFs. Paige proved to be a tad too unstable even by Fox’s microscopic standards and they had a falling out. They traded wins with each other recently so this could serve as their rubber match. Naomi and Cameron have always been at odds from their break up on Total Divas and their certainly is no love lost between the veterans Natalya and Layla. Anyone else remember how wretched LayCool used to be to the Divas locker room? Summer Rae and Emma were not terribly close at NXT and Natalya once tried to abandon Summer on the side of the road. Needless to say, you don’t have to look far and wide to find the hate in this match. This probably will be a fun cool down between the more serious matches on the card and that usually means the faces will come out on top. Dan’s Pick: NATALYA & NAOMI 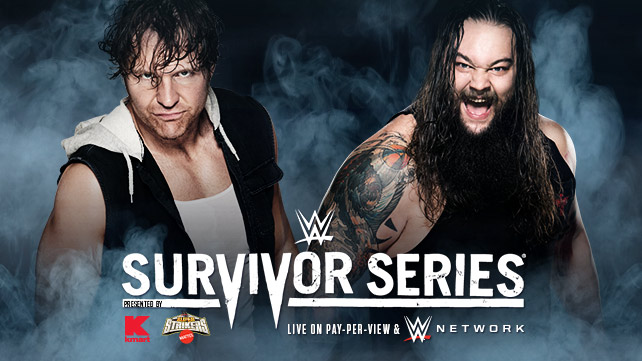 Who really knows what’s going to happen here? Unlike another naked picture of Kim Kardashian, this could legitimately break the internet depending on the outcome. Many feel The Lunatic Fringe needs a showcase victory on pay-per-view to establish himself as a true main event player. Others will argue that he is hot enough even without all the wins and others before him (Stone Cold anyone?) lost plenty and still became huge stars. The same arguments can be made for the “Eater of Worlds.” Has anyone been more up and down in the past year than Bray Wyatt? This is like a great playoff matchup taking place during Wild Card Weekend. Sure both teams were terrific in the regular season, but sadly, one of them has to go down in the books as a first round loser come the playoffs. Same thing here! These guys will tear the house down. They were awesome when they were in their respective factions and now they get all this time to tell a story in a singles match. Bray wants to save and heal the unstable Ambrose. Dean just wants to beat the hell out of somebody and Wyatt’s number is up. I’ll probably just sit back and enjoy this masterpiece from bell to bell but if I must make a pick, I think I’ll go with Ambrose simply because he is long overdue and WWE needs more strong faces not named Cena. Dan’s Pick: DEAN AMBROSE

If you do read my recaps, you know I have no love for the Bellas. Yes, I wouldn’t kick either one of them out of bed for eating crackers, but I just don’t want to see them on my TV in a wrestling ring. That being said, I do see the improvement in Nikki and I’m not just talking about her ahem… assets. She has a devastating finisher, an attitude that will make you want to punch a wall and her treatment of her sister, Brie, is downright deplorable. Now if I did my math is right, Brie is still under her twin’s control throughout the weekend based on the 30-day stipulation from Hell in a Cell. Any thought of her turning on Nikki seems out the window, but you never really know. I think AJ retains just the same. She has way too much in her arsenal to be knocked off by a Bella though I also foresee some Bella miscommunication aiding her to victory. Dan’s Pick: AJ LEE 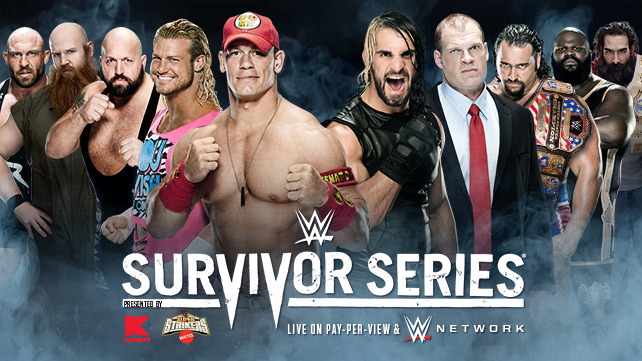 Let’s start with the stipulations. If The Authority and their newly-found loyal associates lose this match, Hunter and Stephanie are no longer in power. However, it has also been revealed that if Team Cena loses, all the men that stood up against the machine, except Cena, will then be fired from WWE. If they were smart, I could see a scenario where Cena’s club loses and then each guy has to do some of the most ridiculous stunts imaginable just to earn their respective jobs back. For example, Dolph can only get his job back if he promises to wrestle in his Spirit Squad gear again. Erick Rowan must clean toilets since he already wears a janitor’s uniform everywhere he goes. Perhaps Ryback can do the J.O.B. for the next year… oh wait… he did that already! But seriously, they could be very creative in how they could bring those “fired” individuals back into the company.

The more likely scenario is for Hunter and the crew to take a step back. It has been cool seeing guys elevated up the card like Rusev and Harper, but they have proven before that they can be successful without the help of The Authority. Mark Henry is a monster of a man and a tremendous foil for the likes of Big Show and Ryback. Heck, I think Rollins is ready to go off on his own and he’ll likely have Randy Orton ready to pounce on him once that happens. One the other side of the coin, Cena has big plans up ahead with a showdown with Lesnar so he needs to be prepped for that. Ryback’s sudden ascension could also lead to a future shot at The Beast and possibly a dark horse pick to win the Rumble in January. Rowan’s presence is intriguing as well. Do they tease a feud with his “brother” Harper here? Does he immediately get thrown into an Intercontinental Title program with his former running mate? Perhaps he’ll help Dolph get the strap back at some point. The possibilities are endless. I also wonder how they’ll beat Rusev while keeping him strong. A DQ seems logical or maybe the old fashioned “double countout with the guy he’ll feud with next” scenario. Do they pull the trigger on the Cena angle now?

The thought of picking this match makes my head spin. I do not see the faces getting fired so The Authority, to me, is out of luck. A pick of Rollins to win it all does tempt me, but I also suspect a Viper sighting in his hometown to spoil Hunter’s victory party. So with that said, you have to go with the hottest guys in the company and as much as the haters won’t like it, I see the return of Super Cena this Sunday. Although, so I don’t get hate mail, let’s add Ryback to the mix and say he’ll eliminate at least two members of the opposition. Dan’s Pick: CENA & RYBACK

So there you have it! Be sure to follow us at Place to Be Nation for the very best coverage of the Thanksgiving Week Tradition. In addition to the PPV live blog, stay tuned for the PTB Network Reaction Show and other tremendous Survivor Series themed articles and podcasts!