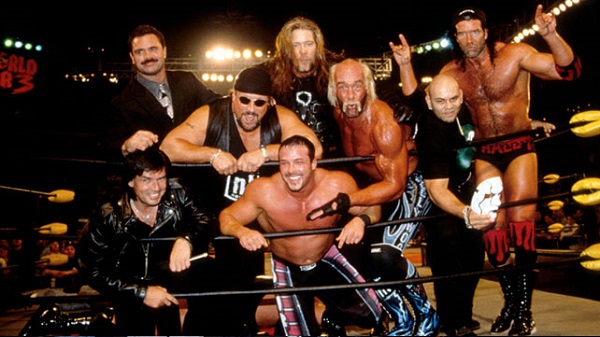 Ready or not, Survey Says is here at long last to tackle the topic that inspired our namesake. That’s right, it’s the New Worl–New Worl–New World Order! And to do it, we welcome returning guest and Expert Impersonationalist Greg Phillips as our third man. This extensive survey of the New World Organization of professional wrestling (brother) shall encompass the following:
*Scott Hall’s debut cutting short the storied career of The Mauler
*Kevin Nash’s forced pseudo-intellectual jerkass wit
*Alternate (and SOMEWHAT UNIQUE) Third Man options for Bash at the Beach 1996
*The tumultuous moral axis of Paul Wight
*A different take on the MegaPowers Explosion via Ms. Elizabeth’s perspective
*Heel Eric Bischoff as the embodiment of ’80s AND ’90s sleaze
*Winners and losers of the 1997 nWo membership drive
*The nWo as a template for subsequent biker enthusiast faction Aces & Eights
*Attempted vehicular homicide, or just another day in the life for the Steiners
*Eric Bischoff vs. James J. Dillon: The Administrative Powers Explode!
*The unsung character work of Heel Referee Nick Patrick
*The questionable decision to break up Hall & Nash in the nWo split
*Awkward nWo Hollywood non-member/biggest fan Bret Hart
*Possible missed opportunities of the brief Scott Steiner leadership
*The ultimately pointless nWo Elite
*Deja vu with the Black & Silver
*The nWo’s role in kickstarting the ’90s wrestling boom
Plus, we unearth an astonishing gem from the WCW media archives! Join the three-man power trip for this jam-packed edition singing the praises of the most dominant and iconic faction in the history of sports entertainment. Survey Says: one more for the good guys!

Two-time (two-time!) guest Greg Phillips is one half of the Hard Traveling Fanboys, which can be found each and every week on Place to Be Nation POP. Some might call it the longest-running weekly episodic comic book podcast in allllllll of Place To Be Nation, but that’s not for me to say.