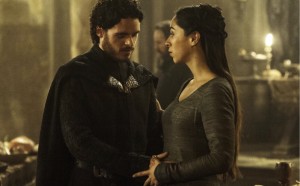 Close your eyes and picture your favorite TV show. You set your DVR for it, but you always watch it live suffering through the commercials. And you are sitting down now, watching said favorite show and all of a sudden…BAM. They kill off your favorite character! How could they do that!!??

This season, many fans of Game of Thrones felt the same way with the Red Wedding episode. But then again, this isn’t the first time that GoT has surprised their fans, now is it? We’re rounding up a few of the most surprising deaths on television over the years.

Nate Fisher – Six Feet Under, 2005: Before Parenthood, Peter Krause played the eldest of the Fisher siblings and inherited half of the family funeral business with his brother David. During the last season, Nate has a brain hemorrhage triggered from a previous treatment and after the doctors tell him he will have a healthy recovery, he passes away while his brother is sleeping by his side. I remember watching the episode and thinking about what an awful way to go that is. The series ended summing up the entire family’s demise.

Dan Connor – Roseanne, 1997: In the Series Finale, Roseanne revealed that the show was actually based on her writing about their life, but she made a few changes to make the Connors’ life seem happier.  ]They didn’t win the lottery. Jackie was a lesbian and most notably, Dan suffered a heart attack at Darlene and David’s wedding and did not survive.

Maude Flanders – The Simpsons, 2000: Of course Homer had something to do with it. The Fan-demonium girls shot a shirt cannon at Homer, but he bent over to pick something up and Maude was hit instead. After her death, Ned opened up “Praiseland” in Maude’s Honor and the residents of Springfield started attributing the statue of Maude to religious experiences that they were having. Unfortunately, those experiences were due to a natural gas leak near the statue. 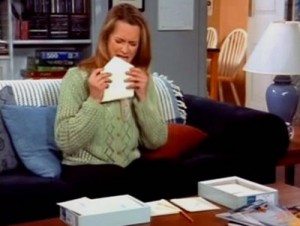 Susan Ross – Seinfeld, 1996: George finally finds a woman who not only loves him, but will marry him…only for her to die shortly before the wedding. George being George bought the cheapest envelopes possible, and Susan died from licking the toxic glue on the invitations. It was pretty shocking to have Susan meet such an ending and on a sitcom, and in the end, George being George, tried to ask Marissa Tomei out. (Editor’s Note: George Steinbrenner was set to play himself in the episode, but after he read the script and saw that Susan was set to meet her demise, he politely declined the offer – Justin)

The entire cast of Lost – 2010: There were so many notable deaths in the final season of Lost, from Sun and Jin, to Locke and Sayid. But after spending six seasons watching this show on the edge of our seats – we were rewarded with the fact that the final season was really a sort of “limbo” that the entire cast was in and they were all in fact, dead. I can’t say it was surprising, given the direction the plot had gone over the years, but it was upsetting to know that they were all dead, even Hurley.

Rita Morgan and Maria LaGuerta – Dexter, 2009 and 2012: After Dexter finally caught and killed the Trinity Killer it turns out he got to the person Dexter actually loved the most, and first. Rita’s death was not only surprising, but incredibly disturbing. After getting a message that Rita has returned home, Dexter found her body in the bathtub and their son Harrison crying in a pool of Rita’s blood just like Dexter had been found by Harry, all those years ago. The final scene still gives me nightmares. Last season, the death of LaGuerta was equally surprising. Dexter’s sister Deb found herself having to choose between her brother and doing the right thing, and she chose her brother. LaGuerta’s death hasn’t been easy on Deb, but it sure helped Dexter out.

Ned and Robb Stark – Game of Thrones, 2011 and 2013: If you read all of the A Song of Ice and Fire novels, then neither of these deaths were surprising. But if you haven’t, you must find yourself wondering why they keep killing off all of these characters that you love. In the first season of Game of Thrones, the patriarch of the Stark Family decides to do the right thing and protect his family and is rewarded by being beheaded by the evil Joffrey. This season, the Freys set up Robb Stark with the wedding to end all weddings in the Red Wedding because he married a woman he loved and not one of his many daughters. Although we won’t spoil it for you, as a reader of the novels I can assure you that George R.R. Martin has many more deaths in store for us.

All of these deaths were shocking, but would we all watch Game of Thrones each week, sitting on the edge of our seats if everyone lived happily ever after? Probably not.