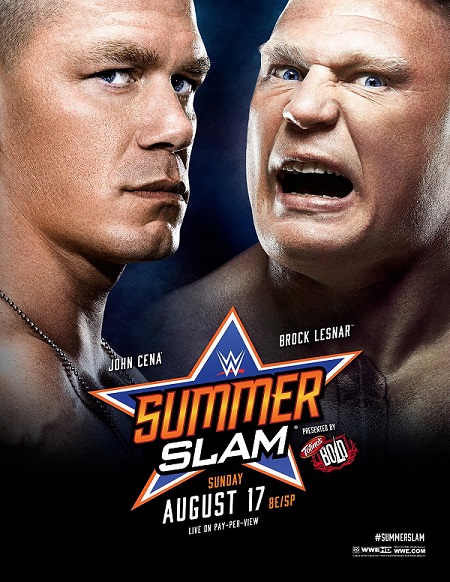 The biggest event of the summer! I have been the biggest SummerSlam fan for my entire wrestling life. It was the first PPV I ever bought with my own money and my friends and I rotated each other’s houses and I had the SummerSlam house. There have been some great SummerSlams (1989, 1997-2002) and there have been some stinkers (2003, 2010) but over the past few years SummerSlam has been about 50/50. We’ve had some snoozers in the mid-card but we’ve had some great main events to balance it out. Sadly the guy who’s brought the most to SummerSlam the past few years isn’t here and that’s CM Punk. He’s fought John Cena in 2011, Cena and Big Show in a Triple Threat in 2012, and then the epic war with Brock Lesnar last year. Lesnar is back this year with a bigger prize at stake. We have a pretty stacked card with a lot of young, hungry talent. So let’s dive right in and get started with our projections.

This feud has been fantastic since Seth “bought in” and officially ended The Shield. Rollins is smug and arrogant as Triple H’s corporate stud, while Ambrose has channeled his inner Roddy Piper from 1989-1992 and done everything possible to drive Rollins bonkers whenever he tries to cash the briefcase in. One of my favorite moments in this feud was on Raw a couple weeks ago when, while Rollins was in a match, Ambrose casually walked to the table, opened the briefcase and ripped up the contract. Rollins lost it and in fact lost his match to Heath Slater. Ambrose’s in ring work has been spotty but that’s mostly because he’s usually in peril. This match will be fun although the logic of a lumberjack match makes no sense considering Ambrose is at his best when the match is all over the arena. This obviously means The Authority has its hand in it. I like the upset pick and the “chosen one” wins. SCOTT’S PICK: Seth Rollins

The Miz, attempting to channel his inner 2003 Rock (and badly I might add) takes on the guy everybody wanted to see win at Battleground in the IC Battle Royal. Ziggler has been in the dumps since last year’s failed World Title run because of the concussion. It seems like he’s getting some of his shine back from the fans as he gets consistent pops when he comes out for his matches. I think it is a great gimmick that Miz is a movie star from movies nobody cares about. That’s an even better gimmick than Rock 2003. He was a legit movie star and an incredible character. Miz is trying and he’s a better heel being a poser of a movie star. Of course WWE won’t tell you that but frankly we’re not really caring what they say right now about much creatively. Sadly, Miz will keep the title in a decent match because they have no faith in Dolph and that is piss poor. SCOTT’S PICK: The Miz

This is the sleeper match of the night. I’ve been critical of Orton since the fall of 2013 because he seems played out and his off-camera behavior sometimes leaves a lot to be desired. However he does bring the juice to the ring every time and since losing the straps at WrestleMania, I feel he’s upped his game even more. Watching Battleground in the PTB Man Cave, I was goofing about the last time I cared about Orton, but subconsciously I’ve enjoyed him more than I admit. Reigns is a beast but I think he still has a long way to go before being considered a legit #1 contender for the World Title. If the plan right now is for Reigns to be in the main event at WrestleMania 31, that’s a bad idea. He’s definitely not ready yet. He’s got some good highlight power moves and strikes but he still has to enhance his overall work. He needs to get better at bridging big moves like the Superman Punch and that apron kick that’s pretty swank. This (other than the main event) will be the longest match of the night and Orton will do the right thing and put Reigns over. SCOTT’S PICK: Roman Reigns

I’m probably in the very small minority who thinks Paige has been really good since coming up to the main roster and has in essence been ignored because the creative team right now has the attention span of a 10-year old (and has been cut due to budget constraints). She does her best in the ring and her submission finisher is great, but her heel work has been decent against the over AJ. Is AJ back to whet the whistle of Punk returning? Who the hell knows. In any event this match will be just as good as their match at Battleground and AJ will retain again. SCOTT’S PICK: AJ

I am so sick of this feud. Hopefully when this show is over, Rusev gets elevated to something with a little more meat. Why is Jack Swagger, a lukewarm heel to begin with who has injured not one but two superstars due to his Ahmed Johnson-esque sloppiness, getting such a push? The crowds couldn’t care less. Rusev needs to beat him down and move on. SCOTT’S PICK: Rusev

With the build and TV time that this match has had, you’d think it was the main event of the show. It ended back to back Raws, and if it wasn’t for Hulk Hogan’s birthday it may have ended this past week’s episode too. This feud is bred from the Authority/Daniel Bryan storyline. Daniel Bryan fans should take solace that at least their guy hasn’t been forgotten and that he’s still being mentioned often on TV. Stephanie mannerisms (except for when her creepy fake boobs were stretching out when she was arrested) have been great in this feud, and are covering for the fact that when she was an annoying heel Brie was fine, but as a serious babyface she’s bringing nothing to the table. Triple H as referee means lots of cheating and interference. Daniel Bryan can get over on Triple H, but Brie Bella getting over on Stephanie? NOT HAPPENING. Whether Brie’s sister Nikki turns heel or not is irrelevant. SCOTT’S PICK: Stephanie McMahon

After the improbable win at Battleground, it’s pretty clear that Bray will get the win back here. No Harper or Rowan at ringside I think is exactly what Wyatt needs right now. After the Cena feud died a painful death, I think this is a chance for Wyatt to stand out again as a force in this company. Many liked him as a favorite at the Money in the Bank match to win the title, but then suffered another perplexing loss at Battleground to Chris Jericho, who doesn’t have that shine that he used to. Bray Wyatt has come a long way from that trainwreck match against Kane at last year’s Summerslam. This will be the first time there won’t be interference to wreck the flow or the buzz. This could end up just like the Royal Rumble match with Daniel Bryan, which means a shocking MOTY candidate. With Jericho you won’t get a piece of crap, although the Battleground match was definitely below his standards. Bray gets the win here, because he has to. SCOTT’S PICK: Bray Wyatt

If you listened to the current episode of PTBN’S Main Event you know my opinion of Brock Lesnar. I won’t repeat that here. The build to this show (mostly in absentia by the two wrestlers) has been as good as it can be. Some think that Brock Lesnar can be Champion and not be on every PPV. That’s partially true, but the roster needs to be beefed up to afford PPVs that won’t have a main title match. The match will be pretty epic. I’ve gained a lot of respect for Cena over the past year. I’ve accepted the fact his promo skills are pretty standard and his merchandise is dreadfully ugly but he is the quintessential company guy and he (for the second year in a row) will be a transitional champion because it’s what is best for the company. Brock Lesnar is indeed a mercenary (in kayfabe and real life) but if he is indeed going to hold the titles until next April in San Francisco, might as well start it here. This match will be great, not as great as their Extreme Rules 2012 match, but still pretty good. SCOTT’S PICK: Brock Lesnar

There’s my picks and projections. Be here Sunday night at Place to Be Nation for the Summerslam Live Blog with a cast of characters. Also be sure to check out our SummerSlam Rewind series and the special episode of the Brad & Chad Show where the boys rank every SummerSlam. Enjoy the show!