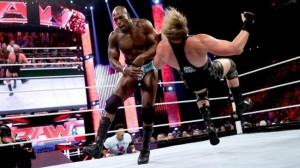 We start this week’s show with a recap of Curtis Axel and Paul Heyman’s vicious beat down of CM Punk last Monday on Raw. And with that, Curtis Axel is making his way down to the ring…

What’s this? A very dapper looking Alex Riley has joined Main Event as the color commentator!

Cody is fresh off a great match two weeks ago against Alberto del Rio. Paul Heyman is clutching onto the Intercontinental Title as if it was Punk’s old WWE title.  By doing so, it makes the IC belt seem more important. Back and forth wrestling to start, leading to a Rhodes’ fireman’s carry takedown. As in previous episodes, the first segment is used by the announcers to talk about Raw, here; they talk about the brutal Punk/Heyman feud. Axel thrown to the outside, back in, and Rhodes hits the Booker T./Jerry Lynn sunset flip out of the corner for two. I really enjoy Cody Rhodes as a face, much more than as a heel. Axel takes over with some punches and kicks. Matthews and Riley have an interesting dynamic going on; it almost feels like regular sports commentary.

After the break, the announcers start paying attention the match. Axel belts Rhodes off the top rope. Riley and Matthews note that Rhodes respects Axel and he paid homage to Axel’s father by bringing back the white IC belt. Rhodes comes back with an axehandle from the second rope. Axel has improved by leaps and bounds since joining with Paul Heyman, but this still pales in comparison to the match with del Rio. Clothesline to the back of Rhodes’ head. Good discussion between Riley and Matthews over whether Axel is using Heyman or vice versa. Not used to this kind of intelligent banter on a wrestling program! Rhodes returns with his moonsault press, followed up by his brother’s drop down punch and a kick to the lower abdominal. Alabama slam by Rhodes after Axel misses a Perfect Plex. Suplex by Axel, musclebuster by Cody! Curtis desperately hangs onto the apron as Paul panics, but he breaks free, kicking Cody in the head. He follows that up with a modified neckbreaker for the victory in fifteen minutes.

In the second most welcome move of the evening, we are spared from hearing Zeb’s rantings. Riley says that O’Neil or Young have what it takes to become WWE or World Champion. I don’t even know how to respond to that. Double-team moves by the PTP to start, until Cesaro impressively throws Young over the top, where he’s met by a Swagger clothesline.

There’s already a clear difference between Riley and Matthews and the other announce teams. Matthews asks a question, opening up Riley to bring intelligent commentary. As an example, here Riley is comparing his own gym strength to the functional strength of Swagger and Cesaro. In the ring, after a Swagger Bomb, Cesaro leap frogs over Swagger, landing in a double stomp on Young. Deadlift suplex by Cesaro, belly-to-belly by Swags! DY is bleeding from the mouth. Young is over to make the tag, and everything’s breaking down now. The ring clears, and O’Neil grabs Swagger and drops him with a Sky-High for the pin in 5:30. The finish came out of nowhere, and the Real American’s losing streak continues.

Good time to plug my piece on one-half of the Prime Time Players, Darren Young, from a couple weeks ago

We come back to a Raw Recap, reviewing Daniel Bryan’s streak of bad luck against HHH, The Shield and Randy Orton.

The second consecutive matchup where there’s no clear-cut favorite.  Kofi Kingston is completely nonplussed by Fandango’s lavish entrance. Kofi starts off with some wristlocks, trying to get a quick pin. Matthews and Riley question whether there will be any long-term effects to Kingston’s elbow injury. What refreshing, intelligent commentary.  Kofi flips out of a Fandango monkey-flip, then hits one of his own.  Fandango to the outside and he jumps over a baseball slide. Kofi recovers to hit a springboard body press to the floor. He gets thrown into the post by Fandango as we take a break.

Fandango hits a spinning heel kick and works on Kofi’s recovered left arm as this competitive matchup continues.  I’ve noticed that Fandango has scaled back on his in-ring histrionics. Drop kick and boom drop by Kofi, and Summer Rae grabs his ankle. The match is continuing, but the referee calls for the bell and a delayed disqualification. Odd finish, I’m not sure if the wrestlers expected the match to end here. During the replay, we can see the referee pause for a few seconds before ringing the bell. Maybe they called an audible due to time constraints.

Hoping that these two have a rematch in the future, possibly on a PPV. Overall, a much improved show over last week, with a solid opener and, really, all three matches could have gone either way. The announcing was well above average, and, given more experience, Riley could become an exceptional color commentator.