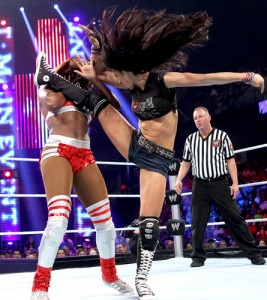 Match #1: The Shield vs. The Usos and Kofi Kingston

Three weeks in a row for the Usos on Main Event. This is Kofi’s return to the program after his injury, and Josh Matthews refers him as an “all-purpose player.” Is that similar to saying “he’s a good hand?”

Kofi and the Usos take control for the first part of the match. Strangely, for over five minutes, the announcers completely ignore the six participants. After briefly discussing Dean Ambrose and RVD’s pre-show SummerSlam opener, they move on to the mood of the locker room due to the events of Summerslam and Raw. Miz badmouths HHH’s leadership, and I wonder if there will be retribution for him down the line.

The Shield takes over on Jimmy Uso, and I laugh as Miz desperately tries to compare himself to Daniel Bryan, stating that no one took him seriously in the beginning of his tenure. Meanwhile, in the ring, the Usos and Kingston press slam Seth Rollins over the top rope onto the other Shield members. All three faces soar over the top rope simultaneously with planchas, with Kingston adding a somersault!

We return from break as Kingston hammers away on Ambrose with punches in the corner. The Usos try a hip attack followed by a top rope splash, but they are distracted by Reigns and Rollins. Ambrose comes back with a dropkick, Reigns with a flying shoulder block as the pace is really picking up. Seth Rollins tags in, slowing it down so the Shield can work over Jimmy Uso in the corner. Jey enters to clear the ring so Jimmy can reach over for the hot tag to Kofi. Springboard crossbody, dropkicks and clotheslines a-go-go, boom drop for Ambrose, misses the Trouble in Paradise but hits the SOS for a two count. One of the Usos takes out Reigns, who had broken up the cover, and now it’s just chaos. Seth Rollins throws the illegal Uso into the ring, which distracts the referee, allowing Rollins to throw Kofi off of the top rope, into Ambrose, who hits his finisher for the victory in about 14 minutes.

Although it was a slow start to the match, the last five to seven minutes was solid. I really wish Miz and Matthews would have focused more on the match or at least catered their comments towards the Shield’s role on Raw. Oddly, that comes later in the upcoming women’s match.

The Funkadactyls dance in the ring as Layla comically looks on in disgust. Naomi starts by hand-springing out of a wristlock. In a cool spot, she kicks AJ into the splits and then follows up with a sliding kick to the noggin. Miz and Josh refer to Naomi as the most athletic female on the roster. She shimmies out of a go-behind by Lee, flips over the top rope but misses a springboard badly. The commentary devolves into a conversation about Twitter followers and, BY GOD, Naomi just used the butt-butt. Iceman King Parsons and Colt Cabana would be proud. Cameron and Layla skirmish on the outside, and the distraction allows AJ to slap on her Black Widow submission hold for the win. That was a quick four minute match for the divas which will likely lead to a tag-team battle in the future.

Match #3: Jack Swagger (with Zeb Colter and Antonio Cesaro) vs. Great Khali (with Natalya and Hornswoggle)

Colter babbles about customer service calls and outsourcing jobs. A couple months ago, the WWE was trying to get Zeb on with Glenn Beck. Today, he’s using the line, “If I were the king of outsourcing, I’d outsource YOU.” Khali bops Cesaro on the head to clear the ring and starts his offense by chopping and elbowing the All-American. Swagger escapes, snaps Khali’s neck on the top rope, and obtains control. Vader bomb follows, and Swagger starts working on Khali’s knee. I haven’t seen Khali wrestle in a couple of years and didn’t realize how badly his gait has deteriorated. Hornswoggle tries to interfere, and Cesaro and Swagger trap him outside the ring. Natalya slaps Cesaro, Swagger throws Hornswoggle into the barrier, and everyone chases after Simon Diamond, the Musketeer and the Prodigette. Swagger rolls back into the ring and gets bopped in the head for a Khali victory.

The facgime’s (trademark, Team ECK) mistreatment of Daniel Bryan is the focus of our Raw Recap this evening. Instead of watching Raw, I went straight to Scott Criscuolo’s review to read his excellent, yet HHH-centric, report.

As we come back from the highlights, Miz and Josh Matthews’ analysis is interrupted by Fandango and Summer Rae in a repeat of Summerslam.

Match #4: Bray Wyatt (with the Wyatt Family) vs. Justin Gabriel

This match stems from last month’s attack on Gabriel and Heath Slater by the Wyatt Family here. Wyatt attacks with headbutts, as Miz describes the faction’s demeanor in the locker room as “eerie, odd and lethal.” Gabriel with a couple of kicks, but that’s all he gets. I wish Wyatt, who proclaims himself the “leader of worlds” during the match, would enunciate when he talks. I can’t make out most of his banter here.  An avalanche, a quick dance with Gabriel, and Wyatt plants him for the win in only two minutes.  After his last two performances, it’s clear that Justin Gabriel is now delegated to the role of South African Barry O.

By far, the worst of the three Main Events I’ve reviewed. With the exception of a couple sequences in the opening match, this was a rather tepid episode.