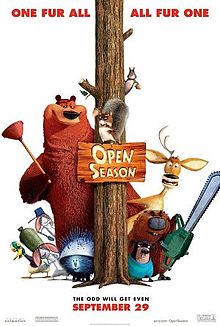 So now with the summer coming to an end and the fall beginning, it will become clear that the box office will begin to decrease until we head into the holidays. After having at least more than one film during the summer months be declared a winner, this month we only have one and this will become a constant theme for the month of September going forward. Most of the films will pretty much finish on par with what is expected from them which is why the only winner for the month of September 2006 is Jackass: Number Two. Being released four years after the first Jackass movie and with the TV show still somewhat fresh, the film was pretty much more of the same and it delivered in spades with a strong showing. In a month that had every film either on par or below par with expectations, Jackass 2 proved a strong commodity and deserved its title as the winner of the month.

As mentioned, most of the films released in the month of September were pretty much on par with the expectations given to them. A few did end up finishing below their budgets, but for the most part did just enough to avoid becoming bombs. However, there were two films in particular that did not do well at all and ended up becoming the losers of the month. The first month that is given the title of loser is the thriller film the Black Dahlia, based on the highly publicized murder of actress Elizabeth Short. Despite having a solid performance by actress Mia Kirshner, the film received mixed to negative reviews and was unfavorably compared to the film L.A. Confidential. It also ended up being released along the same time as fellow thriller Hollywoodland and because of this, the film finished by making only half of its budget and ended up becoming a flop. The other film from the month of September that deserves a spot in this category is the war film Flyboys, based on the true story of Americans fighting for the French Air Force in World War I. Unfortunately, the film ended up receiving mixed to negative reviews partially due to its lack of historical accuracy and it would bomb big time, to the point that it was deemed one of the 10 biggest flops of the year. It’s never a good thing for a film to end up as a flop, but it is even worse when it ended up being one of the worst flops of the years and it clearly deserves it spot as one of the losers of the month of September 2006.

The Surprise/Story of September 2006: No film breaks out of the pack in September

When coming up with which movie I feel was the overachiever of the month, I usually like to think there are multiple candidates per month and that the decision should be at least somewhat of a challenge, even if I go with more than one winner. However when it came to this month, there was really no contest here as the clear overachiever of the month is also the sole winner of the month and that’s Jackass: Number Two. Building on the goodwill from the first one that came out four years ago, the Jackass crew provided pretty much the same amount of crazy stunts that proved to still be very popular with the public. In a month that saw a bunch of films either end on par with expectations or fall below expectations, Jackass was a breath of fresh air in the dankness that was September 2006.

Looking at this month, it seems like there would be a few contenders for this category as opposed to the previous one as I had just mentioned that most of the films released either met or fell below expectations. However, there again was really just one clear winner for the underachiever of September 2006 and that film is the animated film Open Season, a film where woodland animals fight back against human hunters. On paper, the film did fairly decent as it finished with just over $85 million which just met its budget while also finishing at the top of the list for the month. But as we saw throughout the summer, the only animated film that did well was Cars while several other films (Monster House, the Ant Bully, etc.) failed to break out and it seemed like Open Season was in prime position to break out especially in a weak month. However, it wouldn’t be until a few years later when animated films can have a great run in September and combined with poor reviews, Open Season was the latest animated film to fall flat on its face and was clearly the underachiever of September 2006.

September 2006 Awards Watch: The Wicker Man, the Black Dahlia, the Last King of Scotland, and Hollywoodland

Unlike the previous month which only had one film released that garnered any award nominations, that list does go up here as four films released this month enter the awards race. While I did mention that the summer was typically when awards season starts, it is around here and October that the majority of the big players come out and have their runs towards next year. The first film on the list that gets the nod is the Wicker Man, the remake of the classic 1973 horror film though this version was severely panned by critics and fans. To this point, it would end up being nominated for five Golden Raspberry Awards (Worst Picture, Worst Actor, Worst Screen Couple, Worst Remake or Rip-Off, and Worst Screenplay) though it would not win any awards. The second film from this month on the list is one of the losers of the month, the Black Dahlia which did somehow earn one Academy Award nod (Best Cinematography) though it would not win the award. The next film on the list is the Last King of Scotland, a drama about a Scottish doctor who becomes the personal doctor of President Idi Amin and would win one Academy Award (Best Actor) and it would also win one Golden Globe Award (Best Actor). The final film from the month of September to make it on the list is the thriller Hollywoodland, a fictional dramatization of the murder of actor George Reeves in the similar vein of the Black Dahlia. While it would not get an Academy Award nod like the Black Dahlia did, it would receive a Golden Globe nomination (Best Supporting Actor) which it wouldn’t win.

Overall, it is pretty clear that the year of 2006 has taken a pretty big dip coming off of a pretty interesting summer. As mentioned, September is historically not always the best month as it is coming off the summer and just before the next major rush which occurs during the holidays so this month pretty much falls in line with Septembers of past. This month was pretty much down the middle as only one film did very well while the rest of the films released ended up either on par or below expectations. So far, 2006 has been a pretty interesting year as the summer was pretty hot with some good films, but as mentioned the momentum was blunted pretty badly here with this month. We will see if the box office can swing back up in October and get the momentum back before the holidays start, but as for this month it is a pretty below average month though it is not the worst month of the year.