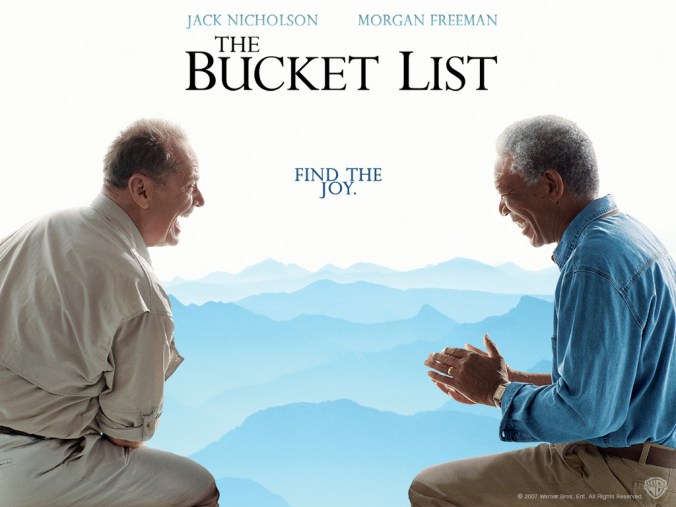 Top 10 Films for the Month of January:

So we are now into a brand new year and as I mentioned at the end of 2007, the slate of films that were set to be released in 2008 all looked to stand out and help propel 2008 past what 2007 was able to do. Already, 2008 is off to a better start than 2007 was as January 2008 had a few films that looked to potentially break out and have a good run. The first film from this month that makes it into this category is actually a film that was released in 2007 on a limited basis and that is the Bucket List, a comedy about two men who take a road trip to complete their “bucket lists” before their deaths. Coming out in a time that saw a solid number of big budget films dominate the end of 2007 and beginning of 2008, it was good counter-programming that did very well and nearly reached the magical $100 million mark despite mixed reviews. The next film released this month is the first big film released this year and that is the found footage horror film Cloverfield, a film that sees a group of friends try to escape Manhattan in the midst of an attack by a mysterious monster. With plenty of hype behind the film, it was sink or swim for director J.J. Abrams and it managed to swim as it would set a record for Martin Luther King weekend while also beginning a very unique universe that we won’t see come through for a number of years. The third film released this month that makes it into this category is the romantic comedy film 27 Dresses, a film about a woman who has been a bridesmaid for 27 weddings try to find love herself. Coming out on the same weekend as Cloverfield, the film would prove to be perfect counter-programming to the monster film and despite the mixed reviews it received, it still made a good chunk of money and almost surpassed Cloverfield on the top 10 list. The fourth and final film from this month that makes it into this category is another film that was released on a limited basis in December and that is Atonement, a romantic war drama film about a crime and its consequences that take place over the next six decades. The film would be positively reviewed by critics and despite a bit of a slow start on the limited circuit, it would go on to have a pretty decent run on the wide circuit by finishing with just over $50 million which made it one of the more successful films of this award season. So just by looking at the winners of the month themselves, there is no question that January 2008 was by far a much more successful month than January 2007 and 2008 is at least off to a decent start.

January Losers: In the Name of the King: A Dungeon Siege Tale

Now unlike last year where we had only one winner and multiple losers for January 2007, we have already flipped the script this year as we do manage to have multiple winners for this month. At the same time, we only have one legit loser of the month as the rest of the films released this month mostly met their expectations or did underperform slightly, but not enough so to be included in this category. As such, the only film released this month that ends up being a loser of the month is the video game adaptation In the Name of the King, based on the Dungeon Siege games where a man must save his family and the king from an invader. It was widely considered one of the worst video game adaptations in history though the bar is pretty low to begin with, and it was also considered one of the worst films of the decade let alone the year of 2008. Stumbling right out of the gate in its opening weekend, the film would only last in theaters for a whopping 14 days and became one of, if not the biggest bombs of the year and it will be interesting to see where it ranks amongst the other losers of the year.

As 2007 ended and 2008 began, there was an interesting feeling in that some of the films released this month had some potential to break out amongst the holdovers from December and the awards contenders. Obviously at the top of the list was Cloverfield which had plenty of hype behind it due to the secrecy of the plot and being filmed in the found footage style which hadn’t been seen a lot since the Blair Witch Project. At the end of the month while Cloverfield did have a good run and made some good money, it ultimately did not win the month as that honor went to the Bucket List. With its fun premise and having two legendary actors as its stars, the film provided solid counter-programming for the big budget holiday holdovers along with those films being released wide for the upcoming award season. Thanks to this unexpected success and the good run that Cloverfield had, January 2008 was far better than what January 2007 was which had one decent film (Stomp the Yard) yet nothing else to prop it up and now 2008 is off to a solid start.

So going into January 2008, there wasn’t much of a question as to which film was probably going to have the most eyes on it and that was Cloverfield, and many wondered if it would live up to the hype or end up being nothing but hype. There was much speculation behind this film after the first teaser appeared out of nowhere and left many scratching their heads wondering what this was, and as more info about it came out now it was about if the film would end up doing well. In the end while it did not finish first for the month and fell to second behind the Bucket List (which was also in contention to be in this category), Cloverfield did manage to live up to the hype and made plenty of money against its pretty small budget. As a result, it was pretty clear going in that this was going to be the overachiever of the month and it is well deserved for this unique film that would potentially begin a new franchise.

This is an interesting category as there appeared to be a few films released this month that could be in consideration for this category, particularly some of the award contenders that went wide and were expected to do well only to fall a bit flat. But looking at some of the films a bit deeper, most of them ended up meeting their expectations and others like In the Name of the King had low expectations to begin with and ended up being a bomb. But there was one film that I think many had some promise and that was the action film Rambo, set 20 years after Rambo III which sees John Rambo try to protect Christian missionaries from a military regime. Coming off the unexpected success of Rocky Balboa back in 2006, there was a belief that the same success would come for another one of Sylvester Stallone’s memorable characters that had gotten older though could still be a badass. Unfortunately even though the film would open at number one in its opening weekend, it wasn’t able to maintain its momentum partially due to the mixed reviews and this franchise was officially buried after a planned sequel/reboot was scrapped in 2016. It would also spell a down period for Stallone as he would begin a run of underwhelming performances until having a brief resurgence with his more successful franchise with Rocky, but we will get to that one way down the line.

January 2008 Awards Watch: Atonement, There Will Be Blood, Meet the Spartans, The Kite Runner, and In the Name of the King: A Dungeon Siege Tale

Overall, the first month of 2008 ended up being much better than what January 2007 was though it still wasn’t a complete success as it didn’t completely capitalize on how 2007 was able end. We saw last year that 2007 did not get off to the best start as nothing was able to break out aside from one film and now flash forward to one year later, and 2008 was already ahead of 2007 with a few films doing well. While we did not see any film reach $100 million this month though one did come pretty close, we did have three films that made more than the number one film of January 2007 did by a pretty good margin while the rest of this month’s films did somewhat better than the film from last January. As I mentioned back in the 2007 recap, that year was pretty much a roller coaster year that had plenty of highs and lows with the year managing to end on a pretty high note. As we now start to really get into 2008 and head into February, we will see if the year can try and build up on this month that had set a decent bar thanks to a few of the films released. As for the month of January 2008, it was a much better month than what January 2007 was though the month as a standalone was still a pretty subpar month.