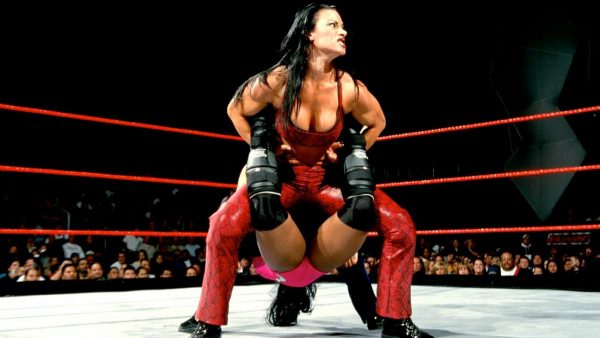 OK, it’s getting awfully gay in here already so let’s rewind. We have a LOT to get through before we even get to that point.

Victoria had one of the deepest and richest careers of any Diva, working up and down the card and on both sides of the fence in a variety of roles. She was also one of the best wrestlers of any Diva, and by my count racked up more good matches along the way than any other woman of the era.

First of all, I think it’s neat that when Victoria signed with WWE they put a clause in her contract stating that she was legally obligated to have at least one (1) great match with Trish Stratus every year that they were both on the roster. I mean I can only imagine it was stipulated in her contact because no matter what they were doing in any given year, they’d always find each other and have a great match.

Of course that all started when Victoria debuted in 2002 and launched right at Trish, in a feud that broke barriers for the kinds of violence the women could get up to in WWE.

They had a wild old romp on the September 30th Raw that ended in Victoria nailing Trish with what I believe was the first ever woman on woman chairshot in WWE history. This lead to two big gimmick matches for the Women’s Title: Hardcore Rules at Survivor Series and a Chicago Street Fight on Raw in January 2003. Both are awesome plunder matches that are chock full of weapon shots and nasty brawling. They were not missing each other with these shots, let me tell you.

And even outside of the gimmicks, the nasty brawling remained; this feud was basically one big, long brawl, occasionally broken up by a ring bell or, I would hope, sleeping and eating. For months Victoria and Trish just lived to punch each other in the face.

Or, as Victoria put it, “I want to take Trish’s SOUL!” 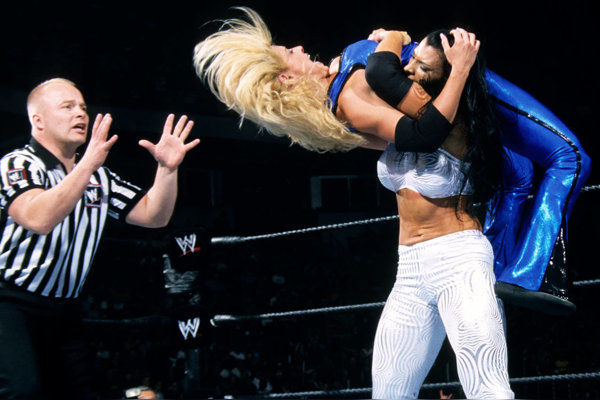 Victoria wasn’t just stiff and nasty, she was also quite insane. I think that’s what people remember about her from back then right? Crazy Victoria. She had the creepy entrance with TaTu and the eyeballs and the twitching, she had the creepy boyfriend following her around, and she said inexplicable things like “I want to take Trish’s SOUL!” (I’m sorry, it’s such a ridiculous line and I can’t stop thinking about it.)

She has this two week feud with Stacy Keibler after winning the Women’s Title that kind of captures her in a nutshell, because in the space of two weeks Victoria beats her up, threatens to murder her and licks her face, beats her up some more, BITES THE FINGERNAILS OFF HER FINGERS, and debuts the Widow’s Peak and kills her dead. Crazy Victoria was… a LOT.

In all seriousness she really was a lot though; Victoria had to play a lot of different roles and get a lot of things done in her time in the company. Once she turned babyface in early 2004 the main thing she was getting done was wrestling, pure and simple. Victoria wasn’t as suited for the babyface role as a character, but she made up for it by working super hard in the ring and consistently delivering, having good matches with pretty much everyone in her sight.

She matched up surprisingly well with Lita in a fun babyface match at Backlash 2004. She had good matches with Trish with the roles reversed. I was sold on the idea of her against Jazz after the triple threat at Wrestlemania XIX, and a year later they finally had some matches and I was not disappointed. Victoria was working out of her skin with anyone she faced.

It’s a shame that the hair match at WrestleMania XX was probably the worst match she ever had with Molly, because they pretty much always did good work together. In fact the things they did to each other were downright scary at times – Molly ripped Victoria’s hair clear out by the roots, Victoria slammed Molly’s head so hard it bounced like basketball. One time Victoria pulled Molly’s wig off to reveal her bald head and Molly just straight up took her down and choked her until she died.

Their match at Unforgiven 2004 was their best and has some great arm selling by Victoria. Her selling in general was great in this period, actually, and it was crucial to her ability to garner sympathy as a babyface even though she was bigger and stronger than all of her opponents. Her and Gail Kim, in particular, had a lot of good limb work matches.

Victoria also had a very pleasing babyface comeback that consisted of her punching fools in the face. Hard not to love a girl with a great right hand.

But after a productive run as a working babyface, soon enough Victoria was back to living her best life – being a heel and beating people up.

Her first run as a heel was all about Crazy Victoria, this one was more… Surly Victoria. She combined with Torrie Wilson and Candice Michelle to form Vince’s Devils to take on Trish and Co. for a fun few months, and Victoria naturally worked as the heavy for that team and carried the bulk of the in ring work. 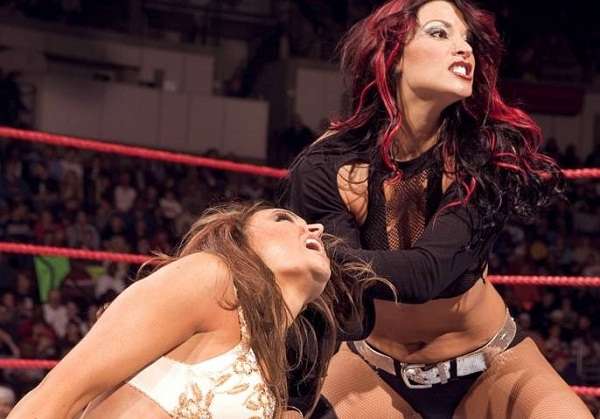 In fact, Victoria carried pretty much the entire heel side of the women’s roster in 2005-06. She really put a shift in during these years, doing everything from giving Christy Hemme a solid five minute PPV match, to working with Mickie James when she first came in, to hooking up with Trish again and inevitably having great matches. She had the ability to give new girls like Christy or Ashley everything they needed and make them look credible, and then turn on a dime and instantly look like a world beater against Trish or whoever the champion was.

She had one such moment in December 2006 when she had a fun mini push based on her ticking names off a checklist on her way to the Women’s Title. She won a battle royal that was basically an extended squash with her killing all the other girls, and then week by week she would just monster them one by one and tick them off, leading to a title shot against Mickie James.

Victoria was credible in any role they gave her – heel or face, goofy or serious, jobber or champion. She was a trooper.

My favorite little thing about this period was during Vince’s Devils when Victoria would look so exasperated at having to carry Candice Michelle while she was being silly, doing her dance and waving her magic wand around. Little did Surly Victoria know that she’d end up being the silliest of them all soon enough.

It was a move to Smackdown that did it. There are few things that got a wrestler in the 2000s going more than a move to Smackdown, and Victoria was no exception. And thus we enter phase three of Victoria’s heel career, the one that stole my heart: Goofy Victoria.

Goofy Victoria announced herself with a bang during the annual Divas Halloween Bullshit Dress Up Nonsense Battle Royal in 2007. Everyone else came out as a sexy this or a cute that. Victoria rolled out in a giant sumo costume, tumbling and bumbling like a boofhead.

And she just took off from there. The Smackdown women had a Diva Search-style competition in early 2008, and every week Victoria would find a way to be more and more ridiculous – stumbling through an obstacle course, hamming her way through arm wrestling (“Got a ticket to the gun show, Michelle?”) and wearing a snorkel and flippers to a water fight. It was about this time that I started to feel a strong desire to move to America and marry this woman.

They key is that she found a way to be this extra during her matches as well. It wasn’t just about dressing up and slipping in puddles, it was about booting a girl in the gut and yelling “GOOOOOOALLLLLL!” in celebration, or cutting someone off and gleefully saying “Not today!” before eating something else, or just shit talking and bragging her way through a match only to slip on a banana peel and get rolled up in the end and looking absolutely SHOCKED about it every time. The Bellas debuted doing their Twin Magic gimmick on Victoria, and she would try so hard to solve the mystery only to be foiled every single week, like the Wil E. Coyote of wrestling.

She was perfect. The comedic heel worker of all my dreams. 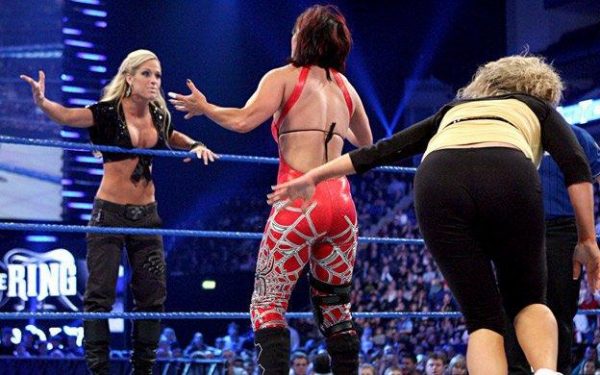 Victoria vs. Cherry is a match that legitimately changed my life as a wrestling fan. The easiest way to explain it is as kind of a women’s version of Razor Ramon vs 1-2-3 Kid. If you don’t remember her, Cherry was the sweet, rollerskating valet of Deuce and Domino, reluctantly participating in her first match. Victoria kicked her all around the schoolyard, talking trash and toying with her the entire time, only for Cherry to snag the win in a big upset.

This match is my happy place; four and a half minutes of the most blissful fun I have ever had with a video on the internet. I’ve probably watched this match a thousand times. It is a treat. A balm. A drug.

In less than five minutes so many aspects of my fandom were illuminated and solidified for me. My love of Victoria and her goofy heelish perfection. My love of goofy comedic heels in general, which only grew from this point on. My love of Cherry (more on her in the future). And most of all, my love of four minute Divas matches, and the infinite possibilities for entertainment they held.

I always appreciated the Divas, but by the end of 2008, for this and other reasons, I was hooked. And thus began an obssession that has somehow lead me to writing these pieces for you lovely people today. So I guess blame Victoria. Or thank her. Delete where applicable.

Glad to get that off my chest. Tune in next week for whatever I decide to write about next week, I don’t quite have an idea yet. Toss any suggestions my way if you have them.