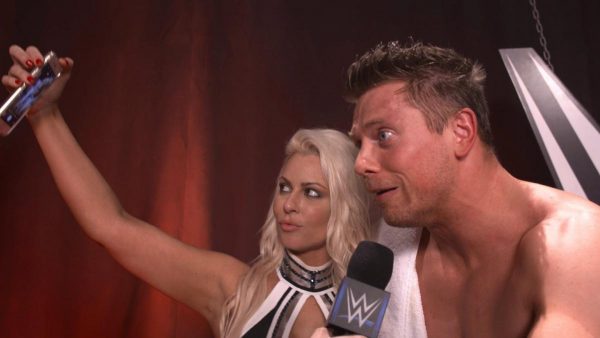 In amongst all the excitement of the Hell in a Cell PPV, one thing I was most excited about was the in-ring return of Maryse. Now Maryse the wrestler probably isn’t the first version of her that comes to mind, so I’m going to take a good hard look at her wrestling career and hopefully answer some good hard questions, such as:

(I saw so many Maryse matches I learned the words to her song by osmosis. What a BANGER. I’m fine with her continuing to wrestle forever if we keep getting to hear Pourquoi.)

But let’s get down to it. The main thing about Maryse is that she is just… such a Maryse.

My job as a writer should be pretty easy this week. Adjectives will be pretty superfluous. There is no other word that describes this woman as thoroughly as simply, Maryse.

She is such a Maryse. The Marysiest Maryse to have ever Marysed.

If you saw Hell in a Cell you’ll know what I mean, because even seven years post-retirement it was still all there: The swagger. The disdain. The Larry Z levels of stalling. The shit talking from the apron. The cackling. My God the cackling! And when Brie finally got close to her, the concerted effort to back – her – all – the – way – the – eff – up… so Maryse could do the hair flip. And celebrate. Maryse perfected the art of doing absolutely piss all and then celebrating the achievement wildly.

This is all classic Maryse. Vintage Maryse! She is a five star, gold label shithead of a heel. She lives to antagonise.

The great thing about Maryse is that she has always been this way, and clearly always will be. She even came to the main roster as basically a fully formed Maryse. She was one of the lucky Diva Searchers who spent quite a bit of time in developmental before debuting properly on TV – all we saw of her the first two years was that series of SmackDown skits of her lying in the bath speaking French and being, well, Maryse. 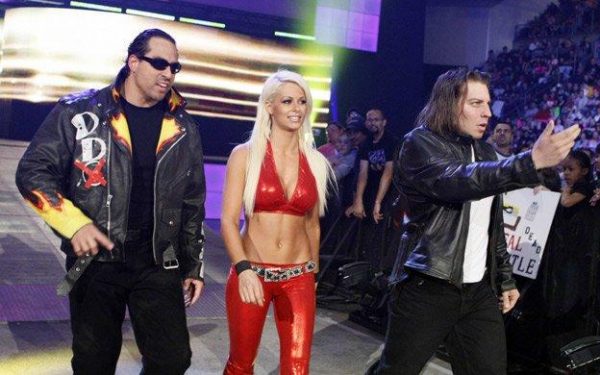 Her wrestling career began in 2008 with the advent of the SmackDown women’s division and the eventual creation of the Divas Title. Deuce and Domino had ditched sweet and innocent Cherry for the decidedly… not that Maryse, sparking a feud between them and leading to Maryse’s first matches.

Once again, the amazing thing about Maryse is just how quickly she got it when she started wrestling. Maryse fucking GETS IT. She gets how to be a heel, how to project her character, how to build heat, how to be… Maryse.

She also hits a lot harder than you’d think as well, busting out random stuff like cravats, passing the guard, stiff kicks and that banging camel clutch. When I wasn’t saying to myself, “My God she is SUCH a Maryse!” I was marvelling at how perfectly fine her matches were right from the very beginning.

In general Maryse is just AMAZING in 2008. Like, one time she honest to God shoot kicked Cherry in the face and BROKE HER NOSE, and the week after they have Cherry in the trainers room with her face caved in, and Maryse saunters in and goes, “Excuse me, can you take a look at my ankle? I think in hurt it last week… kicking Cherry’s face.” And she laughs and laughs, and I laugh and laugh.

Another time she interrupted Maria Kanellis backstage doing something and motherfucking euthanized her, cutting this epic promo about how her clothes are trash, her ass is fat and her breasts aren’t big enough. This was straight up murder. A crime scene was left backstage.

Also, can we just stop and talk for one hot second about how this woman came into the Diva Search in 2006 without a lick of English and five seconds into her career she’s out here dropping Hiroshima level promo bombs and obliterating people off the face of the earth?

WWE clearly saw what they had with her and by the end of 2008 after a decent handful of matches they strapped the rocket; she was showcased in the women’s Survivor Series match and in December she won the Divas Title off of my girl, the previously-impervious Michelle McCool. When she did I wasn’t even mad because by that point Maryse was literally the most watchable wrestler in the company.

Seriously, whenever she started a new program, literally all she had to do was be herself in the same room as someone and two minutes later, I was hooked and willing to pay all the money in the world to see them fight. It’s her magical power.

She moved to Raw and feuded with Mickie James, and did so by basically spraying hairspray in Mickie’s eyeballs whenever she felt like it and cackling about it. By the time they clash at Night of Champions 2009 I would have gone back in time and paid for that show A HUNDRED TIMES. For the record they delivered with what was probably Maryse’s best singles match.

It’s the same with everyone – she defends against Kelly Kelly and they spend their time locked in some SUPER aggressive grappling and trading hair flips. She comes back from injury in late 2009 to challenge Melina and decides to drop the greatest troll performance in the history of wrestling. AND the history of troll jobs.

I can’t even explain why or how this is, it was a random tag team match on Raw and literally all she does is stand on the apron and yell things like, “Hey! Melina!” for three minutes, but it’s probably the greatest three minutes a heel has ever commited to tape. Maryse is MESMERISING.

Melina’s own injury robbed me of the chance to hypothetically pay a million dollars for their title match, but the silver lining was the title tournament, and mini Maryse and Gail Kim feud that ensued when they made the final. At this point Maryse, for reasons unknown, made a complete about-face and suddenly started being super nice to Gail, putting her over and showing good sportsmanship. Now, Maryse isn’t EVER nice to ANYONE. That’s another Maryse-ism. She hates everyone. Even her own tag team partners. She hates all other humans indiscriminately for not being Maryse. 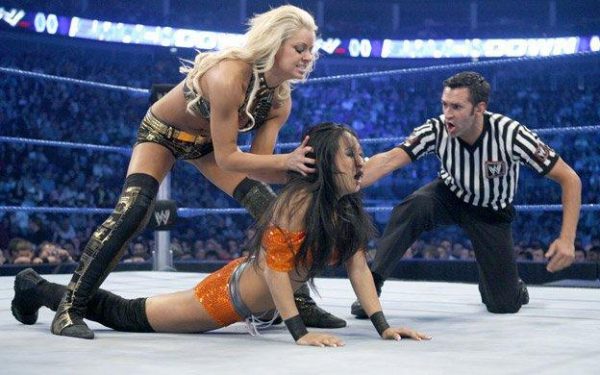 I’m sure you call smell what I’m cooking and sure enough, at the PPV Gail Kim reveals that SHE UNDERSTANDS FRENCH AND KNOWS MARYSE HAS BEEN TALKING SHIT ABOUT HER IN FRENCH THIS ENTIRE TIME! Shades of Daenerys on Game of Thrones when she revealed she could speak Valerian the whole time and iced the fuck out of that slave master with her dragon. In fact, since this angle came first, Daenerys was showing shades of Gail Kim. The Divas are back on their Golden Age of Television ish again!

I could watch Maryse do absolutely anything at this point. There’s a battle royal on Raw one day (5th April 2010) and Maryse on commentary does her best ‘Chris Jericho at Slamboree’ impression and just trashes all of the girls and their outfits as they come out, and it’s as glorious as it sounds. She’s usually pretty great on commentary actually, talking shit, giving zero fucks about anyone on earth, and constantly telling Cole to stop calling her Maurice. Commentary is a hard gig and she crushed it, and again, this is someone for whom English was out of reach only a few years beforehand. 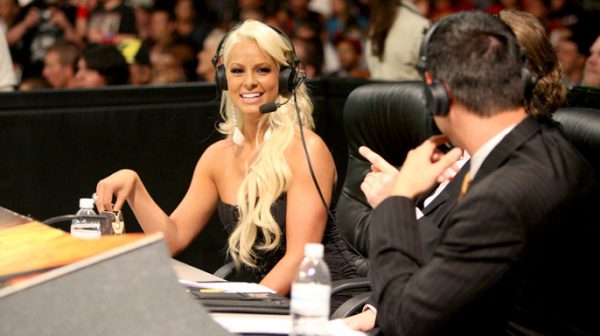 Frankly Maryse didn’t even need words anyway because she did so much with a simple laugh. Nobody in wrestling has ever laughed like Maryse laughed. She CACKLED. Constantly. About everything. Conveying everything from disdain, to superiority, to mild amusement, to wild unencumbered glee. There was a time when she rolled out of the way of Eve Torres’ moonsault, and just laid there on the mat laughing about it. Cackling about it. Honest to God ROFLing in the middle of a championship match.

If they weren’t doing Alexa vs. Trish at Evolution, they could have done Alexa Bliss vs. Maryse for the Most GIFable Wrestler Of All Time Championship.

Another random highlight I want to mention is the day the Bellas tried to use Twin Magic on her. Now that trope was already WAY past its use by date even in 2010, but literally everyone fell for it every time. Then Brie faced Maryse during that aforementioned title tournament and they tried to bust it out on her. Maryse just caught them red handed, CACKLED HER HEAD OFF, booted Nikki and pinned her. I. Was. DECEASED.  God bless this woman.

Coincidentally, it was immediately after this match that Miz met Maryse on the stage and THEY DID THE THING where Miz cut a promo right in her face, throwing in the French that he was learning in real life just for her, and Maryse was LITERALLY FUCKING THE SHIT OUT OF HIM RIGHT THERE ON LIVE TV WITH ONLY HER EYES. You know the one. Talk about a Live Sex Celebration. This was the raunchiest moment in wrestling history. I can’t believe it made it to air.

So of course, this company immediately paired Maryse up with Ted DiBiase Jr. instead.

The only redeeming thing about this was at Money in the Bank 2010 when Maryse almost became the first woman to win the briefcase, climbing the ladder for Ted in the middle of the match. Frankly she’d have been a much better world champion than Ted anyway. Well I mean, she WAS a much better world champion. She was a two-time champion, all of her title feuds were entertaining as hell, and until 2014 she was the longest reigning Divas Champion in its long, storied, five year history.

So yeah, I found a LOT to love about Maryse’s in ring career. She was infinitely watchable and I was never let down by having her in a match. During some dark times she was basically the only entertaining person on Raw. There are few things more fun than Maryse just Marysing it up.

So that’s that. It’s a busy time for the women at the mo, later today we have the long awaited return of Kaitlyn (check out my recent love letter to her if you haven’t already), and next week I’ll be back with audio recapping the entire first round of the Mae Young Classic, as well as dropping another Divas Deep Dive right in your lap. Oooh, oui.