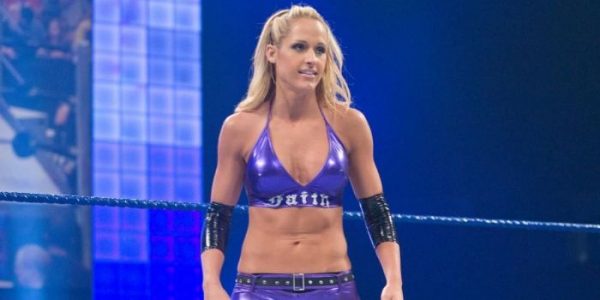 So far I have been talking about more recent discoveries of mine, but today I am going back to one of my very first and most long standing wrestling loves.

I have been enamoured with Michelle McCool since I first saw her all the way back on the 2004 Diva Search. Was it the Southern accent? The dominant Diva Dodgeball performance? Who knows. But I fell instantly, so it’s clear that there was never really any hope for me.

Lucky for me she turned into a bomb ass wrestler.

The strangest thing about this is that more people don’t seem to think that is the case. The Internet Wrestling Community, to invoke such a thing, was decidedly not enamoured with her at the time, which is weird because she was basically one of us. She was pretty much a lowkey indy workrate geek in WWE, years before being an indy workrate geek in WWE was cool.

I mean, if you like workrate for workrate’s sake (and people do claim to when they praise Cesaro or whoever to high heaven), then Michelle is your dude. She wasn’t much of a promo, she kind of came off like a beautiful blonde robot a lot of the time, but damn, that was a beautiful blonde robot that could wrestle. From when she started wrestling regularly in 2008 until she retired in 2011 I’d say she accumulated more good matches than any of the other women at the time. She was a machine.

In more ways than one. My absolute favourite thing about Michelle McCool is that she wrestles like The Terminator.

Michelle, on offense, is relentless. REE. LENT. LESS. As soon as the bell rang she would just swarm. She was always attacking, always moving forward, always smothering you with her offense. It was overwhelming. It’s a random connection to make, but it’s something that drew me to Stan Hansen when I first started watching his matches (and I think Stan Hansen is the second greatest wrestler I’ve ever seen) and it’s something I’m just realizing now that I see in Michelle as well. They both come at you like the God Dang Terminator.

A lot of the time Divas matches get tagged with being too choreographed. You can see the strings, see a certain level of co operation between them. Let me tell you, once she turned heel, Michelle McCool never looked like she was cooperating with anyone in the ring. Almost to the point where she looks UN-cooperative. There are times where the babyface she’s wrestling will try to get some space or hit a move and Michelle will just swat them away and keep beating them down, as if to say “No no, you gotta do better than that.” And it forces them to really wrestle control back from her, in the purest sense of the word. She makes a babyface EARN every single piece of offense they get. Again, just like Hansen did.

They are also tied for the best, most vicious knee drops of any wrestlers I’ve ever seen, so yes Michelle McCool is the female Stan Hansen. I WILL die on this hill, do not at me. (Actually please do at me, hit me up, I love feedback.)

A lot of Michelle’s offense was pretty tight actually. She’d take people’s heads off with that Big Boot of hers. Or knee people’s heads into oblivion up against the barricade wall. She bent Melina into all sorts of shapes. She straight up murdered Eve Torres on some random Smackdown. And she once gave Mickie James a Knee Trembler that was so sick it made Mickie’s head spin around like she was in the fucking Exorcist.

The thing that cracks me up about Michelle’s Hansenesqe style is that (just like Stan!) she’d use it no matter who she was wrestling. She’d boss around girls like Kelly Kelly or Eve Torres, sure. Maria Kanellis is whom Michelle had turned heel on in the first place in a never ending Triple H-style beatdown (somewhere, right now, today, Triple H is still beating up Ric Flair on Raw and Michelle is still beating up Maria on Smackdown), and for the next six months or so Maria was Michelle’s personal bitch, just getting pummeled by her every time. But Michelle would also work the same way with bigger and more experienced opponents too like Natalya or Beth Phoenix. She was the Terminator and anyone was fair game. Just try to stop her.

(With one exception, which is so absurd that I have to mention the fact that Tiffany, of all the people on earth, always had the jump on Michelle and would dominate her in a way that nobody else was able to. This is so absurd I brought it up to Taryn Terrell when I met her in New Orleans and she couldn’t even disagree. I have no explanation as to why this should be, but believe me, it be.) 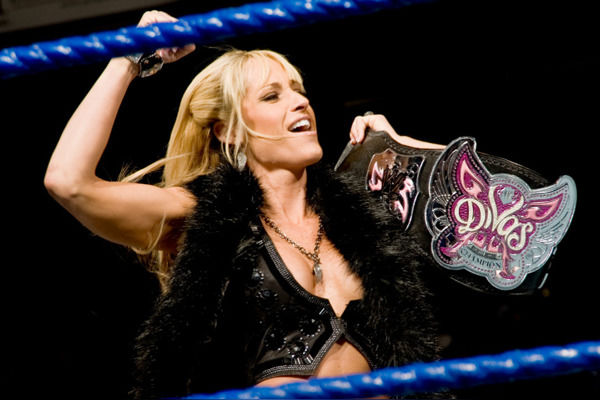 Anyway, this relentless style of offense lead her so beautifully in the direction of a little lady known as Melina. As I went into last week, Melina was the scariest person in the universe, and this held true even as a babyface in 2009 when she got traded to Smackdown. The first time they face off Michelle goes into her usual Beast Mode and starts beating the shit out of her – but Melina turns around and BEATS THE SHIT OUT OF HER RIGHT BACK. And Michelle freaks out and retreats, and that simple moment was SO HUGE to me because of how dominant she had been up until that point. If Michelle the God Dang Terminator is taking bumps in fear when Melina LOOKS at her funny, this shit is well and truly the fuck on.

When you talk about Michelle and Melina, you have to talk about the match they had at Night of Champions 2009. This match was too good. Literally, “too good”. That’s what Michelle and Melina were told by agents when they got to the back afterwards, that they can’t be wrestling like that because it looked too good, they were hitting each other too hard and they were showing up the boys. (THE DIVAS GOT IN ACTUAL TROUBLE IF THEY DARED TO HAVE GOOD MATCHES OR PUNCH EACH OTHER REALLY HARD. FUCK THIS COMPANY.)

The thing about that particular PPV match is that it’s basically a bomb-throwing indy spotfest style match squeezed into a six minute Divas match. I don’t know how more obvious it could be that Michelle McCool was a student of wrestling, but the evidence is abundant. Dudes, she used AJ Styles’ Styles Clash as a finisher when he was World Champion of TNA, their “competition”. Before that, it was Christopher Daniels’ Angels Wings, which she called the Wings of Love. She even used the heel hook as a finisher as well, and using a move as realistic and visually… small as that shows that she must have been a bit of an MMA geek as well. Michelle even regularly used Daniel Bryan’s signature heel refrain from the indies, telling referees, “I’ve got ’til five!” and popping me every time.

Michelle was never scared to bring in these outside elements and try new things (and remember that TNA and indy wrestling were treated VERY differently by WWE back then). And yet it’s not like you’d ever peg Michelle McCool as an indy wrestling aficionado, because she never worked indies and came in through the Diva Search. She was a Barbie doll, not a “real wrestler” and all that bullshit trash.

Perceptions are funny things, and I think in Michelle’s case perceptions of who she is have hurt her in a way that I don’t think is justified when you actually examine her work. She was a fucking wrestler. (And like, truly, if she really did supposedly have so much booking power because she was dating the Undertaker, you’d think she’d be able to book herself in a match that went longer than 90 seconds every once in a while. But I digress.) 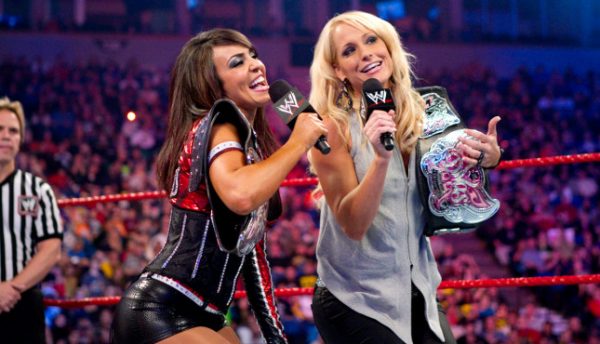 I’ve been speaking mainly of her singles run as a heel, but I’d be remiss if I didn’t mention that on one beautiful day in the lives of Michelle, Layla and myself, they put Michelle and Layla together as a tag team. And then kept them there. Be still my beating heart.

I really think Michelle McCool needed Layla. Here she was, the wrestling robot, having good matches but not doing a lot outside of the ring. Enter Layla, the wrestling goofball, and suddenly the magic starts happening. Layla brought all her stooging and bumping and goofiness to the act, and not only that but she brought those things out of Michelle as well. As the God Dang Terminator she rarely looked vulnerable or showed too much ass, but as part of Laycool she was bumping and stooging around with the best of them. She also developed this great expression of pure fear, where she would look up under the ropes into the ring at Beth Phoenix or whoever in abject terror, knowing her goose was cooked, which was a level of vulnerability she was never able to show before.

Laycool Michelle was a more well rounded Michelle, I feel. But at the same time, when they needed to get their heat back there was Michelle to turn around and Big Boot someone’s effing head off, and suddenly they were on top again. She was such a beast that she gave them instant credibility, no matter how preposterous they were or how much they sold.

Even her promos and skits got way better once she started doing all the ridiculous, over the top Laycool bullshit. Her and Layla almost immediately fell into their annoying Mean Girl patter, finishing each other’s sentences and overlapping and generally being awful, awful people. You can see it being emulated today when the IIconics cut promos, and it works because it’s such a wholly unlikeable, unpleasant way to act. Laycool are the furthest thing from nWo-style cool heels, and I love them for that. 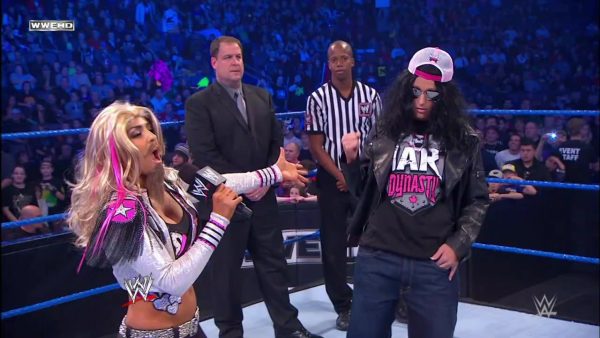 So my point is, in every aspect Michelle was improved and enhanced as a result of hooking up with Layla (and vice versa), and Laycool was a great, great tag team act. For anyone participating in the Place To Be Nation Greatest WWE Tag Teams Ever project (which should be all of you, get involved!) I hope you take a good, hard look at Laycool.

I will certainly be taking a good, hard look at Laycool in a future piece because I have a LOT more to say about their run as a tag team and their eventual break up. Believe me. But I’m going to leave Michelle here for the minute. I feel like there’s so much more I could say about this woman, I have loved her for so long, she was such a beast of a wrestler and she just had a ridiculous amount of good matches. A true workrate candidate. My girl.