While many choose to reign in the new year with the ball drop in Times Square, the Respawn Point team and hundreds of viewers worldwide prefer a slightly different celebration. As I write this very article, the fourth annual Sonic Marathon is just a couple days away from completing its yearly week-long charity marathon. 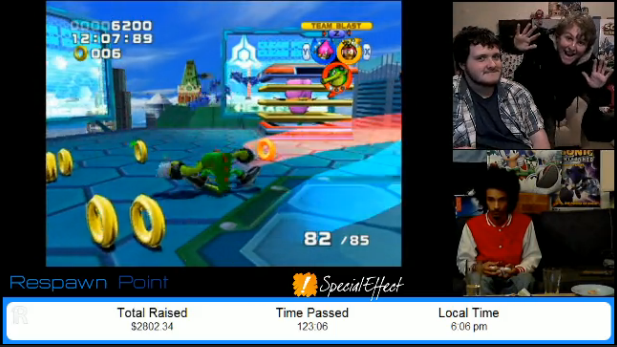 Sonic Marathon 4 (or as it’s properly named, “Sonic Marathon 4: Episode 1”) is a non-stop barrage of games starring the famous blue hedgehog in an effort to raise money for charity. In addition to the continuous stream of games, the marathon offers various community events, such as donation challenges and daily raffles. At the end of the marathon, one lucky donor will win a grand prize on Saturday, January 4th at 3:oo PM GMT.

Zack Harrot, the founder of Respawn Point, is joined by Dan Bowhay, Ash Blackledge, and Jay Zeach to play Sonic games until they drop. No game is off-limits, no matter how much the players may despise certain titles. The team has divided themselves into a day shift (Dan and Ash) and a night shift (Zack and Jay) to ensure that their global audience always has fresh players to watch.

Unlike previous years, which raised money for Child’s Play Charity, Respawn Point has chosen a new recipient for their fourth year of hedgehog madness: Special Effect, an organization that provides assistance for disabled individuals in their use of computers, video games, and other forms of technology. All of Sonic Marathon’s proceeds go directly to Special Effect, without the team touching a single cent of the money they raise. As of this writing, the team has raised $3,550, surpassing both their original $2,500 goal and the secondary $3,500 goal.

Respawn Point also runs multiple challenges and contests for the community to participate in to maintain the energy level and solicit more donations. At this time, the Sonic Marathon is currently running the following incentives:

Community Contests: Raffles for anyone that contributes to the fundraising.

Hashtag Challenges: Tasks for the team to complete if a given amount of money is donated with the necessary hashtag in the donation comments.

As further incentive for donations, Respawn Point interacts heavily with its audience. Any fanart and audio clips (well, within reason) sent in from viewers is happily showcased on the live video stream, and at least one member of the team constantly mans the community chat room. Viewers are also free to suggest challenges of their own to the team, many of which Respawn Point has incorporated into their schedule on the fly.