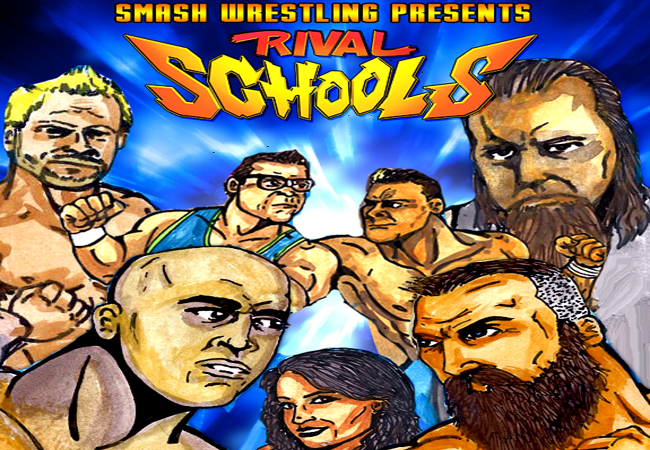 So Smash Wrestling (smash-wrestling.com) did something really cool in this ever-competitive indy landscape in 2014: they made their latest show available for free download. This was a savvy move to gain some steam and show the rest of the world the kind of action that this Canadian indy can produce.

Scott Hunter and James Kee are your commentators.

Good choice for an opener as the crowd will always give a good reaction to Iron. Pepper Parks does an admirable job in the heel indy act to along with his wife/fellow female wrestler Cherry Bomb. The action was cut at a solid pace and at just around seven minutes, the match didn’t overstay its welcome. Iron made his comeback and went to the top rope but was tripped up by Cherry Bomb. Parks takes full advantage by leaping from the top rope and delivering a neckbreaker to attain the victory. This was some solid action to start out the night.

I have never seen three out of the four guys before (only Dux) so I was greatly intrigued for this match-up. This match is a #1 contender’s match for the heavyweight championship later in the show with the winning team challenging Matt Cross. This is a trope influenced by something done in lucha from time to time where two guys will team up and try to win a tag match in order to face off against each other later on the card. I enjoyed this match for what it was. It carried four distinct themes from the feeling out process in the beginning to a brawling match on the floor. Things regained control on the inside with Vega getting worked over and then a frantic finish with all four guys doing a bevy of maneuvers. The two standouts in the match for me was Brent Banks who has a cool heel persona and was great in being a dick to Vega throughout the match. My personal favorite spot of his was him coaching Vega to the ropes when he was locked in a Boston Crab by Dux. The other standout was Scotty O’Shea. All of his high flying moves were hit crisply and he threw some nasty strikes including a side headbutt right before the finish. He also did a neat spot on the outside with a running dropkick to a prone Banks sitting in a chair. I didn’t really dig the finish all that much as while the narrative of Banks stealing the pin from Vega was clever, I would have liked to have seen the more cohesive team of O’Shea and Dux be rewarded with the win. Still, Banks and Vega advance to the main event and this match was a testament to four hungry guys working extremely hard on the indy scene.

Kraven is probably one of the tallest competitors on this entire card as she towers over Cherry Bomb and referee Jimmy Korderas. The match was rolling along ok with Kraven dominating until Cherry Bomb legitimately injures her ankle on an corner splash bringing the match to an abrupt stop.

Alexander is probably the most hyped guy in the Canadian indies currently. I really appreciated that O’Reilly came out in both his ROH tag title belt and the PWG world belt giving himself and the match some added prestige. The opening matwork provided by Alexander was really slick, mixing in some interesting technique in rolling through the attempted reversals by O’Reilly. He also is able to get a nasty looking stretch muffler on O’Reilly. O’Reilly being the undersized man in this match and playing the defacto heel is a pretty tough position but he portrays the overconfident bully persona well. O’ Reilly gets some flashes of offense but Alexander dominates the beginning portion of the match and tries to systematically neutralize each of O’Reilly’s limbs to avoid his strikes. O’Reilly is able to lock in some armbars proving that he still can be a threat. O’Reilly tries a kick in the corner and pays for it dearly. He switches it up with an elbow smash and works out the leg. O’Reilly takes over for the first significant time in the match and focuses on Alexander’s left arm and shoulder. We get some good joint manipulation spots and a driving knee to the arm and back. Alexander fires back with two northern light suplexes and we are all square. Smash does a great job getting some close up angles really showing the anguished facial expressions of the competitors. Alexander takes a big chance with a dive from the top but he gets caught in an arm triangle. Picking up from the beginning of the match, he is able to reverse that into a leg submission. One more reversal from Alexander and a twisting tombstone gives Alexander the huge win over this established indy star.

Now this match won’t be on my year end MOTY lists, but it was a hell of a lot of fun and just what I needed at 11:00 PM at night when I was debating whether to go to sleep or power through this show. The match starts out with the Smash Brothers dominating and doing a tag team king of the mountain spot disallowing Suave or Greed to gain an advantage. Once the match breaks down, The Overdogs are more in the fight and end up gaining a 1-man advantage for the match when Player Dos is sent careening through a table from a balcony area railing. I should mention that this show look like it took place in a fun zone type place where there is skating, an arcade, bar, etc. That atmosphere really added to this match for me and the wrestlers were extremely unique in making the physical limitations an advantage. I also enjoyed the fact that even though the Smash Brothers were the faces of this match, they were utilizing the no DQ stipulation. Player Dos refused to go back to the dressing room area even though he was eliminated and he helped his partner mount a comeback. Greed is a big hoss that loves to play the bully role but can surprisingly show some aerial ability. He does a running cannonball senton into a fat security guard and The Overdogs looked to have the match all but won. Greed gets a little “greedy” though and places Uno on the top rope allowing Uno to reverse his fortune and superplex Greed through a table in a great spot. All of those spots were eclipsed by the finish though. Suave is held in Gory Guerrero special by Player Uno while Player Dos dives off the top rope with a twisting ace crusher through the table. This spot looked absolutely sick and was executed perfectly. The match feels like a huge victory for the Super Smash Brothers and the crowd erupted at the finish.

I hate indy wrestling dance offs. I don’t find any redeeming qualities in white guys dancing like white guys. That being said, when Elgin busted out the worm in the opening stanza of this match I popped huge at how surprising this was. That was the highlight of the match as the rest resulted in a collection of spots which is the type of match that doesn’t appeal to me. Everything was hit cleanly but was lacking the gravity of cohesive story to keep me heavily invested. Mushroom stomps, brawling on the outside, tons of rope running. It all ran together for me. ACH does doe an inside twisting dive to the outside that he is able to land on his feet on. The match ends after Elgin takes a nasty kick to the face and then immediately does a super powerbomb from the second rope. I can see how this match has fans, but I am not one of them.

Hero doesn’t look like he is ready to re-sign with WWE anytime soon with his current physique. He wastes no time laying waste to Watanabe and Watanabe craftily rolls to the outside and then delivers some nasty shots of his own. Jim Ross would call this match a slobberknocker and it lived up to the promotion billing of smash wrestling. Watanabe ties Hero up and does some ground control work. Hero does the great HHH/Harley Race tumble bump to the outside which given the tight confines is quite dangerous. Watanabe follows up with a chair and is standing on Hero. He has really perfected a few little touches in this match to present himself well as the heel. Hero’s comeback is fierce with yakuza kicks, nasty chops, and a dropkick through the ropes to the outside. The crowd and Watanabe’s heel work played off as they are firmly behind Hero now. Hero dismantles Watanabe and has him on the brink when Watanabe fires back showing some great resilience. We end up with a double knockout spot but it resonated so much better for me than the ACH and Elgin stalemate given the build-up and damage down leading to this moment. Jimmy Korderas gets knocked away and Watanabe takes full advantage hitting a lowblow and getting a nearfall with a roll up. Watanabe ascends the top rope and hits a big boot. A disgusting rolling elbow gives Hero the well-earned victory.

Oh man, Matt Cross doing the Goldberg entrance is hilarious. That beard is something else and I am glad to see our chubby security guy is back on his feet. Kayfabe man. Banks does the ingenious offset of attacking Cross by his huge beard. Banks and Cross are featured in the ring for a while with Vega displaced on the outside. Vega comes back and gains a measure of revenge for what happened in the tag match earlier. Like most three ways, this had to follow the scope of one guy being displaced on the outside and the focus being on the remaining two guys in the ring. Vega and Banks both took their shot at Cross and he was able to avoid and use his high flying ability to evade unrecoverable damage. Cross does a spot where he dives head first into the top rope and then delivers a back elbow to Vega. More intricate three way spots are played in the finish and done well as to not look overly contrived. Cross delivers a space flying tiger drop to the outside to the admiration of the fans. It looked like Banks might have the title stolen with a standing sliced bread #2 delivered to Vega but it is only a nearfall. Cross hits a spear on Vega keeping the Goldberg gimmick alive and then delivers a huge shooting star press to retain the title.

This was a greatly enjoyable show that is definitely worth the free download. My match of the night would be Watanabe vs. Hero followed closely by Alexander vs. O’Reilly and the tag title tables match. The only disappointing match for me was ACH vs. Elgin. Smash Wrestling does a nice job of mixing in big indy names (Elgin, O’Reilly, Hero) with Canadian up and comers (Banks, Alexander, Vega) along with some names from the past getting a big rub with the promotion (Dux, Cross). It is a fun crossover and differentiates itself as a promotion from the murky landscape that is independent wrestling in 2014. High recommendation to watch.