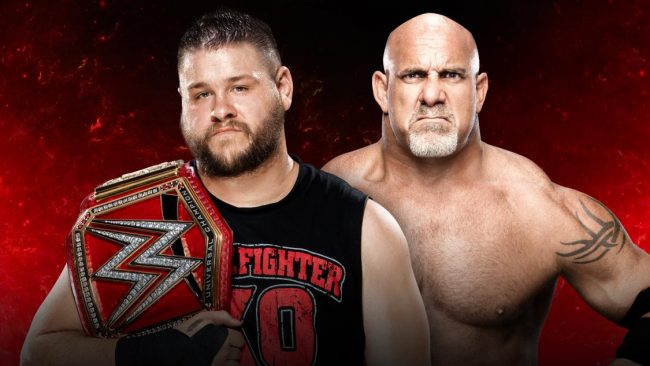 Joe puts Sami down with leg kicks to start and rolls into a kneebar, but Sami comes back with a flying headscissors and slugs away in the corner. Joe casually swats him down and follows with an enzuigiri in the corner. Joe with a bow and arrow hold and he fires away with chops and then viciously clips him to cut off a comeback. Sami finally does start his comeback and hits the powerbomb for two. They head up and slug it out on the top rope, but Joe puts him down with an atomic drop and senton for two. Powerslam gets two. Sami does the bit where he “collapses” and then cradles Joe for two off that. “He might have been playing possum!” declares Byron Saxton, showing the insight and quick wit he’s known for. Sami goes up, but Joe hits another enzuigiri up there and catches him with the uranage and choke to finish at 9:48. Felt like it should have been shorter if they were going for that booking, but it was a good opener for the most part. **3/4 Sami got nothing, which is fine, but you could have accomplished that in 5:00 quite easily.

Apparently Wrestlemania is the “ultimate thrill-ride”. Seven hours is a hell of a long time for a thrill-ride.

They’re even doing the obnoxious crowd reaction shots for Enzo’s promos now. Cass cleans house on the champs to start and tosses Enzo onto them, but Enzo immediately walks into a flying knee and gets beat up. So as usual Enzo talks big and then gets his ass kicked for an extended period of time, and now they’re doing crowd reaction shots to chinlocks. Enzo escapes to the floor and dodges both heels, but walks into another high knee from Anderson because he’s Enzo A-Moron. See, I can make funny names just like him. Finally Enzo dodges a charging Anderson and makes the hot tag to Cass. Cass throws Anderson around with slams, but goes after Gallows and gets rolled up for two. Big boot sets up the Rocket Launcher for two, but Gallows destroys Cass on the floor and Anderson pins Enzo at 8:41 because he’s useless as usual. Just a match. **

Meanwhile, Stephanie is unable to be here tonight, so she castrates Mick Foley over the phone instead.

Sasha attacks to start and gets nowhere, and Jax beats on her for two. And we go to a surfboard as Saxton explains that “Boss” stands for “Built on self-success”. WHAT HUMAN BEING TALKS LIKE THIS?! Nia continues slowly beating on Sasha as this drags on. Nia with a torture rack and she just walks around the ring like that with Sasha in no apparent pain whatsoever, until Sasha swings into a guillotine. That doesn’t work, so Sasha tries a sleeper instead and Jax escapes that as well. They do an awkward spot in the corner so that Sasha can maneuver into the Banks Statement, but Nia breaks free and chokeslams her. Legdrop to the back, which the announcers call a splash, but Sasha manages to get a rolling cradle for the pin at 8:24. WAY too long and pretty terrible, with poor pacing and no chemistry, as Jax just isn’t ready for this position. ½*

Meanwhile, Handsome Rusev and Jinder Mahal suddenly break up on the pre-game show, and in fact they decide to actually stretch this out by having them both face “suitable competition” on the show tonight instead of just having a match against each other. Rusev, who declares “You stole my idea of asking for better competition!”, is as usual woefully underutilized.

Jinder actually beats up Handsome Rusev before the match and lays him out on the floor, which I just can’t even. Saxton is excited about this and declares that it feels like Wrestlemania here tonight. What, seven hours long and filled with part-timers? Cesaro with a gut wrench for two and a backbreaker for two, and Jinder bails off that. Back in, Mahal chokes him out and gets a clothesline for two as the announcers discuss his “newfound singles career”. Weren’t they only a tag team for, like, a month? Jinder with a low dropkick for two and chokes away on the ropes, apparently the human being on earth unable to have a decent match with Cesaro. Corey notes that it only takes one strike to change things. In Mahal’s case, he looks like he should already have two strikes at this point.

Mahal gets distracted by Rusev, and Cesaro comes back with his stuff and finishes with the uppercut at 8:15. *1/2

Show pounds away on Rusev and gets a splash in the corner, and the Final Cut gets two. Rusev slugs back, but Show cuts him off, so Rusev clips the knee. And goes to work on it. Show with a sideslam for two as this show has just ground to a screeching halt and fallen off a cliff. Rusev escapes a chokeslam and goes back to the knee again, then hits a pair of kicks for two. And he tries to follow with the Accolade, but Show chokeslams him not once, not twice, but thrice and then punches him in the corner and pins him at 7:35. I have no idea what the point of that entire segment was. Rusev and Mahal are seeking a bigger role and both job like complete geeks? DUD

Milwaukee must be an incredibly forgiving crowd to not be completely turning on this horrible show thus far.

Meanwhile, Kevin Owens is unimpressed by Goldberg’s win-loss record for the past decade.

But first, we check out Austin Aries and his beautiful package! It was so massive they could barely trim it down and make it fit. Gallagher works the arm to start and holds Neville off with a headstand in the corner, then puts him on the floor with some gymnastics. Gallagher follows, but Neville sends him into the railing to take over. Back in, missile dropkick gets two and Neville slugs away in the corner. Snap suplex and corner clothesline get two. Gallagher fights up with dropkicks and Neville bails, so Jack follows with a dive (“The Wounded Duck Plancha” as Aries dubs it) and back in for a top rope backdrop suplex, which gets two. Neville drops him on the ropes, but Jack with a rollup for two. Neville then DESTROYS him with a release german and gets a Phoenix Splash for two. Neville puts him down with kicks, but Gallagher headbutts him twice to put him down, for two. The running kick misses and Neville boots him to the apron, but they fight on the top rope and Neville blocks a superplex and finishes with the Red Arrow at 12:00. That certainly perked up the show a bit. Nothing you can’t get on 205 Live, though. ***1/2

Meanwhile, Paul Heyman is here for reasons that are privileged between himself and his client.

The New Day are here, apparently finally able to deliver on the ice cream they’ve been promising for weeks now. Of course, they don’t actually SHOW the ice cream or say anything of note, because I guess that’s the Wrestlemania payoff.

This at least has some heat to it, as the announcers say “Big fight atmosphere” a billion times. Roman gets overpowered to start, but slugs away out of the corner and clotheslines Braun to the floor. They fight out there for a bit and Roman slugs away back in the ring, but Strowman puts him down with a spinebuster out of the corner. Big splash gets two and we hit the chinlock. Reigns fights out, so Strowman gives him the inverted chokeslam for two. Back to the floor and Braun preps the table, but Roman fights back and they head back in. Roman comes back with a samoan drop for two, but Strowman dodges the superman punch and hits a Big Ending for two. Braun misses a charge and hits the floor, so Reigns follows with the Drive-By, but gets slammed through the table. Back in, Roman suddenly catches him with a spear for two. Another try is dodged by Strowman, but Roman hits a pair of superman punches before walking into a forearm. Braun goes up and goes AERIAL, but misses his splash and Roman finishes him with a spear at 17:12. I swear to god they’re just trolling the audience at this point. Like why would you spend MONTHS building up Strowman and then just have him lose clean to ROMAN REIGNS of all people? Match was, as usual for tonight, overly long, but Strowman held in there really well and it had good heat. ***1/4

Meanwhile, Mick Foley lets Samoa Joe know that he probably shouldn’t go out there and interfere on behalf of Kevin Owens tonight.

Bayley wins the wrestling battle to start and they head to the floor for a Bayley headscissors off the apron, and back in for a high cross that gets two. Charlotte bails to escape again and catches her with a cheapshot to take over. Charlotte with a chinlock, but Bayley fights back until Charlotte puts her down with the knees in the corner for two. Charlotte with a headscissors on the mat to control her, and that gets two. Charlotte controls with a facelock and turns it into a Final Cut for two. Charlotte with a moonsault for two. According to the Bryan Alvarez theory, hitting the moonsault means Charlotte loses. Charlotte puts her down with chops and keeps yelling “You’re just a fan!” as her big insult. That’s some pretty weak smack talk considering her heritage. Bayley finally comes back with a back suplex for two. Bayley hangs her in the Tree of Woe and that whole sequence just goes completely south and I have no idea what they were going for. Bayley heads up and they fight it out in the corner and Bayley eventually gets a rana and drops the flying elbow for two. Charlotte dumps her and hits Natural Selection back in the ring, for two. Bayley with a crucifix for two. Charlotte slams her off the apron in a nice spot as the announcers are going way too heavy on the “Bayley is going to lose the belt” angle for the entire match. This brings out Sasha Banks, and Bayley hits the Belly to Bayley on the floor. Back in, Charlotte with a small package for two, but Sasha breaks the count, and Bayley hits the Belly to Bayley for the pin to retain and break the PPV streak at 17:02. What an underwhelming way to end that storyline. If they were going that route, why not just have Bayley win the title here? Pretty dull match with a couple of very notable botches and a bad finish, but not overtly terrible or anything. **1/4

Owens with the world’s longest stall before the bell even rings, walking around the ring for nearly 5 minutes, and then they actually have the balls to do a music distraction finish, as Jericho’s music hits and Goldberg wins the title at 0:20.

What a huge steaming pile of bullshit that finish was. They literally used the laziest possible way to get out of actually doing the match, barely even delivering the one match on this show that had any serious interest. Not to mention that the rest of the show felt like it took 7 hours to get there.