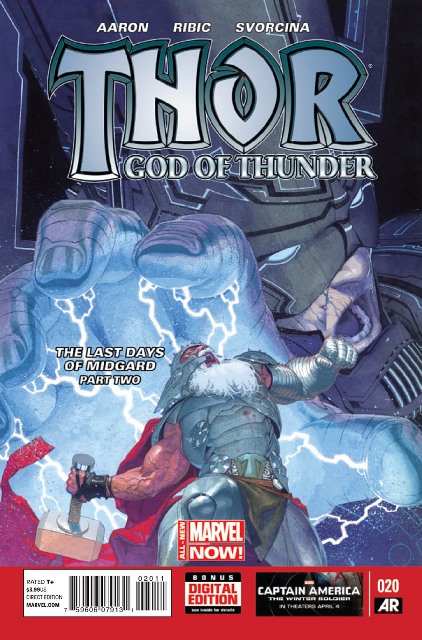 Art and cover by Esad Ribic
$3.99
Published by Marvel Comics

Talk about ramping things up! Jason Aaron gives us a second chapter that moves the story forward in big ways and still manages to spend a lot of time setting up a coming storm. As he did with the God Butcher, Aaron is establishing Roxxon and its CEO Dario Agger, aka The Minotaur, as worthy adversaries. While in the distant future, the parallel story of King Thor taking on an aged Galactus is even more intriguing. After sending away his granddaughters, Thor faces the world-eater and demands he leave Earth or be destroyed. An idle threat, really, all things considered. In a lot of ways, seeing this weary Thor guarding a dead planet from destruction seems more like a captain ready to go down with the ship. It’s one of those epic hero moments perfectly illustrated by Esad Ribic that’ll really stick with you throughout this story. Speaking of moments that stick with you, when Agger undergoes his first on-panel transformation it’s one of the most intense scenes in this series yet! His name takes on quite a literal meaning and it sets up a major battle to come. The pacing of this issue was right on throughout. It never felt slow, even in the moments between Thor and Roz Solomon come off as charming and awkwardly funny as Thor is clearly trying to flirt and be serious all at the same time. Aaron and Ribic have packed so much into this issue you’ll have to read it twice to catch all the subtle nuances. That said, it did end just as things were getting really interesting and should have been a few pages longer. Bring on issue #21!

Boxed for fans of: Clash of the Titans and Wall Street (the 80’s movie) 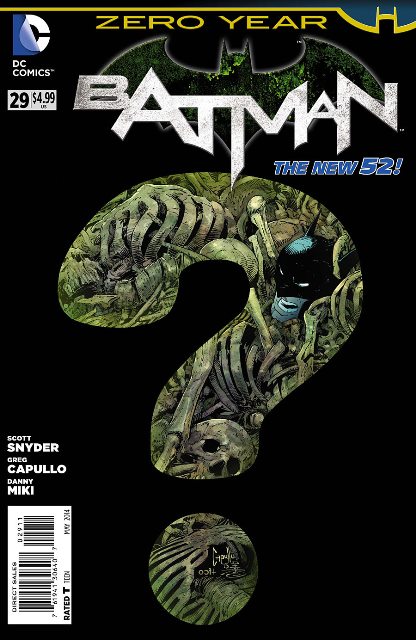 Art and cover by Greg Capullo
$4.99
Published by DC Comics

When Scott Snyder and Greg Capullo close a chapter, they really close a chapter. If you ever thought of The Riddler as someone not dangerous enough to truly challenge Batman, you need to read this issue. But the excitement is only part of the fun in this one. There’s also a reference to the only good part of Frank Miller’s All-Star Batman and Robin along with a Bat Blimp…yes, a Bat Blimp! Snyder’s writing is as strong as it’s ever been as links the parallel stories of the night Bruce’s parents died to the night Riddler attacks Gotham. He also does a great job of wrapping up the Doctor Death subplot that’s been running for the last few issues. We even get some major gaps in DD’s origin filled in along with advancing the rise of Jim Gordon as a real leader in the GCPD. If this issue sounds packed to the brim with story, it is. However, that’s a good thing as it allows Capullo to shine like never before. When the Bat Blimp breaks through the clouds over Gotham, it’s a jaw-dropping moment. As is Doctor Death’s full transformation. If ever there was a doubt about Capullo being the guy who should always be on a Batman title, let it be erased now. Aside from all the action, there are so many little character moments that add weight to every scene. When young Bruce is talking to his father about why he thought a movie was cheesy rather than exciting, it’s one of the best father-son moments ever committed to the comics page. And the banter between Bruce and Alfred might just be the best it’s ever been, and that’s a lot of history to consider. Zero Year might be going on a bit longer than most hoped it would, but the payoff is so worth it. The Savage City arc begins in issue #30 and will be the final arc of Batman’s first adventure. If it’s half as good as Dark City has been, it’ll be worth twice what we’ll all pay to read it.

Boxed for fans of:…we’ve been over this, it’s Batman. Everybody loves Batman. 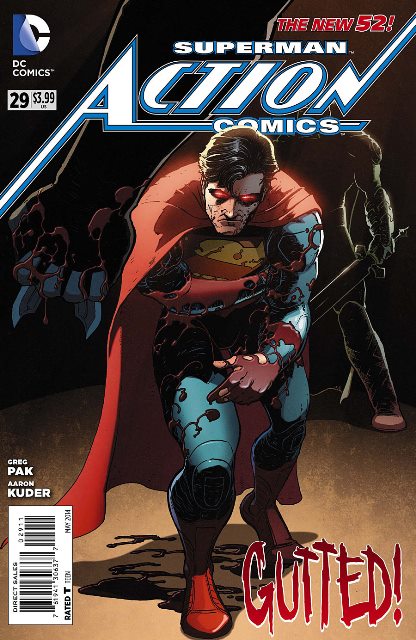 Art and cover by Aaron Kuder
$3.99
Published by DC Comics

Greg Pak has just cemented his place among the best writers to ever handle the Man of Steel. All the emotional moments from the previous four issues finally explode in this one and it’s one of the most satisfying fights ever! If you happen to love dogs, you’ll feel every ounce of anger Superman does when Ghost Solider unleashes on a group of “monsters.” And Aaron Kuder captures every ounce of fury in Superman’s eyes when he unleashes a seriously ferocious heat vision attack…twice! But this isn’t the Superman who ignores collateral damage. Even though no humans are harmed, the environment and some small creatures are and it gets to him. This is the Superman we all wanted to see all along and Pak got it just right. Those in control of The Tower are about to find out why you don’t piss this modern Superman off and it’s going to be a really crazy fight and revelation (seriously, it happened in issue #30 so go get it, too!). Much like the other issues in Pak’s run, he gives Lana Lang some of the best character moments in the entire issue. It’s hard not to feel her heart breaking at the realization that she won’t be able to do what she set out to from the beginning. And the moment she shares with Clark just drives that home even more. This is the best issue of the series to date and it shows exactly how to make Superman into a character even non-Superman fans would want to read each month. The crossover, Doomed, is coming up in the next arc, but don’t let that turn you off. This series is on a high note right now and with this creative team, even when it lags a bit it’s still a great read. 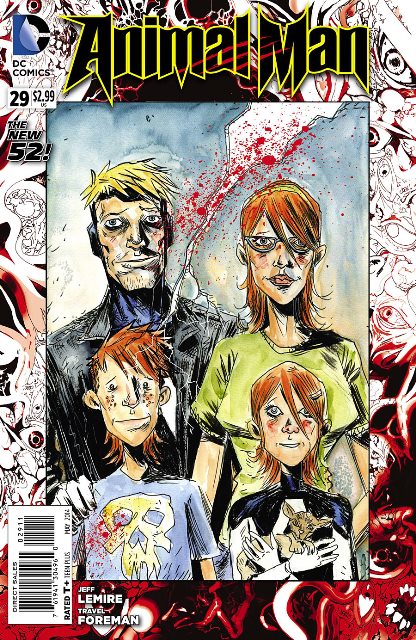 Art and cover by Jeff Lemire and Travel Foreman
$2.99
Published by DC Comics

If you’ve been keeping up with this series then prepare to have tears in your eyes. Even if you haven’t, the way Jeff Lemire and Travel Foreman present this final issue will get the water works going. Foreman and Lemire share art duties as Buddy Baker listens to his daughter Maxine tell him a bedtime story all about their adventures since issue #1. Lemire illustrates Maxine’s story as a children’s tale and told in storybook format and it’s so beautifully perfect you can’t help but stare in awe of it. As the tragedy of it all unfolds, there’s something reassuring in the tone and events despite all the sadness that comes from it. As it ends, you can feel the bond between father and daughter being stronger than ever and somehow you know this isn’t the end. In fact, it really isn’t. Buddy has made a deal to release Maxine from The Red and made sure that new, more trustworthy totems are in place so that he can continue being Animal Man (over in Justice League United!). For this series, though, this is the end. Buddy’s family is safe and out of harm’s way, though the secret he’s keeping from his wife is bound to come back to haunt him sooner or later. And even though his son died several issues back, we get a small glimmer of hope that ties back to the Annual #2 in the closing panels. And if that doesn’t get your eyes watering, nothing will. If you missed out on this series, go get the trades (and Swamp Thing from Scott Snyder, too!). You’ll be glad you did.

Boxed for fans of: Gladiator, The Princess Bride, The NeverEnding Story 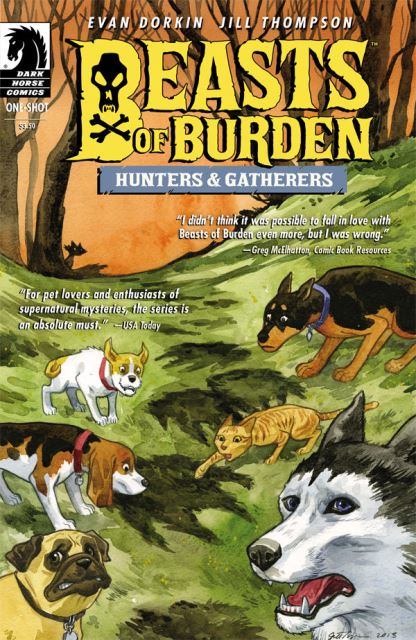 1. Beasts of Burden: Hunters and Gathers one shot – Written by Evan Dorkin

Keeping this “animal lover” theme going, here’s another example of why Beasts of Burden should be an ongoing series. The story is a continuation of previous events, but it still manages to be accessible to those who may never have tried an issue before. Evan Dorkin and Jill Thompson make each character come alive on the page and really register on a deep level with the reader. If you’re a fan of shows like Supernatural or Sherlock and movies like Homeward Bound: The Incredible Journey, you’ll want to pick this up. It’s got great mystery, suspense and some of the best laugh-out-loud humor you’ll find in comics today. And even though it gets into some pretty heavy mystics, Dorkin knows how keep his characters smart and not just relying on deus ex machina. For long-time fans, there’s so much throwback to previous stories in this one (watch out for the rats!) you’ll be begging for another round of this by that last page reveal. For the unfamiliar, this is actually a good introduction to the characters and the world they inhabit. And you’ll likely read it at least twice just to take in all of Thompson’s amazing art. Her painted style is beyond what most current comic artists would even attempt, let alone succeed at. If you want something truly different, this is a good place to start. Though, be warned, it does have some moments that might not be for the squeamish. It is still a horror title, despite being closer to all-ages than the typical scare book. You may never look at your pets the same way again.