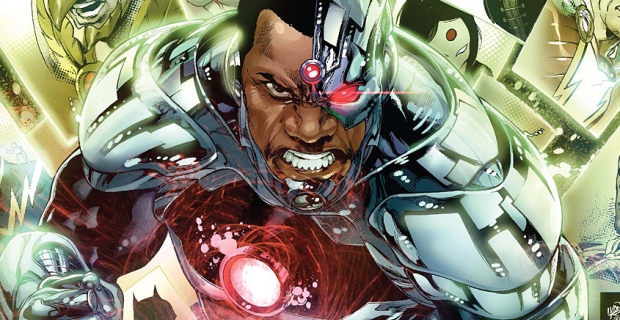 A lot of us were surprised that Cyborg was getting his own solo film in the DC Cinematic Universe. Not because he’s not a great character, but because he doesn’t even have a solo title running right now (which hopefully gets corrected in the post-Convergence DC Universe).

Cyborg has always been a team-player in the context of the DC Universe, but he’s rarely had a solo go. There was a mini-series in 2008, but it didn’t spawn an ongoing title. Today, though, Cyborg is a founding member of the Justice League and has had quite a few great hero moments of his own (see his team-up with The Metal Men during Forever Evil).

His star has been on the rise since a fantastic turn in the Teen Titans animated series made him come alive for a whole new generation of fans, but he was always beloved by fans of the Marv Wolfman and George Perez-era Teen Titans comic. But can he carry a solo movie? What kind of direction should this go? Will audiences support the character outside of the Justice League?

There are many paths this movie could take, but it’s going to need the budget to make it work first. As far as effects go, it may have a similar path to the first two Iron Man films and a budget of about $200 million would cover just about anything the movie would need. It could probably get by with less. Maybe around $170-180 million could work, but it would be nice if Warner Brothers invested a little heavier to ensure a better chance at more impressive visuals.

The risks for this movie are not as substantial as certain others. Cyborg is largely a supporting player who’s looking to break into the bigger picture. If his movie fails, he can just return to that role without much worry. And if WB/DC continue to give his character a push as they have over the last four years, he could easily gain enough traction to try again later.

But let’s look at it like the movie succeeds. If it resonates with audiences, it could launch a brand new franchise, and that’s exactly what WB needs. What the DC Cinematic Universe doesn’t have yet is an “Iron Man” like franchise. It needs one and this could be the ticket. While Victor Stone’s story is initially tragic, he’s a very upbeat character when he needs to be and that could be just the way to get audiences on his side.

Ray Fisher has already landed the lead role, so no doubt he’ll be the lead in this film. As for a villain and story…that’s harder to narrow down despite there not being a huge amount of solo Cyborg adventures to draw from…or is there?

Cyborg had a real breakout moment during the big DC crossover event Forever Evil. Cyborg could arguably be called the real hero of that story, other than Lex Luthor. He revived The Metal Men and helped take down the Crime Syndicate in one of the coolest battles in years. But how could that play into a solo film?

After Forever Evil, lots of comic fans were calling for a Cyborg and The Metal Men ongoing title (me being one of them). This idea might be worth exploring on film. WB/DC has been attempting to expand its cinematic universe and this could be a great way to do it without needing a ton of separate solo movies. Exploring The Metal Men mythos within a Cyborg movie could open lots of possibilities for exploring what it truly means to be human and/or alive. But what about a villain? We have to have one, right?

As for villains, I’d argue for an introduction of Cyborg’s evil counterpart, Grid. Grid was created by Geoff Johns and Ivan Reis during the Forever Evil crossover and revealed to be a living consciousness within Vic Stone’s new cybernetic body. It caused the machine to turn on the man and reject its human host. With the Justice League incapacitated, there wasn’t much standing in the way of Grid’s takeover of every communication form in the world. In a film, Grid could be similar to any computer virus, seizing control of various defense systems and turning them against their users and setting up potential world-wide conflict. When Cyborg realizes the enemy is within, it could open up all sorts of avenues for exploring the true nature of good and evil.

Cyborg’s role in the Justice League comic has been one of organizer and strategist, which is perfect for him since he’s tied into every computer across the world, including satellites and he’s a former quarterback. He knows something about thinking on the move. But he’s also equipped with enough firepower to suit a small country. But being in that position could cause you to lose sight of who you are as a human being. He’s still got his mind and his heart, after all.

What about a director for this one? That’s hard to pin down, but there might be a good choice in Alan Taylor, if he’s not too tied up with Marvel Studios after Thor: The Dark World. He’s got Terminator Genisys coming up soon (terrible name), and so far it doesn’t look too bad. His ideas on exploring humanity and his eye for action scenes could serve this movie well. Having directed a Terminator film won’t hurt much, either.

Of all the DC films coming out, this is the one that needs to set itself apart the most. Adopting a more hard sci-fi tone rather than appearing as a superhero movie would help establish its own identity and create more franchise potential. Let’s just hope WB/DC realize this and don’t try to make it into another Iron Man.

When this movie comes out the hope is that Cyborg has been established as a strong enough lead character to carry his own film. After turns in Batman v Superman and Justice League parts 1 and 2, he’ll have had quite a bit of screen time, for sure.

Familiarity might be what helps push this movie toward being a hit. As of now, Cyborg isn’t exactly a household name, but he could be. Finding a way to tap into that generation of fans who helped make the Teen Titans animated series a hit several years ago could go a long way toward accomplishing that goal. Those fans are ready to love DC Comics movies; they just need something familiar to latch onto.

As for fans like me, we’ll be there no matter what. We’ve sat through way worse, I’m sure. I mean, we all remember the 2011 Green Lantern movie, right? Speaking of which…

Come back in two weeks for a breakdown of the rebooted Green Lantern!