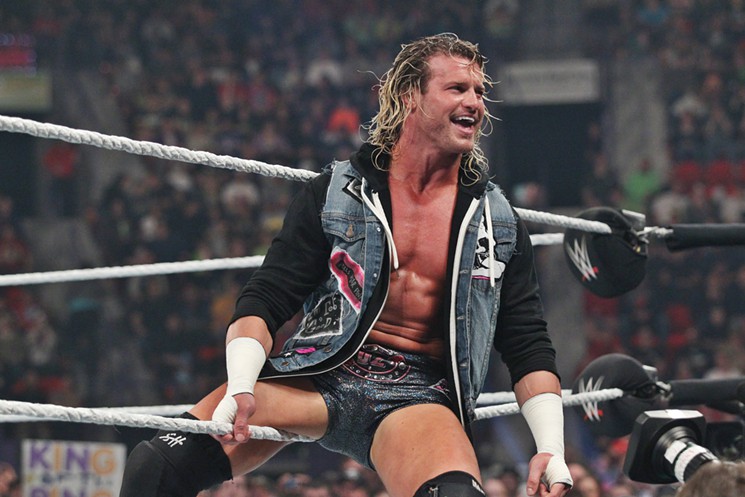 How’s everyone doing? Hey that’s great.  Let’s get to the mailbag.

Well in a sense you could say Daniel Bryan for the second one, because they finally gave in and pushed him (TWICE!) and both times he immediately got injured and was out for the long-term. So in that case, they were kind of right. As to when not listening to the fans ever benefitted them, the answer was typically “most of the time” because it was a promotion’s job to tell the fans what to think, not the other way around.

Hi Scott Hope you and the family are well! Here’s another A or B list of questions. For those new to the game, here’s how it works. I give Scott a Question/Scenario and then two options. He then decides which he prefers, A or B. So, without further ado, let’s get the motor running!

Number 1 – Which building do you think made a better venue for wrestling?

Option A – Wembley Stadium Or Option B – The Houston Astrodome

Gotta go with Wembley, because it was filled with crazy British fans and made for a great atmosphere.

Number 2 – When in their primes, who was better at their particular style of wrestling?

Mysterio was a high-level flyer, but Mick Foley pretty much innovated a whole new style of wrestling as a part of ECW by merging hardcore brawling with the kind of post-ironic comedy of the Attitude Era. Mick wins.

Number 3 – Out of these two matches that featured a smaller babyface overcoming a bigger heel, which one do you think was the best?

The Michaels match is one of my all-time favorites, and I have no particular attachment to the Flair match.

Number 4 – Who did a better job of making a title seem prestigious?

Cena, because he actually drew ratings while defending his title.

Number 5 – Who made the better commentary team?

Jim Ross was so much better than Tony it’s not even funny.

Number 6 – Which WrestleMania did you enjoy more?

Option A – Wrestlemania VIII (Flair Vs Savage, Bret Vs Piper, Hogan Vs Sid) Or Option B – Wrestlemania X (Bret Vs Owen, Shawn Vs Razor, Macho Man Vs Crush)

Number 7 – If you’re in control of booking, which scenario would you rather go with?

Option A – Instead of bringing Mick Foley out of retirement for Wrestlemania 2000, you roll the dice on Rikishi as Linda McMahon’s representative in the fata; four way. Rock eliminates Rikishi in the 4 way and you use it as a way to build tension between them, leading up to a summer heel turn for the “Big Kish” on the, by then, World Champion Rock Or Option B – Instead of turning Bret Hart heel in 1998 WCW, you keep him as face with the goal of having him beat Hogan for the title at that years Starrcade. Caveat is that you can’t put the World Title on Goldberg until at least 1999. Do go with the long build to Bret title win, or do you strike with Goldberg while the iron is hot?

I dunno, both of those are kind of not great, but I guess the year long build for Bret would have been better.

Number 8 – Who do you think would have had a better chance of getting over?

Option A – Scott Norton in 1995 WWF as heel “Arm Wrestling Champion of the World”. He would eventually end up in a feud with a Luger/Bulldog/Ahmed type guy, who he clocks with a sucker punch just as they’re about to beat him in an Arm Wrestling Contest. Big beat down and then an insta feud. Let’s give him Jim Cornette as his manager too, as promo’s were never his strong suit. I think he’d have a decent chance of being a moderately over mid card attraction, if only because the mid card wasn’t very strong at that point in time and the gimmick was slightly less silly than the “Evil Plumber/Garbageman/Dentist” stuff other guys were doing. Or Option B – Disco Inferno in 1999 New Japan as the “wacky gaijin babyface” who works in the Junior Heavyweight division. Turn up the cheese and have him play it for comedy. Something makes me think the Japanese crowd would dig that for some reason. You could even have NJPW poach Magnum Tokyo from Toryumon and reunite them as a team.

Disco was always going to get over better than Norton for a lot of reasons, so I’ll say “B”.

Weren’t they the Show-Gunns?  Anyway, that’s the answer.

Number 10 – Which of these two Hulk Hogan matches at Wrestlemania do you prefer?

Slaughter was a pretty underappreciated match, so I’d vote for that one.

And one more to finish things up…

People compare Ziggler to Shawn Michaels as a worker and while WWE booking has done Ziggler no favors, that’s kind of a crazy comparison, no?

Michaels had several classic matches within the first few years of being a singles star.

Feels like he has had a ton of really solid 3-4 star matches but something always keeps his matches from being “classics.”

I don’t think many people compare Ziggler to Michaels in any way except cosmetically, but yeah, Shawn was working at an insanely high level even when he was a tag team wrestler in the Rockers. Ziggler has some cool stuff, but he seemingly has no understanding of how to sell as a babyface or how to pace his comebacks. Shawn might not have had all the flashy moves, but if you go back to 2002 when he still wasn’t sure if his back was healed, you can see him having great matches just by knowing when to make his comeback and by building sympathy through selling.  Ziggler bounces around like a pinball and then just randomly decides it’s time for the big comeback, and also doesn’t seem to understand the concept of transition moves. He’s really better off as a heel.  And yeah, to be honest, I can’t even think of what his best match would be as a single.  He had some really good ones with Kofi Kingston over and over that were around the **** level, but that was kind of his ceiling and he’s only gone downhill from there.

Be sure to check out more from Scott at blogofdoom.com