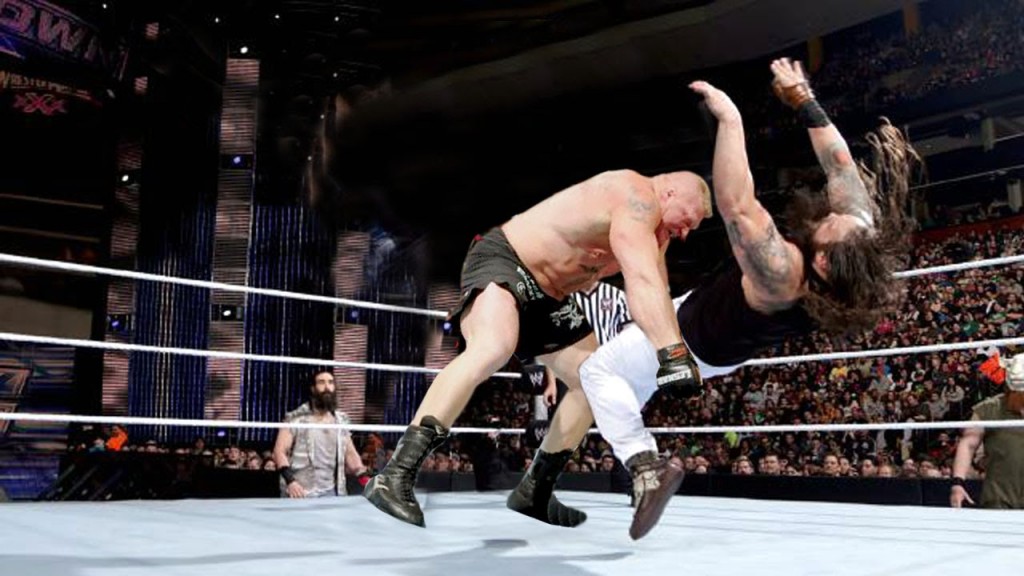 Lots of action in the inbox after the Royal Rumble, so let’s GET IT ON.

I fail to understand this new direction for Brock Lesnar.

He defeated UT in the trilogy, which was essentially his final vindication as the new phenom of the WWE. It was hinted that he had climbed to yet another level, deity-level or whatever.

He goes away for a while with the promise that he will conquer the world once again in an even more dominant fashion.

Rather than pulling off incredible feats of strength and athleticism in the rumble and making it to at least the final four. He gets mugged by the WYATTS!!!!!!??? And what’s worse he TAKES IT!!!!???? He doesn’t seek revenge or anything. Wtf????

Is this really the way WWE want to use their biggest attraction at supposedly the biggest Wrestlemania ever??

I don’t care what anyone says, Bray sucks. Apart from a few creepy promos here and there, what does he really offer? What is so remarkable about his ring work?

I just don’t get it…..the only thing I can think of is the Wyatts are being used as a stepping stone for Brock at Fast Lane, but that’s wishful thinking.

How can anyone conceivably think Bray/Wyatts are the way to go in filling the extra 20-30 thousand seats needed to hit the 100,000 mark??

Because they need something for Brock to do and someone for him to smash at Wrestlemania, and the choices are pretty much Bray Wyatt, Alberto Del Rio or Sheamus. Sheamus would admittedly be fun but a total waste, so they went with Bray.  Ideally the choice would have been Randy Orton, I think, but injuries are injuries.

Who do you think AJ’s opponent at Wrestlemania will be? Any chance we can get Styles vs Brock in David vs Goliath? Anything but Brock v the frickin’ Wyatts (which will absolutely suck)!

Lots of hate for Brock-Wyatt this morning, I see.

Were I a betting man, which I am not, I’d bet we’ll get an 8-way IC title ladder match deal with Ambrose/Owens/Zayn/AJ/Jericho/Ziggler/etc. They’ve also talked before about moving up Money in the Bank to WM, but I think they’re reluctant to give up the PPV.

Any chance we can get Wyatts vs League of Nations at Wrestlemania. Keeps both mid card factions happy and leaves more suitable and fitting opponents for Brock.

Not the worst idea, but it’s two heel factions so I don’t see the point. Plus you’re getting Brock-Bray, you might as well accept it now.

Where do you think Reigns’ recent title run matches against of the less successful ones through history.

The ones that popped in my head were:

Any of Del Rio’s title runs.

Hard to compare because this wasn’t intended as his big coronation, it was just a stopgap to get to HHH so we get back to Reigns again. In a sense, Reigns was his own transitional champion because they’re just completely out of ideas right now.

Diesel was intended to be the next Hogan and it obviously didn’t happen, but Reigns hasn’t had that kind of shot with the belt yet, so that’s not a fair one. Miz was supposed to be a top guy but they completely gave up on him literally two weeks in, whereas they’re NEVER giving up on Reigns.  Sid was always a transitional guy and no one thought he was going to stick around as champion, but it’s a fairly close comparison in terms of business, I think, especially because ratings hit the same levels with Reigns as champion.  Big Show was just a deal where it was a make-good to fans with Austin injured, no comparison there.  Sheamus in ’10 and Del Rio are actually good comparisons, I think, because they were trying to make new stars and failed spectacularly before going back to the old stars again.

One last one about AJ to wrap it up:

Question about AJ Styles – is he assumed to be “WWE-style” ready, which is why he’s skipping the usual NXT stay? Any particular reason for this or did AJ have some input into the decision? I see Samoa Joe doing his thing down in NXT and I haven’t a clue as to his long term plans but with AJ, it sure looks like he’ll be on the main roster with a ready made feud with KO and perhaps the possibility of a fantastic triple threat with Zayn thrown in.

I think they’re breaking a lot of their own rules because they need AJ to be a big star, whereas they only wanted Joe for NXT as a part of HHH’s plan to create his own ROH. AJ was the right guy in the right place at the right time, essentially.  Not only that, but they seemingly let him and Jericho call the match in the ring on RAW.  The real interesting test will be when Nakamura shows up, because they’re paying him a shitload of money, too.

Hey, if you want to read 2 or 3 e-mail answers every morning, make sure to check out www.blogofdoom.com!