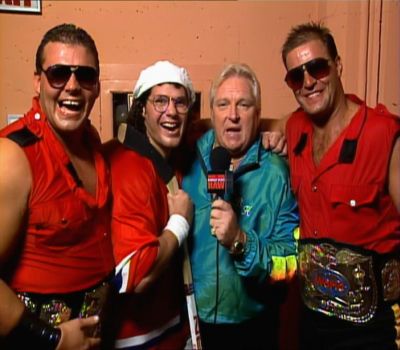 1) Scott Steiner defeats Pierre with a Frankensteiner at 12:43

Scott: Coming off last week’s tag title upset, the Steiners were promised a rematch for the tag titles if Scotty can knock off Pierre here to open the show. They showed portions of last week’s title match and how the Province of Quebec rules screwed the Steiners in the end. They booked that pretty poorly as Rick was DQ’d with the hockey stick, but he should have got DQ’d for a piledriver or something. So the two powerhouse guys on the teams face off here, and if Scott wins his team gets the title shot. Scott rocking the Michigan colors on his singlet, something you really didn’t see too often. Scott dominates early and chases Pierre and Johnny Polo off until after the break when they return with Jacques, which brings out Rick Steiner. All four men are jawjacking with each other which gives Pierre a chance to attack Scott from behind. Pierre takes control now while Rick is holding Jacques off with a chair, but not a steel chair. Rather it’s one of those banquet chairs, which looked pretty funny. The match turns into a fun back and forth battle of power guys while Bobby Heenan is coughing and sneezing and asking if Themis the Raw card girl can rub Vick’s Vap-O-Rub on his chest. Pretty funny stuff. Finally Scott recovers late, hits the Frankensteiner and gets the victory. So conceivably the Steiners should get their title shot at some point. That was a fun match with some great power moves and fun character work. Grade: **1/2

JT: We are on tape this week but are set up for a pretty big show because right out of the gate we have a key singles bout between Scott Steiner and Pierre. The Quebecers stole the Tag Team Titles a week ago but if Scott can get the duke here tonight, the Steiners will be granted a rematch. This is suddenly a pretty good feud that really cropped up out of nowhere. Scott was laser focused as he came out and in complete contrast, Pierre and Johnny Polo exuded great cockiness while sauntering out to their beautiful theme music. Scott threw some heavy bombs to open things up, slugging Pierre down and then hitting a clothesline of the top rope. In a nice touch, Vince mentions how that would have been a DQ a week ago but is back to being legal here. It happens again when Scott chucks Pierre over the top to the floor. And then a third time when Scott hits a piledriver for a near fall. Cool storytelling. Scott was on point, grabbing an Indian death lock with a bridge into a chinlock. He would release that and continue to work over Pierre, including a sweet belly to belly throw off the top rope. Pierre rolled to the floor to regroup with Polo but Scott followed him out and chased him off. After a break, Pierre returned, but now Jacques was with him as well. That drew out Rick Steiner to even the sides up and after resetting things, Pierre was all to clobber Scott from behind to finally take over control. Pierre worked the neck and upper back, using his weight advantage to aid in his offense and picking up a near fall. In a good running bit here, Bobby Heenan is battling a cold thanks to Doink dousing him with water last week. Scott would grab a flash sunset flip but Polo ran interference to prevent the referee from counting. Pierre kept leaning on Steiner, wearing him down with a chinlock in between brief spurts of Steiner offense. Scott would punch his way back into the match, followed by a clothesline and a double underhook suplex. A moment later, Scott hit a Frankensteiner and the lights went out on Pierre. Looks like the Steiners will be getting that rematch after all. Pretty good match here, long and hard hitting with both guys getting some nice shine. This feud has been an unexpected boon to the division. Grade: **1/2

Scott: Perhaps one of the coolest names in jobber history takes a beating from the Beast from Asbury Park. The match is nothing, but during the match we have another conversation with Crush on the phone, and this time he says pretty clear he will never talk to Randy Savage again. So the storyline is pretty clear now, after the first phone call was caused by “technical problems”. Bigelow wins easily but it’s the Crush/Savage situation that takes center stage here. Grade: DUD

JT: We haven’t seen Bam Bam Bigelow in a few weeks but he is back in the house here tonight, coming off a tough loss in a six man tag at SummerSlam. He doesn’t have much of a feud brewing at the moment as his issues with Tatanka seem to be tapering off. Bigelow cracks Magille with a dropkick to open but Laverne would dodge a second one and actually land a few shots. Magille kept moving, dodging Bigelow’s splash in the corner but then crashing and burning on a missed dropkick of his own. As Bigelow started to pound Magille, Vince McMahon brought Crush into commentary via the phone for a second straight week. Crush talks about his rehab and promises to be back very soon. Vince transitions the call to Randy Savage, who puts Crush over, but Crush ignores Savage and then tells McMahon he will never speak to Savage again. Interesting. Heenan plainly states Crush just wants nothing to do with Savage and Vince agrees but Macho has zero explanation or answer for what is going on. Once the call ends, Bigelow stops eating up time and gets more aggressive on offense. Vince plugs tonight’s Silk Stalkings as Magille makes another comeback. That gets quickly snuffed out as Bigelow catches him coming off the middle rope and rams him into the corner. Bigelow eventually finishes him with a senton bomb. This was a weird squash as Magille got a decent amount of offense in. Bigelow usually looks stronger in these but the really focus was on Crush’s phone call anyway. Grade: DUD

*** We see clips of Doink dousing Bobby Heenan with water last week. Vince McMahon then brings out Bret Hart for a chat. Vince recaps his SummerSlam experience with Doink and Jerry Lawler and everything that went down with the entire Hart Family. Hart disputes anyone that calls Lawler the King of the WWF as he hasn’t really beaten anyone. He also talks about his family’s honor meaning more than any crown and he promises that Lawler won’t even have a head to wear a crown on when he finishes with him. ***

Scott: After his almost win against Shawn Michaels at SummerSllam, it seems like Mr. Perfect is kind of in limbo. Perhaps he is due a World Title shot with Yokozuna, or something else. Bobby is debating about Joe Fowler on All American Wrestling, as Mean Gene was on his way out the door. Perhaps the time is coming when Vince is realizing his talent has to start getting a little younger as the roster is starting to get younger. Plus some of these older commentators and interviewers want a lighter schedule. Perfect wins easily. Grade: DUD

JT: For the second straight week, Mr. Perfect is in the house for a showcase bout. As Perfect comes out, Heenan trashes his new All American co-host Joe Fowler. Don’t you dare disparage the voice of the Screaming Eagles! Perfect smacks Mike Bell around before cracking him with a dropkick. Vince pushes Perfect’s issue with Diesel as the match edges along. Perfect works pretty stiff here, popping Bell in the face with two hard punches and then eventually polishes him off with the Perfectplex for yet another Raw win. Grade: DUD

*** Ludvig Borga roams some random countryside and trash talks America, mixing in a rhyme amidst the disdain. Bobby Heenan then heads over to a couple sitting front row and triggers a marriage proposal. He also eats their popcorn and hands her his dirty tissues before making a Chinese food joke regarding the Asian woman. ***

Scott: Before the match Bobby went to ringside and two people got engaged while he ate their popcorn. IRS wants to bait Razor Ramon into a match but that doesn’t happen. Well until Razor Ramon comes out and distracts IRS, which gives PJ Walker the chance to roll him up and get the upset victory. IRS is beside himself and is being held back while Razor is laughing at him. This really wasn’t a match at all but a chance for Razor to get the upper hand on Irwin. Grade: DUD

JT: After Razor Ramon mowed down down Ted DiBiase at SummerSlam, his old partner IRS looks to be out for revenge. Before his match here, be tries to goad Ramon into coming down for a match but then just says he will  take care of PJ Walker, tax cheat, instead. IRS aggressive attacks Walker, tossing him to the floor and then kicking him violently before spiking him into the stairs. Back inside, IRS kept the attack on but as he did, Razor Ramon did show up at ringside. IRS would catch eyes and as they jawed, Walker snuck over and rolled IRS up for the huge upset win. The mind games and major upsets continue to flow in this feud. The match was nothing but this is definitely a memorable moment in Raw’s first year. Grade: 1/2*

*** Bobby Heenan heads backstage to interview the Quebecers and Johnny Polo. Polo says the Quebecers will defends their titles next week but it won’t be against the Steiners. There are other great teams that deserve title shots and one of them will get a crack next week instead. ***

Scott: Other than the opener and the Bobby stuff with the couple getting married, this was a pretty boring show. It’s evident some things around WWF are changing, as Mean Gene left the company at this point and was replaced on All American by Joe Fowler. I need to look up who Laverne Magille is. He seems like somebody I should know. We are in between PPVs so some of these shows are a little boring. We get some big news and a new Raw venue when next week comes, which is where the real action begins. Final Grade: D+

JT: We follow up a pretty strong outing a week ago with a decent enough episode this week. The opening match was solid and that was joined by the memorable PJ Walker win and progression in the Crush/Savage storyline. Mix in some fun commentary and a couple of decent enough squashes and this was another quick watch. The Heenan stuff was funny too, both his sickness and the proposal. Quick bits like that help the show chug along. Next week is shaping up to be another big card as well as they are doing a nice job of hyping and building week to week and progressing things along by this point. Final Grade: C