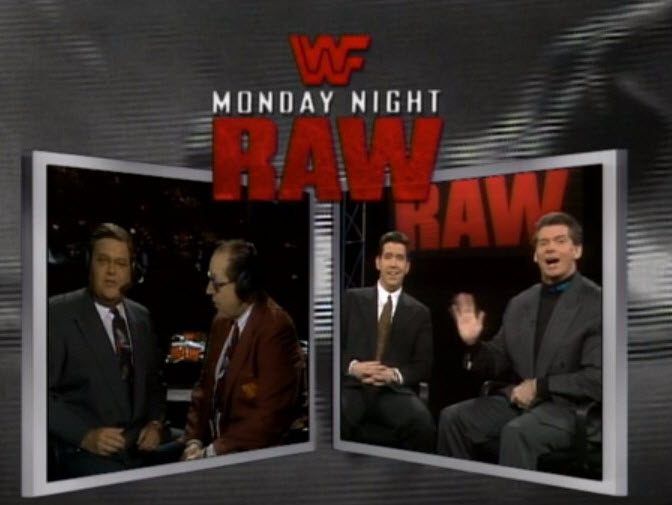 *** Jim Ross and Gorilla Monsoon welcome us to the arena and set the stage for the big No Holds Barred battle between the Hart Brothers that will go down tonight. They then welcome in Vince McMahon and Todd Pettengill from the WWF Studios and they discuss what else is to come during this hour. McMahon says this will be the greatest WrestleMania of all and Pettengill talks about what makes Mania so great. We then get a recap and discussion of the feud between Diesel and Shawn Michaels. Pettengill also informs us fans can discuss the match on Prodigy and on Sunday there will be a virtual match prior to WrestleMania. ***

*** After a break, McMahon and Pettengill discuss the Lawrence Taylor vs. Bam Bam Bigelow match, saying they guarantee they will deliver and live up to the hype, unlike many Super Bowls. We then get a video recap of the feud followed by more in depth discussion in the studio. Stephanie Wiand then plugs the WrestleMania weekend Fan Festival in Hartford. ***

*** When we return from commercial, Jim Ross chats with Bob Backlund backstage and they talk about how close he came to becoming Intercontinental Title. Ross asks Backlund if he will get involved in tonight’s match. Backlund says he will trigger a cascade of chemical reactions in Bret Hart’s mind that will prevent him from performing or doing his duty in the wing. He may procure the CFCW tonight or in six days. Ross then cuts Backlund off. Back in the studio, Pettengill takes us through a video recap of the feud between Razor Ramon and Jeff Jarrett. ***

*** As we head back into the studio, McMahon compares himself and Pettengill to Beavis & Butthead before the two broke down the feud between Undertaker and Ted DiBiase, which has led to Undertaker facing King Kong Bundy on Sunday. We also hear comments from the Deadman and Paul Bearer. Jim Ross then chats with Bret Hart about tonight’s big main event. He promises to kick his brother’s butt and make him sorry he ever started this feud. He then issues a warning to Bob Backlund that he has payback coming in Hartford as well. ***

*** McMahon and Pettengill discuss all of Bret Hart’s issues, including problems with Owen Hart, Bob Backlund and Hakushi. Pettengill thinks Hart will cage his rage and take it all out on his brother. We then head to the ring. ***

1) Bret Hart defeats Owen Hart in a No Holds Barred Match via submission with the Sharpshooter at 12:00

Fun Fact: After almost a year and a half, the Hart brothers feud comes to an end in this match tonight. They will continue to battle each other in house show matches, but this will be the last one-on-one match the two will have on TV in this feud.

Scott: This is a forgotten jewel of a match since it’s on a studio show previewing WrestleMania XI. Sunday Night Slam was the night before and featured a bevy of matches, so on this night they chose to have studio presence and Jim Ross and Gorilla would do a match while sitting in front of a green screen. However this is anything but a throwaway match, as these two brothers have been battling for over a full year. After Bret’s title defense at SummerSlam and a great battle on Action Zone (plus house show title defenses) we thought that this feud was settled. Then Owen cost Bret the title at Survivor Series and again at the Royal Rumble so Bret needed to end this war before his I Quit match with Backlund on April 2. To be honest having Gorilla & Ross doing this match kind of fits because it’s very technical, which fits Ross, and for Gorilla it’s calling a bout for one of his favorite guys in the company. The match is a fun brawl with lots of strikes and submissions. Owen goes for a top rope move but Bret steps aside and slingshots Owen into an exposed turnbuckle. Bret ratchets the Sharpshooter up and gets the victory, preparing for Backlund. It’s the lone match on this show, and it’s a fun one. Grade: **½

JT: Well here we are, just six days from WrestleMania and we have but one match for you on this special edition of Monday Night Raw and it is a big one. The battle between the Hart Brothers has been roaring hot for 15 months and this will finally be their last showdown. No titles on the line here, just pride. Both brothers have bigger fish to fry at Mania but their anger and hatred drew them back into one another on the eve of the biggest show of the year. Jim Ross and Gorilla Monsoon have the call on this one and Owen makes his way out first, smirk on his face as always, to a chorus of boos. The Hitman marched out next, laser focused and ready to finally bury this feud. Owen attacks his brother at the bell and hammers away in the corner but Bret reverses a whip and sends Owen careening hard into the corner. Bret pummels away at Owen, unloading a rough attack with fire in his eyes. Owen tried to escape but Bret was all over him, pounding his back and dropping him with a DDT and followed by a leg drop. Bret pitched Owen outside and followed out where he kept pouring it on, punishing his brother using the barricade and ring steps. The fight went backstage briefly before they came back to ringside where Bret slammed Owen hard to the floor. Back inside, Bret was in complete control, picking his brother apart with ease. Owen finally found a seam and took control away from the Hitman and he did what he could to buy a breather, raking the eyes and punching and head butting away. The crowd did what they could to rally the Hitman as Owen pelted him with an enzguri for two. Owen took the fight outside and slung his brother hard into the steps and then twice into the barricade.

After a break, Owen had Bret in a chinlock back in the ring, and Ross was pondering if these guys were going to be able to heal in time for Sunday. Bret snuck in a surprise crucifix for a close near fall but Owen popped up and went right back to work, hanging the Hitman in the Tree of Woe and kicking away. The referee unhooks the Hitman, pissing off Gorilla for getting involved, as Owen removes a turnbuckle pad. That backfired as Bret slammed Owen’s face into the exposed steel and then went to work on offense with his usual arsenal. The Hitman stuffed Owen with a hard piledriver for two as Gorilla started getting critical of Bret making slight errors in judgment. Owen blocked the Sharpshooter with an eye gouge and then shot Bret hard into the exposed corner for two. Owen hit the top rope but whiffed on a missile dropkick and Bret took advantage, slingshotting his brother into the exposed steel. A moment later, Bret hooked in the Sharpshooter for the hard fought win. After the bell, Bret refused to release the hold as Ross said no matter who the mystery partner is at Mania, Owen may be in some deep trouble. This was a very good match but they could have probably done without the stipulation as it really didn’t come into play. If you set that gimmick up, you assume we will get a bit more violence. That aside, the brothers really laid into each other with some hard hitting strikes and you could feel the anger and hatred on both ends. This has been a great feud across the board, featuring memorable moments and matches along the way but it was certainly time to let each guy go their own way for a while. And honestly while it helped Owen grow into a main event level star, he has lost to Bret every time so at this point it is diminishing returns anyway. Fun bout on this one match show. Grade: ***

*** Back in the studio, McMahon and Pettengill give another pitch for WrestleMania and refresh us on how to order pay-per-view. We then hear from Jonathan Taylor Thomas, who has had a big year but is very excited to be a guest interviewer at WrestleMania. We return to the studio for some final thoughts and comments, including a visit with the Million Dollar Corporation.

Scott: This was in essence a throwaway show with one awesome match. We really had the hard sell for WrestleMania XI last night during Sunday Night Slam, but this is nothing more than an extra hour that was needed to fill on USA Network. This WrestleMania seems a little flat other than the top three matches they’re promoting. Even the Ramon/Jarrett match seems flat even though Jarrett has been a great heel IC Champion and Razor is crazy over. I say we just head right to Hartford and see how this plays out. I’ll grade this high because the one match we had was one of the best TV matches in quite a while. However, I’m done with builds and am ready for the show! Final Grade: B+

JT: This was a breezy watch with some real good hard selling for WrestleMania, one last push for buys. We only had one match tonight and it was a very good one, the culmination of the feud between the Hart Brothers. Bret gets the hard fought win and looks to continue his revenge tour on Sunday by finally finishing off Bob Backlund as well. Vince and Todd did a nice job in the studio, succinctly wrapping up all of the hype and build and putting over the top matches of the card. We also had some solid, quick hit interviews and promos mixed in as well. Nothing overstayed its welcome at all on this show. I liked this format and it was a good concept to follow up the Sunday Night Slam with an hour of pure hype. See you in Hartford! Final Grade: B