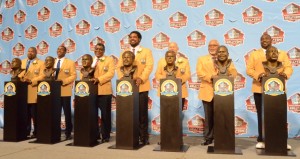 It was a usual beautiful early August Saturday night in Canton, Ohio on August 3rd, for the 50th annual Pro Football Hall of Fame Inductions Ceremony. This year’s festivities featured a record 122 returning, of the then 162 living members (iconic Baltimore Colt Art Donovan, who was not among the attendees, passed on the following day), to help celebrate their ranks growing to 280 strong.

First up was the first of the three first ballot Hall of Famers to be inducted in the Class of 2013, Jonathan Ogden. The legendary Baltimore Ravens Defensive Tackle was inducted by the man who made him the very first draft pick in franchise history, GM, and fellow Hall of Famer, Ozzie Newsome.

Up next was Dave Robinson, a Senior Committee selection who was a Linebacker for the Green Bay Packers from 1963-1972, and also played with the Washington Redskins from 1973-1974. Robinson becomes the 12th member of the iconic Vince Lombardi era Packers to be enshrined in Canton

Robinson, who was a pioneer of Southern college bowls during his playing days at Penn State referenced the legendary Coach Lombardi, and gave much love to Cheesehead Nation. He was inducted by his son, David.

The next to be inducted was another latest member of a dynasty era, though on the back end, Larry Allen, who was the second first ballot inductee of the class. He was a legendary offensive lineman for the Dallas Cowboys from 1994-2005, and moved on to the San Francisco 49ers to wrap up his career in 2006-2007. The owner and GM of the Cowboys, Jerry Jones was his presenter.

Presented by a great defensive end on his Giant squads, George Martin, Parcells’ speech was the longest of the night, clocking in at 20 minutes. But it was an effective speech as he shared stories and thoughts on coaching.

Next up was the second, and final Senior Committee inductee, Curley Culp who was a defensive end with the Kansas City Chiefs from 1968-1974, Houston Oilers from 1974-1980 and finally the Detroit Lions from 1980-1981. He was presented by his son Chad.

The final First Ballot inductee, Warren Sapp, was next up. The legendary defensive tackle for the Tampa Bay Buccaneers (1995-2003) and Oakland Raiders (2004-2007) was presented by his daughter Mercedes. Sapp held it together for most of his speech, which probably amazed the NFL Network Twitter followers whom overwhelmingly thought the long time analyst on Total Access would break down often!

And finally Cris Carter ended his six year wait, as for some reason voters tend to make wide receivers wait long periods before eventual enshrinement, ended the night with a very stirring speech. The Ohio native was inducted by his son, Duron, whose birth following the end of Carter’s stay in Philadelphia (1987-1989) was major factor for tackling personal demons and reinvigorating his career with the Minnesota Vikings (1990-2001). Carter also played with the Miami Dolphins in the 2002 season. 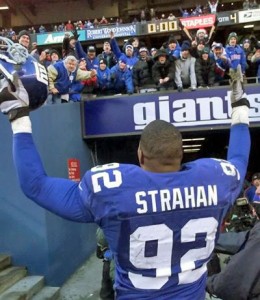 Looking ahead to the 2014 induction ceremony, will the wait be over for Giant linebacker Michael Strahan, who missed the cut in his first year on the ballot this past year? Also Tim Brown (fifth year) and Andre Reed (eighth year) are the current long time waiting wide receivers on the outside looking in. Others from last year’s finalists include Jerome Bettis, Eddie DeBartolo, Jr., Kevin Green, Charles Hayley, Art Modell, Will Shields and Aeneas Williams.

Also in the mix are the Senior Committee finalists (careers that ended at least 25 years ago), Ray Guy, legendary punter with the Oakland Raiders of the 1970s, and Claude Humphrey, defensive end, primarily for the Atlanta Falcons in the 1970s.

The announcement for the class will be made, as usual, the day before the Super Bowl. This year, the announcement will be held on February 1st as part of the New York/New Jersey Super Bowl XLVIII. And once again Fawcett Stadium will host the 2014 induction ceremony on Saturday August 2nd.

For more PTBN coverage of the previous Pro Football Hall of Fame ceremony, check out Matt’s behind the scenes report.