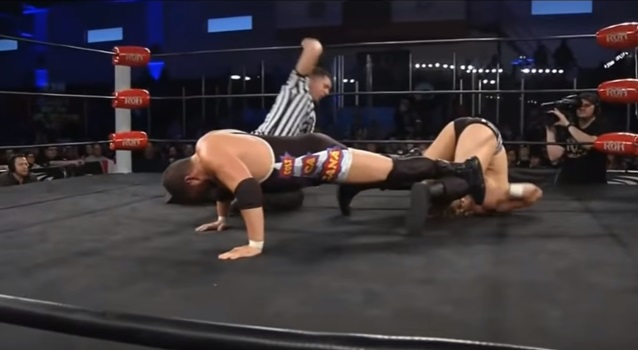 We open with a video montage setting up the main event – the blow-off to Dijak vs. Lethal, a feud that started all the way back at the Vegas tapings in February.

KK makes note early that Sydal was a little miffed that he was passed over by Okada and CHAOS for Will Ospreay. Could this be the seed for the rumored Ospreay appearance later this summer, as Sydal would be a great choice. Even sans title and appearing in Toronto yearly now, Okada gets such a superstar reaction.

Even though Sydal is a junior in NJPW terms, Okada plays this one real close and I thought he made Sydal look real competitive. Early on both guys have each other scouted and you even see Okada abort a drop kick when he sees Sydal has the ropes. Double knees by Sydal for a semi-close fall (good late kickout by Okada), Okada rolls through a guillotine and dead lifts Sydal into a neckbreaker. Reverse rana sets up the 450 but the knees are up. Okada picks up Sydal for the tombstone but he wriggles out, only to eat a drop kick and the Rainmaker. I really liked the layout of this match, especially on second and third watches.

Bullet Club backstage bit questioning (as many) the Jay Briscoe / Jay Lethal Best in the World main event. Will they interfere in a second straight PPV finish? Please, no.

Back from a break and Silas cuts a promo on ACH and the ROH coloring book, stating that his 7 year-old son is more of a man than ACH.

Colt exceeded my modest expectations at Global Wars and it’s a cool little match-up here given the Bullet Club story going on and how it tied into the end of Global Wars. Colt is super over here. It’s great to have Page back as a heel. This turn was a fine example of switching gears when something wasn’t working. They tried with the Whitmer feud, but the babyface thing just didn’t catch on. Onto the match,  while it doesn’t always look great, I dug the reversal sequence that led to Page’s running shooting star press to Colt outside.

Cabana comes back “using his rear as an offense weapon” (per KK), and this is a bit more deliberate than what we normally see on ROH TV. Never totally felt like both guys were on the same page (pun not intended but kinda, i don’t know). Lethal played better to Colt’s weaknesses than Page did, but this wasn’t bad or anything. Colt rattles off some punches and a flying hip into the corner. Big lariat by Page back in for two. Dropkick to the gut on a charging Page, right into the Alligator Roll and Colt wins. Bit of an upset at first blush, but this works to help solidify Cabana at the top of the card. The Guerillas of Destiny come down and Page grabs the noose before we go to break (with the idea being this wouldn’t be allowed on TV).

All Night Express debuts their “Make Wrestling Great Again” vignettes and they run down Cheeseburger and call Liger washed up. It may seem like low-lying fruit, but the ANX have been pretty convincing this year. They  come across absolutely believing what they’re saying, which is great.

BJ Whitmer heads out to cut a promo on Steve Corino and our friend Steve comes through the crowd before security holds him back.

Feels like this is a new entrance and music for Dijak here, who of course is joined by Prince Nana. Given the animosity, Lethal wastes no time attacking – no intros or anything here. Lethal is being cheered here, which makes sense given the Nana thing for Dijak and everything with Truth. Dijak TKO’s Lethal out of the ring early and hits a big overhead throw to the mat. Lethal slams Dijak into the barrier (and a chair) outside. We get another instance of Dijak somersaulting himself into the guardrail. Lethal kind of embraces this face dynamic, chasing Nana around the ring until he gets his hands on him in the ring. Crowd chants “This is Awesome.” Seems pretty early for that – wondering if that’s one of the instances of piping the crowd that’s been reported. Lethal starts his dives, with the crowd chating “one more time”, only for Dijak to dodge and send Lethal sprawling. Lethal was totally in fired up baby face mode there. Dijak takes off with his twisting splash, which Lethal covers for and quickly gets into position, and we head to commercial.

We get a clip from the break of both Dijak and Nana taunting Lethal with the belt. Lethal is selling the knee here now and fights back, with the crowd confidently behind him. Dijak catches Lethal off the top rope and hits an overhead suplex for two. Dijak just taunts Lethal, slapping his head repeatedly, before they slug it out. Dijak reverses the lethal combination into a side kick but Lethal fires off a german suplex that Dijak bounces up from immediately. Spinning boot knocks Lethal down (same as what he did to Truth in a good callback, well noted by Nigel). Lethal combination now hits, although I would have saved the earlier reversal for here as it would have been a great cutoff to Lethal’s hope spot. Hail to the King off the top but Dijak grabs him for a chokeslam. Lethal rolls through and essentially spikes Dijak, which gets two. Another kick and punch combo by Dijak and he goes for Feast Your Eyes, but Lethal slips out, avoids a rushed side kick by Dijak BECAUSE he missed his finish (which I totally dug) and then Lethal hits his own super kick.

Lethal Injection is countered and Dijak powerbombs him for two. Moonsault by Dijak misses, Nana gets on the apron and it kind of takes forever for Hendrix to get him off. Lethal at least looks back a couple times to not look like a complete goof. During this cluster, Omega and the Bucks run out and seemingly try to kick Lethal, but he ducks and Dijak takes two super kicks. Lethal shoves them out of the ring, and hits the Lethal Injection to win. Awesome main event, somewhat sullied by that weird BC spot and this being a really odd way for the guy who wrestles the whole match as a babyface to win – although to be fair, Lethal’s character will always take an edge. Dijak looked like the man here. With Nana drawing heat himself, this combo can be high up the heel foodchain on the go-forward.

The G.O.D. are out again to attack Lethal (putting to bed my brief thought that Lethal was in cahoots) but this time the Briscoes make the save. “One more time”  chant during the big Jay/Jay faceoff, although you don’t see anyone in the actual crowd chanting that. That was glaringly bad – if the crowds are tepid, then they need to look into not taping four TV shows in a night. Otherwise, let KK do his job if things are quiet – he does a fine job getting over the moments they want, with the right kind of energy and enthusiasm.

Final thoughts: a real solid episode of graps here, with a number of vignettes to push other stories along. One of the better episodes of the year.