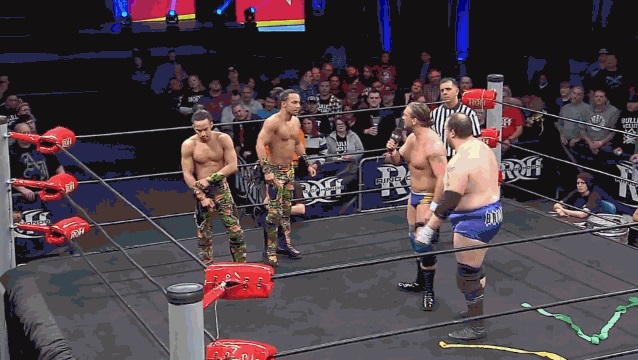 ROH’s 14th Anniversary show is in the books – be sure to check out Dave’s review of the show (obvious warning: spoilers). As always, you can find all our great ROH content by clicking on the ROH Nation tag.

One of the nice and refreshing things about ROH TV is that they’re not always building to the next PPV. Yet, storylines move forward outside of the PPV so you’re not missing anything here if you didn’t see the 14th Anniversary show.

Silas Young and The Beer City Bruiser vs. The Boys

Dalton Castle sneak attacks before the Boys make their entrance but security hauls him off. “Dalton’s Boys” chant from the crowd and Silas cuts a fantastic pre-match promo, culminating in stating he would quit the business if they lost this match. The whole setup here should get a “This is wrestling” chant as it is pro wrestling to a tee.

The Boys struggle to move the Bruiser, but they get a double team jawbreaker which stuns him enough for one to go up top, only to be met by the Bruiser and a big fall-away slam. Silas tags in and is really nonchalant, just kicking at one of the boys as he tries to get up. This is eventually countered into a bulldog to set up a hot tag, but there just wasn’t enough of Silas kicking ass to really build to that as a HUGE counter. Crowd isn’t as into the Boys as Mr. Wrestling III claims, but things pick up off the hot tag, including a swinging DDT out of the corner onto the Bruiser. Silas clears house a bit and sets the Bruiser up for the Milwaukee’s Best splash (KK with a great dismissive “What is the Bruiser thinking” line also) but it’s countered into what looks like a missed RKO. And the camera angle they used did no favors to this car crash. Both Boys cover and we get a pretty hot two count. I bought that as the finish.

Both Boys crash and burn to the outside with big dives. Facebuster to Silas and the Boys try another combo where one climbs onto the others’ shoulders, which results in a sloppy leg drop. That gets two before Silas and the Bruiser just eradicate them, culminating with a cannonball splash on both in the corner. That gets the three, but heckuva fun match for the Boys. Castle attacks again post-match but is flattened by the Bruiser.

Action Ortiz forgot to not wear that awful ring gear. Ortiz hits a big somersault dive to the outside; sheesh he’s a big guy too. Fury works as the experienced, scrappy heel here. Chop block on the big guy, and eventually a low blow kick as he’s being punched down, setting up a pop-up powerbomb and Fury advances to the final. Outside the dive this was largely forgettable, Ortiz had to be waived by the ref to go for a pin and looked pretty winded. Fury provides the best chance to have a good match in the tournament final given the bracket.

Punisher Martinez was last seen murdering Colby Corino with that Last Ride powerbomb bump onto the apron. Martinez is huge, a good foot and 100 lbs bigger than Rush. Let’s see how they do with the dynamic. Martinez shrugs off everything to start, any kind of roll-up or kick is just blocked or he grabs Rush’s limb. Rush dodges all of Punisher’s strikes and we have a pretty prolonged stalemate, which gets cheers from the crowd. Martinez even catches Rush diving through the ropes and they dance around another apron bump but Rush is able to kick away and then hit a big corkscrew from the top. Rush seizes a little window here to get in some offense before Martinez is back to catching his stuff and giving him a jawbreaker and drops the back of his head on his knee. Hands free tope over the turnbuckle by Martinez (!) after Rush escaped to the outside. After a kickout off a big spin kick, Punisher takes him up top for a chokeslam, which gets a “Please don’t die!” chant. Rush reverses into that Spanish fly type thing (scientific term) and gets the win. Great big guy / little guy story here. I kind of question past precedent (Dijak, for example, had to sell like crazy for Ferrara last year) with this kind of dynamic in ROH but man did they pull it off. This should have been the final as there’s no way anyone is buying Fury over Rush. I’d sign both of these guys immediately. 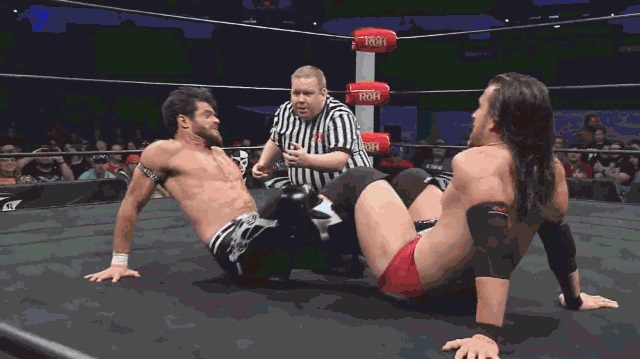 Cole cut an earlier backstage bit talking about beating Sydal before when Cole was hut and now he’s 100% and the best Adam Cole has ever been. I was fully prepared to go on a little fantasy booking bit with Sydal as I think he’d be a good foil for Lethal and the title, but then ROH went and announced he’d be facing Lethal at the 3/12 Philly show for said title. He’s a great sympathetic underdog there story-wise, but looks like just a one-off.

Feeling out after the code of honor. Sydal with a fast rana off the ropes on Cole, which segues into cattle mutilation with Cole biting the hand to escape. Cole takes over after bouncing Sydal’s head off the apron to the outside. Cole messes with the fans and then in the ring teases a move off the ropes to a seated Sydal but ends up just applying a headlock. I just saw a clip of Kevin Owens doing the same thing a week or so ago. More good heeling.

We come back from a break to Sydal making his comeback. Standing shoot star press from Sydal and a kick to the head sends Cole to the outside. All the televised transitions here have been real smooth. Sydal goes for the baseball slide but Cole grabs him in a wheel barrow and german suplexes him on the apron (!). This gets two. Sydal springboards off the turnbuckle into a codebreaker by Cole, who then hits the shining wizard for two. Standing rana in the corner sends Cole into the middle of the ring for a decent near fall. Charge by Sydal misses and he bumps his knee again and Cole goes right into the figure-four.

Sydal flips it over and sells the damage in a nice touch. In the corner Cole FAKES a super kick, gets Sydal to block high, and then kicks him in the injured knee. Maybe the spot of the show, and that’s saying something with all the dives and hands-free topes. Loved it. Real super kick now, followed by a Sydal knee to Cole’s head, followed by two more super kicks before Sydal reverses out of a suplex and hits a reverse rana (or the big move in the Sasha/Bayley Brooklyn match). He goes up for the Shooting Star Press, HITS IT, and wins. Big win for Sydal and plays into that 3/12 match with Lethal as this was a strong opponent to go over.