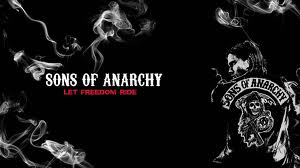 “Ridin’ through this world…all alone.  God takes your soul…you’re on your own.”

When that theme first played on FX back on Tuesday September 3, 2008 I was curious as to what creator Kurt Sutter had up his sleeve this time.  Now, “Sons of Anarchy” is the most watched show in FX’s history and another victory for the off-kilter former drug addict.  Sutter had established himself as one of the top show creators in the industry when he wrote and invented (along with Shawn Ryan) FX’s signature show of the early 2000’s, “The Shield”.  The story of Los Angeles detectives with questionable moral fiber ran from 2002-2008. “The Shield” was at the time one of the best shows on television and clearly the standard-bearer for Fox’s cable network.  Sutter’s first brain child, along with “Nip/Tuck” and “Rescue Me” made FX one of the most-watched networks on cable.  FX also pushed the envelope of what was considered risqué or colorful in terms of language that network television can’t touch.  Plenty of sex (without nudity, except for the occasional ass) and a boatload of vulgarity epitomized the reality and the grittiness that Sutter’s shows emulated.  By the show’s third season, SOA averaged almost five million viewers and surpassed any FX show before it as the most watched in the network’s history.

The story was simple:  A group of Vietnam veterans that were anti-establishment in the late-1960’s that lived in a fictional town in central California called Charming started a motorcycle club called Sons of Anarchy motorcycle club Redwood Original (SAMCRO).  They were a typical bike gang that protected their turf and also kept the peace in their sleepy hamlet tucked between Big Sir and Eureka.  As time progressed the club joined into a relationship with the Irish Republican Army (IRA) to ship guns and ammunition overseas for cash.  John Teller the founder of the group wasn’t too keen on the club becoming a “criminal” element and was going to end the relationship.  He mysteriously died in 1993 when he was hit by a truck due to a bike malfunction.  His wife Gemma married the youngest of the club’s members Clay Morrow and Clay went full bore into selling guns.  Gemma and John’s son Jackson, or “Jax” for short eventually became the club’s VP and that’s how the show began.

I’m no biker by any extent, but when I watched the commercials before the premiere I was curious.  I had watched The Shield religiously as well as Rescue Me so I knew the kind of shows FX aired. So that September, 5 years ago I watched the pilot and from that point I was hooked.  Sutter made this show more than just a show about gun-selling bikers in a sleepy town.  The blueprint is similar to how David Chase sculpted “The Sopranos”.  The show is more than just a microscopic look at how a motorcycle gang (or in the Sopranos case, the Mafia) works.  That would be dull.  This is about the characters, and how they battle their own world and the world they live in.  Now just like any of the FX shows there are no real “protagonists” per se, but more like the most likable antagonists.  In the vein of Vic Mackey in The Shield, Tommy Gavin in Rescue Me, or Tony Soprano himself, Jax Teller is the most likable of the bad guys.  Mostly because even though he is VP in a gang that sells guns, he still has the soul of his father in him.  John Teller (in transcripts revealed in the first season) never wanted the club to be involved in “material goods”.  It was all about freedom from authority and the Vietnam War.  The implications that Clay and Gemma were involved in the “accident” that killed him were the underlying tensions that would explode in Season 4.  I won’t spoil anything; you can watch the show yourself.  I want you to be just as surprised as I was watching for the first time.

The reason this show is incredible is not only the action and dialogue, but the characters.  All of them have so many layers that at the beginning are unpeeled.  As the show progresses you become a part of SAMCRO almost, following all the demons and ghosts in the closet that little by little come out and interfere with everyone else.  Jax is the family man on the show, with two kids and his wife Tara, high school sweethearts.  Tara was very anti-SAMCRO when the season began but little by little her love for Jax started to spill into her responsibility to the club, which threatened Gemma.  Gemma is the evil “mother hen”, a Machiavellian who was a mistress of psychological warfare.  She was the Queen Bee for the first few seasons but her role changed thanks to Tara’s growing influence.  It’s a show you really have to pay attention to, like most of the FX shows.  Miss the first half of the first season and you may as well wait till Netflix has it.

The 90’s was the decade of the sitcom, led by Seinfeld and Friends.  When the 2000’s dawned, FX became the network that decided to change the mood of television to more serious overtones.  The parent network FOX did a similar turn (after becoming an established network in the 90’s with Married with Children and of course The Simpsons) by starting “24” in 2001.  The hourly drama with the awesome protagonist Jack Bauer became one of the best shows of all time.  Rupert Murdoch’s cable division decided to follow suit with The Shield.  Now here we are.  Tonight (Tuesday) Sons of Anarchy begins its sixth season with quite a bit of fanfare as the season five finale brought more twists and turns than ever before.  Sutter has alluded that next season’s seventh will be the last.  If you haven’t seen the show, I recommend watching season one on Netflix.  If you like it, wait until next year when the show officially ends and buy the eventual Blu-Ray set when it comes out.  It’s one of those shows that must be any in any TV watcher’s collection.  You certainly don’t have to be a biker by any stretch, but if you like cerebral shows with fantastic characters and deep thoughtful dialogue, Sons of Anarchy is the show for you.  No knock on modern day sitcoms like How I Met Your Mother or the now completed Office, but the past decade (and maybe current decade) will be remembered for the serious, character driven shows that maybe Jack Bauer and Vic Mackey started in the 2001-2002, and “SAMCRO” is continuing today.