Throughout the 2016 season, JT Rozzero & Cowboy Morrissette will be engaging in a Facebook chat about what is happening in the world of Major League Baseball. They will then share it here for you fine readers to enjoy. Agree or disagree with their takes? Let us know on Facebook or Twitter!

JT Rozzero: Hey there Cowboy! April is hours away and before we know it will be Opening Day! In a new feature here at PTBN, you and I, best buds for life, will debate, discuss, argue and bitch about baseball.

Spring training is thankfully done… And MOST teams came away relatively healthy this year, which is always the main goal. Of course there were exceptions and there were also some surprises when it came to winning jobs (a certain overweight bear comes to mind). We’ve got a lot to hash out here, so let’s start at the top. Give me your World Series prediction as we sit on the doorstep of game one of the 2016 season.

Cowboy Morrissette: Wow! Making me dive right into the deep end of the pool! The consensus pick that’s out there is the Cubbies. I’m not going to go that way. That division is brutal and their reliance on young bats gives me just enough pause to go against the chalk. I’m going to go a bit against the grain and choose a team that was pretty disappointing last year: the Washington Nationals. I feel Bryce Harper will be able to repeat last season’s success and anchor a good lineup. Having a fully-healthy Anthony Rendon and adding speedster Ben Revere will also be a nice jolt to their offense. While I’m not a huge fan of the move, adding Daniel Murphy fills a need. Chances are guys like Jayson Werth and Ryan Zimmerman will miss some time, which is always a concern. The reason I’m picking the Nats is their pitching. At this point I think you know what you’re getting with ace Max Scherzer, a Cy Young caliber guy. Stephen Strasburg is the main basis for my pick. He was absolutely lights-out over the last two months of the season and I feel he will continue that into this year. I also feel the NL East will be weaker than expected based on a big step back from the Mets.

JT Rozzero: What is your reasoning on the Mets? I do agree, they got a lot of quality innings from young arms and that type of stuff tends to fluctuate. When you factor in that they don’t have the deepest lineup, even a slight decrease in the effectiveness of their rotation will lead them to coming back to the pack. 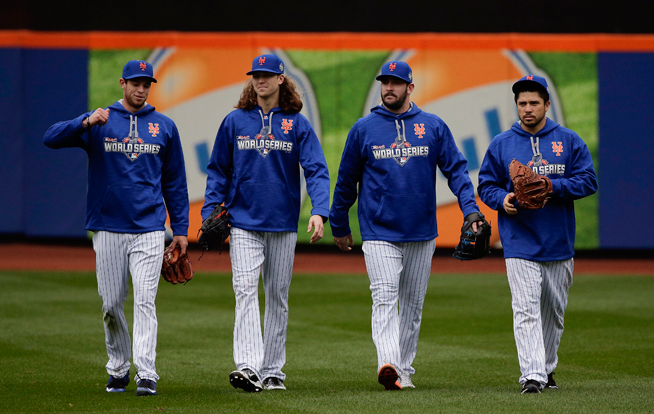 Cowboy Morrissette: You’ve got to love their pitching but those three studs (Matt Harvey, Jacob deGrom, Noah Syndergaard) need to be lights-out, and healthy, for them to have a chance. This lineup is weak with a capital W. To count on Yoenis Cespedes to perform like he did last year for them is a stretch but that is what they absolutely need. Prior to last year, he was pretty much a .265 hitter with about 25 HR. I think last year was an outlier season for him and you’ll have some regression. The rest of the lineup is well below average. David Wright, Curtis Granderson, and Melky Cabrera are all very much on the back nine. Lucas Duda is as streaky as they come. I do like Neil Walker and consider him an upgrade over Murphy at 2nd. In my opinion, for these guys to contend again they need everything to break perfectly and, while that is possible, it is generally not how the world works. I still think they’ll finish second in the division, but miss the playoffs. If one of their big arms goes down to injury, they are under .500 and back to the same old Mets we all know and love.

JT Rozzero: Do you see that as a pure two team race? Philly is in full rebuild mode and we know we can count out the Braves.

Miami have a shot?

By the way, hot news that the hand specialist gave Andrew Miller the ok to pitch through his chip fracture. Big news for a team without Aroldis Chapman until May and also having just lost Bryan Mitchell for half the year.

Cowboy Morrissette: It’s tough to give Miami much of a shot. Jose Fernandez is every bit as good as the Mets’ trio, but there’s only one of him. It would take a full, MVP-type season from Giancarlo Stanton to keep them in the race and even that may not be enough. Dee Gordon is also an All-Star caliber player. I actually like the Marlins’ lineup quite a bit more than the Mets’, but their staff behind Fernandez is ok at best. Honestly, I don’t see this division as a two-horse race. I see the Nats walking away with it and winning by double digit games.

Good news for the Yankees. They were almost down to only one elite closer!

JT Rozzero: Ok, well how about a true three-team race in the Central? Like you said, the Cubs are the hot pick and rightfully so, but the Cardinals never fucking die and the Pirates are still really damn good. The Cubs seem to have the most talent along with the biggest albatross.

Cowboy Morrissette: I like the Cardinals in this division. I expect Wainwright to return to form and Garcia, Martinez, and Wacha are all very solid. The Cubs have that over-hyped feel to me. Don’t get me wrong, they are loaded on paper, I just feel that they may be a year away.

JT Rozzero: I agree on the Cubs, it can be hard to carry the weight of all those expectations for a group of young players.

Also, weigh in with over under on Panda’s broken belts?

JT Rozzero: Any way-too-early thoughts from the first six days of the season? Anything glaring? Obviously the biggest injury so far is Kyle Schwarber, who tore his ACL and LCL and is down for the year. Things can change in a blink and while the Cubs have depth, it shows you how quickly plans can go south.

Cowboy Morrissette: Absolutely – they are deep enough to withstand that loss but it certainly doesn’t help. As far as early thoughts, the Cubs look ferocious. The Tigers lineup looks great. The Braves and Padres may have two of the worst five lineups of the last quarter century. And Trevor Story for President.

JT Rozzero: How about the Pirates too? Many thought they would end up the odd team out in the Central but they got off to a hot start here and maybe don’t regress like was assumed?

Cowboy Morrissette: I like the Pirates and could definitely see them building on last year’s success. I just consider them the odd team out for playoff purposes, but it is really flipping a coin. The back of their rotation is pretty sketchy with the Locke, Nicasio, Vogelsong pupu platter at the 4-5. 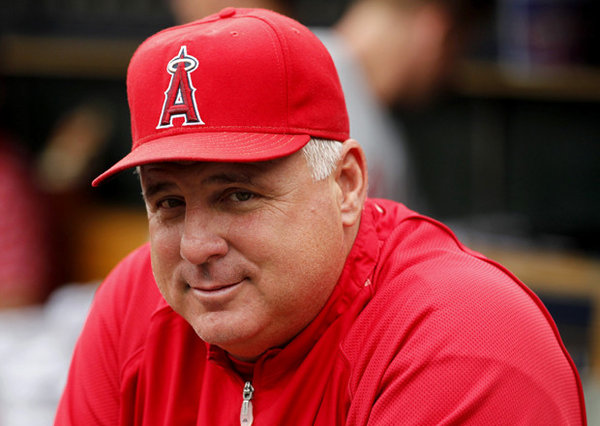 JT Rozzero: Let’s talk about the Angels for a moment. Everyone seemed to assume they would be in the mix because they always are but if you look at their lineup, it is Mike Trout, the proud remains of Albert Pujols, and not much else. They started 1-4 but they do have a pretty manageable rest-of-April ahead. If they can’t get themselves into a good place when we hit May, do we finally reach the end of the Mike Scioscia era? He is in year 17 (!) but how much goodwill does he have banked?

Cowboy Morrissette: I don’t think Scioscia’s job is in jeopardy. However, I also don’t think they have the personnel to contend. They have the look of kind of a one-man team. I don’t like their pitching staff at all.

JT Rozzero: The AL West certainly seems like it could be there for a few teams. I mean Houston is certainly legit but their rotation behind Keuchal isn’t exactly star studded. You clearly like the Mariners and actually picked Houston to miss the playoffs. Do you see Texas or Oakland in the mix at all? Or is the division all Seattle and Houston?

Cowboy Morrissette: I think Houston takes a significant step back this year. I don’t like their staff at all after Keuchel (and feel he won’t be as good as last year either). Their lineup strikes out way too much. I picked Seattle by default. Texas overachieved last year and will also come down to Earth. At the end of the day, I feel this a division full of mediocrity.

JT Rozzero: Seattle is the new Toronto for me. Until they prove it, I can’t buy it. I got a good twenty years out of that belief with Toronto when they were hyped as the sexy team every year and failed before they finally cashed in and got it done.

What are your thoughts on the Orioles? I’ve written a piece on them here before but I really feel like they whiffed on their window over the past few years by not making a couple of deals to push over the top. The 2013 season was, to me, the biggest example of this, because as we saw that race was wide open. Instead of making a play for Cliff Lee or another high caliber starter (which they desperately needed) their biggest move was Bud Norris.

Now I think they may closer to Tampa at the bottom of the pile than they are to the other three teams.

Cowboy Morrissette: They are certainly off to a nice start. That lineup is too good to count out. Crush (Davis), Adam Jones, and Manny Machado are as good as it gets. Machado, in particular, is a legit MVP candidate. With that said, their pitching is very suspect. Ubaldo Jimenez is very trick-or-treat. Yovani Gallardo is solid, if unspectacular. Chris Tillman is really the key for them. If he is a solid #3 type, they’ve got a shot. With that lineup, if they get average pitching, they can contend.

As an aside, just watched the Royals win in extra innings on a throwing error getting Terrance Gore from first to third and a wild pitch on a 2-2 count with 2 outs to win it. They can’t keep doing this, right?

JT Rozzero: The magic has to run out at some point I would assume. That said, the AL is still their yard for now and as much as I like a few other teams there are certainly none that I think are better here on April 10.