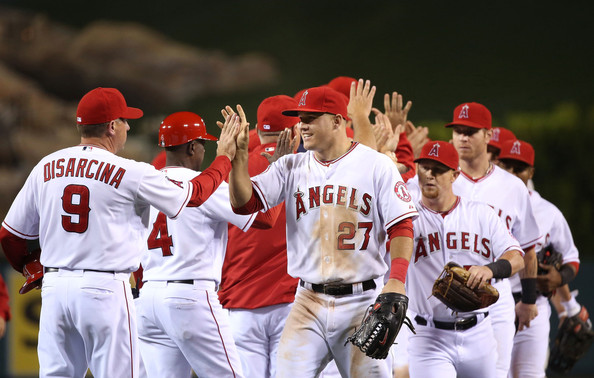 Welcome to the Place to Be Nation’s MLB Power Rankings!

My apologies for going over a month between these, but real-life got a little hectic for a while there. I’ve added a little bit of trade deadline commentary as well for each team to, in my own way, make amends. Of course, that’s a bit behind too, but what do you guys expect? A new car?!?!

As always, for the sake of comparison, here are the inaugural PTBPR; here’s the second edition; and the third.

All statistics are thru games played as of August 17, 2014. (Although the Sunday night games between ATL/OAK and COL/CIN are not included.)

1. N.L. Central [1] — Still the most competitive division in baseball as Milwaukee’s got some staying power, while St. Louis (3 GB) and Pittsburgh (5.5 GB) are hanging tough despite losing top names in Yadier Molina and Andrew McCutchen.

2. A.L. West [2] — A division that has Oakland and Los Angeles fighting it out on the top of the division, while Seattle is riding an 8-2 stretch, putting them six back in the division while also giving the M’s one of the two wildcard slots in the A.L.

5. A.L. Central [4] — Kansas City’s surging, Detroit’s floundering, and this division is only marginally better than the N.L. West.

1.  Los Angeles Angels of Anaheim (72-50) [4] — A 16-12 record since the All-Star Break, combined with Oakland’s 13-14 mark during the same stretch has pushed the Halos up three spots as they are just a half-game behind Oakland in the A.L. West as of this writing. A few solid bullpen upgrades: new closer Huston Street, lefty Joe Thatcher, and righty Jason Grilli should help the Angels shorten up what they need to get from their rotation. It’s working thus far.

4. Milwaukee Brewers (70-55) [15] — A strong 18-12 run since the ASB keeps the Brew Crew on top of the N.L. Central division, as Bob Uecker’s boys continue to impress. They added outfield depth in Gerardo Parra, but that’s it for a team that looks good heading into the stretch run.

5. Baltimore Orioles (70-52) [5] — The Birds maintain their spot in the rankings, just as they’ve held onto their perch atop the A.L. East. It remains to be seen if the most recent injury to Manny Machado will have long-term ramifications in the Charm City. The O’s added a solid bullpen piece in lefty Andrew Miller. Not a sexy move, but it does add to an already strong pen (4th in A.L. with a 3.19 ERA).

6. Los Angeles Dodgers (70-55) [3] — Despite getting swept at home by the Brewers, the Dodgers still led the N.L. West with a 3-1/2 game lead over the reeling Giants. The additions of second basemen Darwin Barney and pitcher Kevin Correia are the type of *meh* depth moves that good teams make. Nothing flashy, but it should help.

7. Kansas City Royals (68-55) [16] — Yep. I know. I said the Royals were a ‘fluke’ a while back. Guess not. KC has been hot since the break, going 19-9 in that time. They did nothing of note at the deadline, a head-scratcher that can only mean one thing: Dayton Moore is a sorcerer who hexed Detroit!

9. Seattle Mariners (67-56) [8] — A team that just took two out of three from Detroit, moving past the Tigers and into the second A.L. Wild Card spot, behind the two teams atop the West. A bad offense grabbed three bats to help out in outfielders Austin Jackson and Chris Denorfia, and DH/statue Kendrys Morales.

10. Detroit Tigers (66-56) [2] — A slumping, scuffling effort from the Tigers since the break, as they’ve gone 13-18 during that time, dropping behind the Royals in the Central and Seattle in the Wild-Card chase. There’s a lot of baseball left to be played, but this team has to wondering what to do with it all right now. Getting David Price is a nice alternative if Max Scherzer bolts at the end of the year, and it should help limit bullpen exposure on days when Price pitches. Joakim Soria was also nabbed in a good deal, but he’s hurt and the bullpen’s still bad. Joe Nathan, Jim Johnson, Phil Coke, etc. All *fart noise*.

11. Pittsburgh Pirates (64-60) [9] — They’ve lost five in a row and find themselves 5 ½ games behind the Brewers, but the Buccos are only 1 ½-games outside of a wild-card spot. If reigning MVP Andrew McCutchen can make it back in September, this is a dangerous team. They moved Grilli for the since-released Ernesto Frieri in a challenge-swap of relievers. Oops.

12. Miami Marlins (62-62) [20] — Moving up eight spots is a little bit deceptive here, as the Marlins are just a .500 ballclub at the moment. However, they’ve won seven of their last 10 games and are just three games behind the Giants for the second wild-card spot.

13. New York Yankees (63-59) [12] — The Bronx Bombers are hanging in there, despite a patchwork pitching staff and an offense that is nigh unrecognizable on some nights. At seven games back, they have no real shot of catching Baltimore in the East, but NYY is only 3 ½ games out of a wild card. A flurry of July deals brought in pitchers Brandon McCarthy and Chris Capuano, along with infielders Stephen Drew, Martin Prado, and Chase Headley. Smart moves that address the Bombers’ three biggest weakness in their rotation, infield, and bench.

14. Tampa Bay Rays (61-63) [17] — The Rays have made some minor history, charging back from a horrid opening three-plus months (44-53 at the break) to sit just two games under .500 and 6 ½ out of the postseason. Moving David Price was the right thing to do, but it’s not likely the Rays got enough in return. *Flash forward to 2018 World Series, Game 7, final batter, where Drew Smyly induces a groundball double-play turned by Nick Franklin and Willy Adames. D’oh!*

15. San Francisco Giants (65-58) [14] — The Dan Uggly Uggla experiment is over, but the Giants have dropped seven out of ten. The G-Men still control the second wild-card spot, but barely. Jake Peavy has gone 1-3 for San-Fran, despite posting a 3.86 ERA. He’s a sound insurance policy since Matt Cain’s elbow died.

16. Cincinnati Reds (61-62)[7] — They are hovering around .500 and just four out of a wild-card slot, but the injuries have just piled up to the point where you have to wonder if it’ll prove to be too much for the Reds.

17. Toronto Blue Jays (64-61) [13] — One of many teams caught in that “not-yet-over-70-wins” realm, the Jays are four games in back of a playoff spot, but they’ve dropped seven of their last ten. Toronto drew some criticism for not doing anything more than adding 3B Danny Valencia at the deadline. He should form a decent platoon with Juan Francisco the rest of the way, but are the Jays really good enough to hang around in October anyway? Probably not.

18. Atlanta Braves (63-60)[11] — The Braves are just 1.5 games out of a wild-card spot, but a terrible offense (24th in OPS at .680) will probably keep Atlanta from making significant gains. They’ll need to rely on other teams stalling. At the deadline, Atlanta added utility man Emilio Bonifacio and lefty reliever James Russell, but they probably needed a lot more.

19. Cleveland Indians (62-61)  [19] — The Tribe sits five games out of a wild-card, which is not impossible, but it doesn’t seem like there is enough gas in the tank for a sustained run right now. They moved pitcher Justin Masterson and infielder Asdrubal Cabrera for a few bits, but nothing game-changing came back in return.

20. New York Mets (59-66) [21] — The biggest drama for the Mets is the ongoing Matt Harvey-rehab stuff. Still, they’ve got some good pitching talent coming around, including Harvey, so maybe a 2015 run is possible if they can find some offense to go along for the ride.

21. San Diego Padres (58-65) [24] — The Friars are essentially tied with the Mets in the record books, not all that shocking given that the Mets and Padres are the worst two offensive clubs in baseball. Thought they would move a couple more pieces, but shipping off Street, Denorfia, and Headley for a few prospects isn’t too bad.

22. Chicago White Sox (59-65) [22] — Since Masa Tanaka is probably out for the year, Jose Abreu should win the Rookie of the Year award in a walk. One thing to smile about on the South Side, I suppose.

23. Boston Red Sox (56-67) [18] — A bad team right now, but the trades to bring on Cespedes, Craig, and Joe Kelly suggest that the Sox will reload with 2015 in view. The BoSox definitely made moves to signal that next year is not a rebuild, nabbing veterans on the cheap.

24. Houston Astros (52-73) [25] — The injury to stud outfielder George Springer is a blow to his development, but it really doesn’t hurt the fourth-place ‘Stros too much at this time.

25. Minnesota Twins (55-67) [28] — Minnesota got involved in the hot trade action by moving Sam Fuld and Kevin Correia. Word is they acquired Tommy Milone and a bag of peanuts.

26. Philadelphia Phillies (54-70) [23] — “Let them eat cake!” exclaimed Phillies’ GM Ruben Amaro, Jr. as his fanbase clamors for ANYTHING to move this albatross of a franchise forward.

27. Chicago Cubs (53-70) [29] — Meanwhile, the Cubbies are still terrible, but the prospect pipeline bodes well for the future. While they won’t meet the Back to the Future III prediction of beating Miami (because those fat cats in New York didn’t put the Marlins in the right league!), the idea of the Cubs becoming contenders by 2016 isn’t crazy.

28. Arizona Diamondbacks (53-71) [27] — Kirk Gibson continues to make his seat hotter and hotter and the loss of Paul Goldschmidt certainly won’t help the D’Backs as they play for…whatever the hell a team that is 18 games under .500 plays for. They traded some smaller parts, like Joe Thatcher and McCarthy, and a couple of medium-sized parts, like Prado and Parra, but this is still a team in need of more changes.

29. Colorado Rockies (47-75)[26] — The season-ending injuries to Troy Tulowitzki and Carlos Gonzalez are the death-blow to the Rockies. At this point, those two need to be moved as soon as they are healthy; those contracts are sunk costs, but the team won’t move forward with false hope.

30. Texas Rangers (48-76) [30] — The injuries keep coming, as ace Yu Darvish in on the 15-day DL with a bum elbow. What’s next? Appendectomies for the mascots? They moved Soria for a couple of solid-looking arms, but probably should’ve blown things up even more. Looks like the Rangers are betting on healthy rebounding in 2015 from Prince Fielder, Shin-Soo Choo, and that pitching staff.

So, that’s the rankings for this go-around. Look for another round in early-September, and thanks for reading!