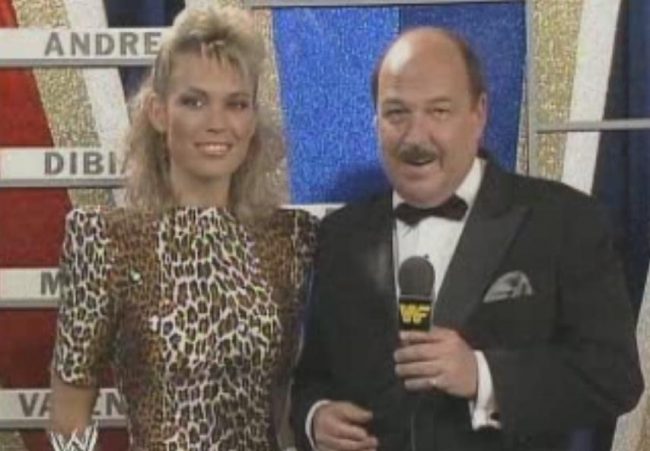 The most famous letter-turner ever was brought in to serve as a guest timekeeper for the final match of the WWF Title tournament at WrestleMania IV and also joining “Mean” Gene Okerlund backstage to go over the tournament round-by-round. Along the way, Wheel of Fortune’s Vanna White found ways to avoid guest ring announcer Bob Uecker and get linked color commentator Jesse “The Body” Ventura in the supermarket tabloids. Very few women have done more with less. 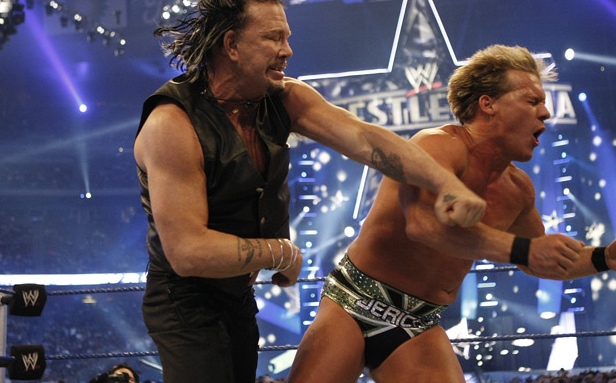 Mickey Rourke was fresh off the heels of “The Wrestler,” where he played a washed-up wrestler looking for a last gasp of glory. Tying into that, the actor was rumored to be in a match with Chris Jericho, who was going after washed-up wrestlers looking for a last gasp of glory. Instead, Rourke was ringside when Jericho took on and beat three legends at WrestleMania 25. After the match, Rourke came in the ring and knocked Jericho out.

The host of Live! With Regis and Kathie Lee was a big fan of professional wrestling, frequently having WWF superstars on his show, so he fit right in when he was brought as a guest color commentator for the WrestleMania VII main event between WWF Champion Sgt. Slaughter and challenger Hulk Hogan. But his involvement at the event is mostly remembered for his backstage interviews, including the one with Tenryu and Kitao, who were wrestling Demolition, and trying to break the language barrier by naming off Japanese corporations. 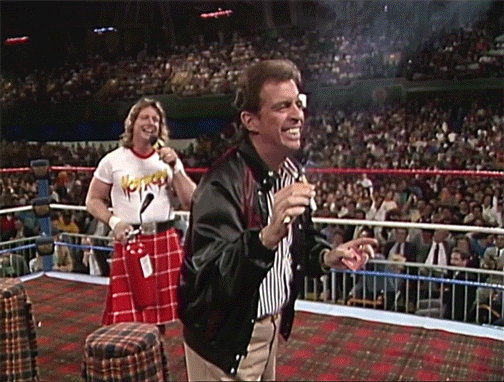 Morton Downey Jr. was a controversial late night TV talk show host in the late-1980s who basically pioneered the “trash TV” format that runs rampant to this day. At WrestleMania V, though, he was a guest on Piper’s Pit, antagonizing the host by repeatedly blowing smoke in “Rowdy” Roddy Piper’s face. Piper responded by setting off a fire extinguisher on Downey and running him out of the ring. 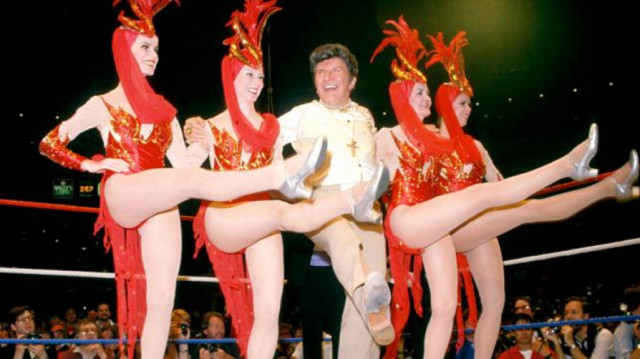 The first WrestleMania set the standard for bringing in big name celebrities, and pianist and entertainer Liberace added to the big name feel for the event. One of the most well-known entertainers of the 1950s and 1960s, Liberace came in dancing with the world famous Radio City Music Hall Rockettes and used one of his trademark little bells while acting as guest timekeeper. 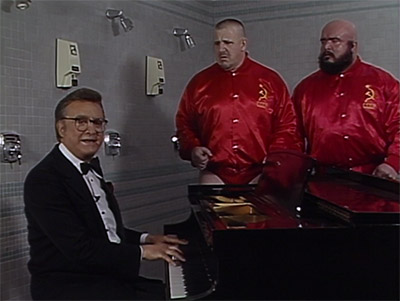 In one of the most famous bathroom scenes in the history of WWF pay-per-views, comedian Steve Allen played the piano to help tune up Nikolai Volkoff and Boris Zhukov for their singing of the Russian National Anthem before the team’s match with the Hart Foundation. Allen, the original host of The Tonight Show, had other ideas, though, frustrating The Bolsheviks with parody in an attempt at perestroika. 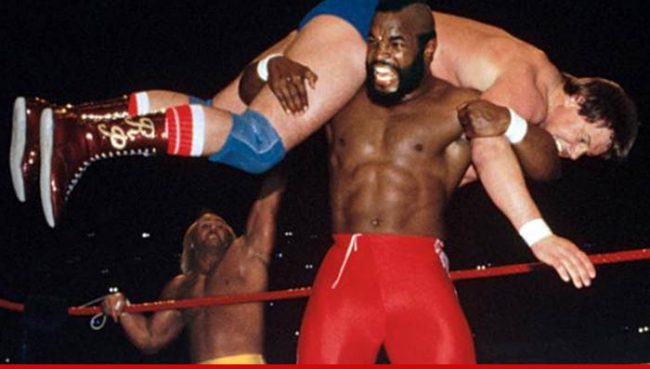 Hulk Hogan was quickly becoming one of the biggest stars in the world in the mid-1980s, so he needed a huge star to be his tag team partner in the main event of the first WrestleMania. He turned to his Rocky III co-star and the star of The A-Team, Mr. T. The mohawked megastar helped Hogan beat Roddy Piper and Paul Orndorff in the main event and went on to take on Piper in a boxing match at WrestleMania 2. Also, the WWE Hall of Famer is very fond of his mother. 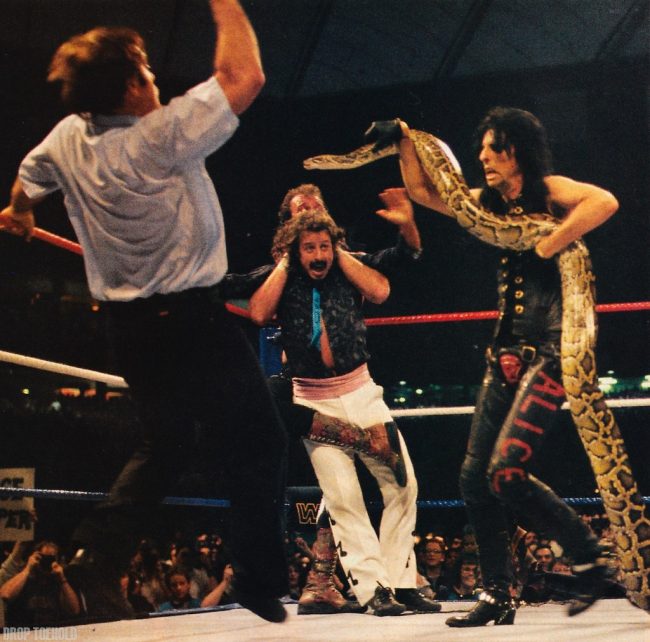 Looking to counter the interference from The Honky Tonk Man’s manager Jimmy Hart, Jake “The Snake” Roberts enlisted the aid of shock rocker and Detroit native Alice Cooper to be in his corner for the WrestleMania III match. Cooper may not have helped Roberts beat Honky, but he did torture Hart with Roberts’ snake, Damien, after the match. 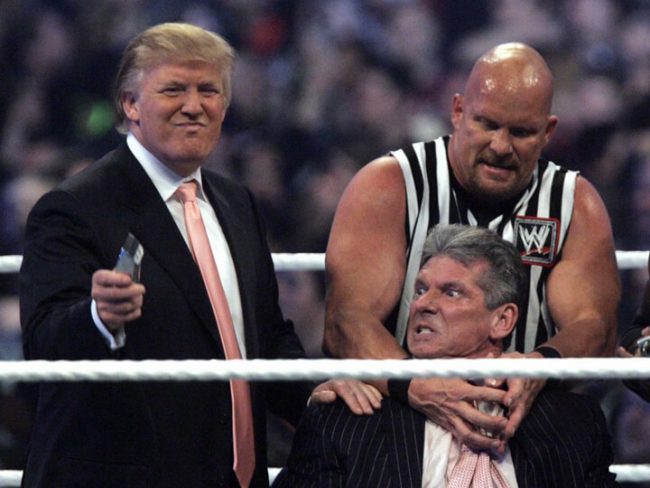 Among his many accomplishments in the 21st Century, Donald Trump’s major claim to fame should have been leading WrestleMania 23 to one of the company’s highest buyrates when he and Vince McMahon engaged in the “Battle of the Billionaires,” nailing McMahon with a clothesline outside the ring in the process. Trump’s choice of Bobby Lashley to counter Umaga paid off, and Trump and special referee Steve Austin shaved McMahon’s head. Sure, Trump ate a Stone Cold Stunner, but he went on to be a WWE Hall of Famer. What more could Trump ask for, right? 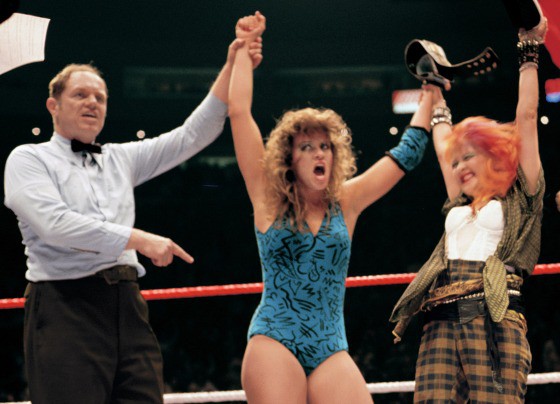 While Hulk Hogan was becoming a global icon in 1984, the WWF was getting a lot of mainstream press due to its relationship with rocker Cyndi Lauper, who cast manager Capt. Lou Albano in her video for “Girls Just Wanna Have Fun.” Lauper led the way for the WWF’s Rock ‘n’ Wrestling Connection and gave the rub to Women’s Champion Wendy Richter by acting as her manager against Lelaini Kai at the first WrestleMania. With Lauper’s involvement, the WWF reached heights that very few people thought imaginable.