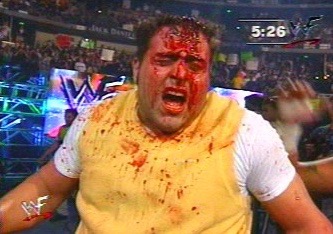 The Hardcore division was at its peak in early 2000, with Crash Holly in the middle of it all and having a blast with his 24/7 title defense rule. That led to a huge modified battle royal at WrestleMania that featured all of the division stalwarts brawling around the arena for a chance to leave with the broken gold. And during that melee, Pete Gas of the Mean Street Posse was split wide open with one of the nastiest blade jobs in Mania history. Gas bleeding out was only enhanced by the plasma staining his beautiful sweater vest.

In a match that featured a pretty obvious outcome, Hulk Hogan and Sgt. Slaughter were tasked with really pushing themselves to deliver a WrestleMania caliber main event that went beyond Hogan’s standard 1991 style bout. And they certainly succeeded as they kept up a really hot pace that mixed in brawling, submission spots and a good dose of drama. Adding to the match was Hulk Hogan getting sliced open for one of his most memorable blade jobs, aided by the blood teeming down the Iraqi flag that he tore apart during the match.

In one of the most intriguing WrestleMania main events of all time, the mercurial Roman Reigns was looking to cash in on his Royal Rumble win to defeat the unebatble Brock Lesnar for the WWE Title. Fans weren’t thrilled that Reigns had been force fed into the bout but he certainly proved he belonged in what turned into a brutal, hard hitting brawl between the two hosses. And while Brock had seemed unbeatable for nearly a year at this point, Reigns had him rocking, partly because of Brock getting ripped open in a nasty blade job. Seeing the blood stain Brock’s blonde hair and stream down his massive chest added a whole new layer to one of the greatest matches in the show’s history. 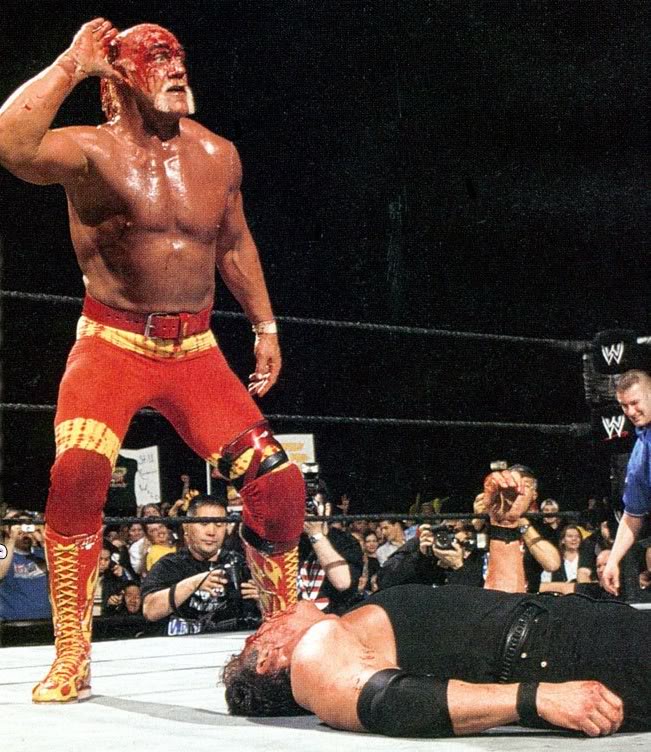 With Hulk Hogan physically on fumes and Vince McMahon never the most athletic wrestler, everyone knew that this match would be an overbooked brawl filled with weapons and gore. And that is what we got. The blood flowed very freely with Hogan really tapping a vintage gusher that just added to both the insanity and intensity of the brawl.

After a career filled with disappointing WrestleMania performances, Mick Foley was hell bent on delivering a classic against his old friend and current foe Edge. It was also a chance for Edge to continue to build his credibility as a versatile performer willing to do anything in the name of delivering in the ring. Here, he was sliced apart by barbed wire and bled liberally, which only added to the horror when he speared Foley into a flaming table, leaving Edge trembling on the ground, a bloody, burnt victor.

Starting in mid 2003, Shawn Michaels decided that every big time match he was in would feature a five alarm blade job on his end. Well, it felt like he made that decision anyway. In his first WrestleMania main event in six years, Michaels went all out and tapped a vein that would have made even Abdullah the Butcher blush. While he ultimately came up short in his WWF Title bid in the classic triple threat match, Michaels certainly made sure his performance would never be forgotten.

During a time when blading was actually banned in the WWF, WrestleMania VIII ended up featuring two very memorable cuts that added to the drama of their respective matches. Our first to check in on the list is Ric Flair, who was on a maniacal mission to not only thwart Randy Savage’s title chase but also to destroy Macho Man’s marriage. A man possessed, Savage mowed through Flair, ripping his head open and then rolling him up to win the bout and strap. It was in the post match, though, where Flair’s blood was most memorable, as he planted a huge, forced, blood soaked kiss on Elizabeth before getting smacked around and sent scurrying to the back.

The other blood that poured in the Hoosier Dome in 1992 came courtesy Bret Hart, who was looking to regain his beloved Intercontinental Title from his buddy Roddy Piper. The match got very chippy and eventually Bret got popped hard enough to be busted open, adding to the drama of these close friends doing whatever it took to win the gold. In the end, Hart outlasted Hot Rod and established himself as a star thanks to a huge, rare, clean win over Piper.

We discussed this match earlier, but Hulk Hogan wasn’t the only man to bleed in that bout as Vince McMahon tapped an all time gusher as well. And that blade job was the centerpiece of the match thanks to a beautiful camera shot of a blood soaked McMahon peering over the edge of the ring apron with pure hate and evil beaming from his eyes. It was an all timer across the board.

Does anything really need to be said? Star making performance and one of the most iconic pictures in wrestling history.