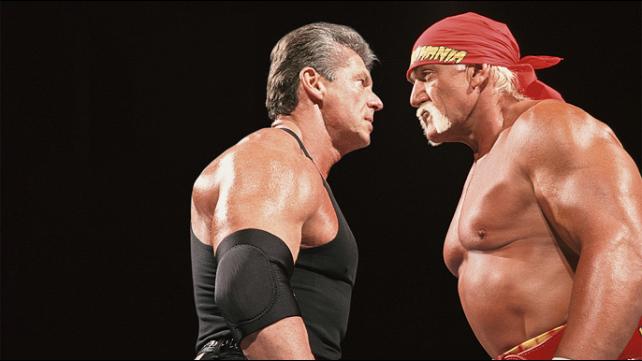 Expectations were tempered for the battle dubbed to be 20 Years in the Making, but Hulk Hogan and Mr. McMahon went out and delivered a tense and hate fueled weapons filled brawl that left both men bloodied and beaten by the end of it. It also featured an iconic camera shot and a memorable return from Roddy Piper mixed into all of the brawling in and out of the ring. 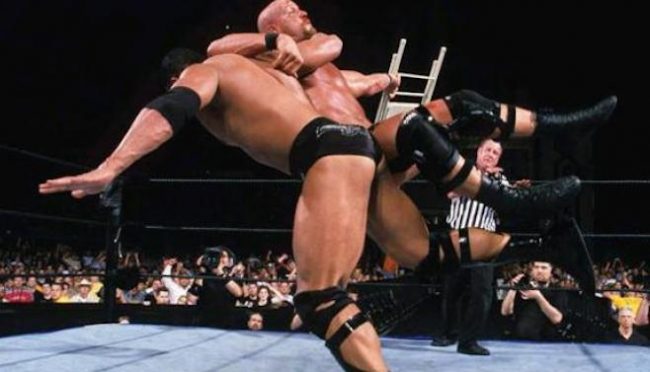 Often considered one of the greatest matches in WrestleMania history, Steve Austin and The Rock were on a collision course for the WWF Title since Austin returned from injury in the fall. With the stakes high and the atmosphere at a fever pitch, these two legends put on a near flawless execution of the Attitude Era Main Event template capped off by one of the most memorable and controversial heel turns in company history. 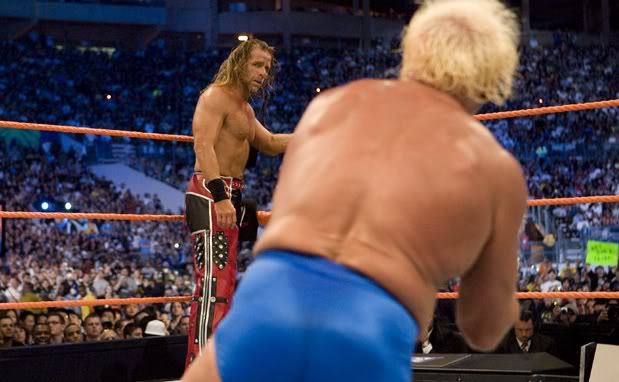 As 2008 dawned, Ric Flair was adamant that he had many years of action left in the tank, but Mr. McMahon felt differently and put a bounty over Nature Boy’s head: the next match he lost would be hist last. Flair lasted all the way to WrestleMania before one of his best friends in the business put the nail in his coffin with the infamous “I’m Sorry, I Love You” superkick. Flair dialed it up one last time and he and Michaels went all out to send him off in style. 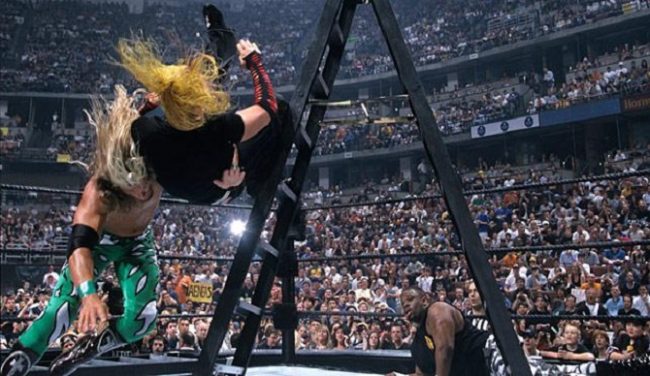 Edge & Christian and the Hardy Boyz informed the wrestling world that they had officially arrived back in October but both teams were still looking for that feud and match that could elevate them to the next level. Enter the Dudley Boyz and their tables and their heat and it was officially on. Heading into WrestleMania, Edge & Christian were seen as the third best of the teams but by the end of April, they had won the biggest match of their career in Anaheim and exposed their sardonic, biting heel personas that would take them to the next level. 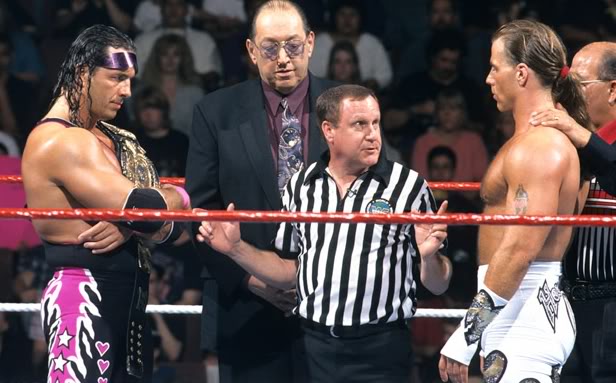 By early 1996, it was very clear that Shawn Michaels was on his way to the top of the WWF. The current ace, Bret Hart, wasn’t quite ready to relinquish his title to Michaels but the two were put on a collision course for an Iron Man war in Anaheim. The bout went the full broadway before Michaels won it in overtime and while the match itself has caused tons of debate over its quality, you can’t debate the yeoman work these two greats put in on that night.

The Money in the Bank Ladder Match concept was created just in time for WrestleMania 21 and the six men involved in the inaugural tilt set an incredibly high bar on the template. All six took to the air and battered each other with ladders and chairs in a quest to procure the briefcase hanging above the ring. It was the match that set Edge on a path of stardom and reminded us just how incredible of an athlete Shelton Benjamin was. 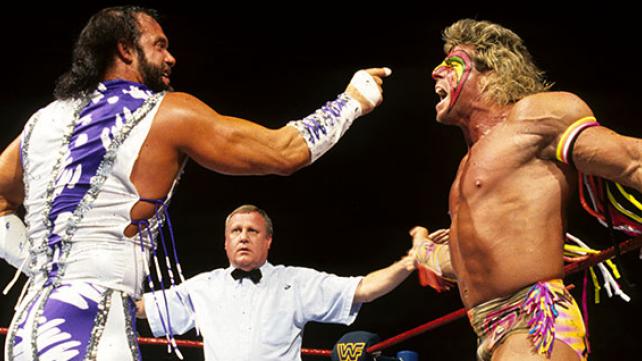 One match that might fly under the radar when thinking about stipulation matches involving weapons but the stipulation certainly had a deep effect on the emotion that was conveyed throughout this contest. Having the gravity of one of these mega stars career being on the line makes Ultimate Warrior’s god talking make a little more sense and gives the Macho Man redemption story much more juice as now he has finally rectified the shitty situation with Elizabeth but his career is over. 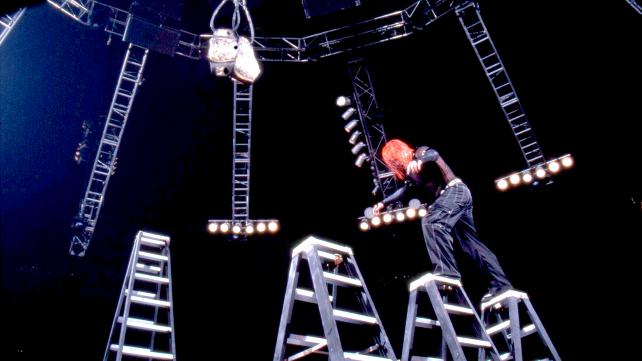 Building off the momentum of the prior year WrestleMania match and TLC at SummerSlam, expectations were sky high for this rematch. The six men involved were up to the challenge crafting another insanely memorable car crash spotfest match that works as a cornerstone of the most revered WrestleMania of all time. Spots like the Edge spear and the inclusion of Lita and Rhyno helped bring a uniqueness to this match and leave the viewer in astonishment at the athleticism and brutality being displayed. 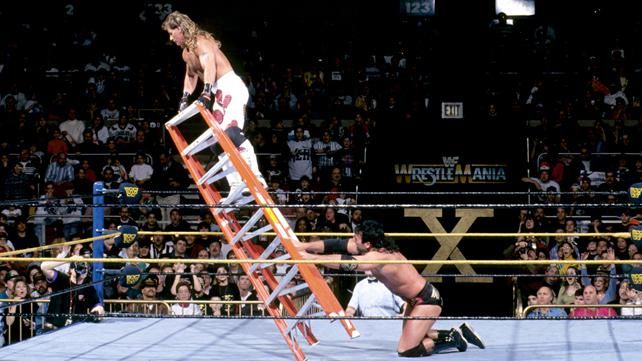 Ladder matches were such an obtuse concept to most mainstream wrestling fans in 1994. Besides the rumblings of stuff in Stampede, a few Colosseum Video exclusives and low level indies, they were really obscure. Razor Ramon and Shawn Michaels went out and set the template for what a gimmick match involving a ladder would become in the wrestling world lexicon. Even more amazing is the fact that this was the first ladder match for each of them so this wasn’t a case of them honing their craft on a particular gimmick match on the indy level and then unveiling it on the big stage. The spots may be a bit tame in 2017 eyes but the impact and gravity of this match can not be understated. 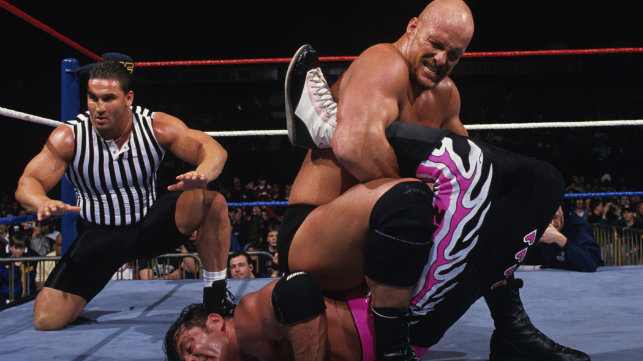 I don’t know of another wrestling match in history where you can pinpoint one moment where you see a seminal star being created like the visual of Steve Austin in the Sharpshooter. Everything from the blood streaming down his space to his refusal to give up make this match one of the most important matches in wrestling history. This match finished #1 in our overall WrestleMania matches poll so it was no surprise it claimed the top spot here. A masterpiece.