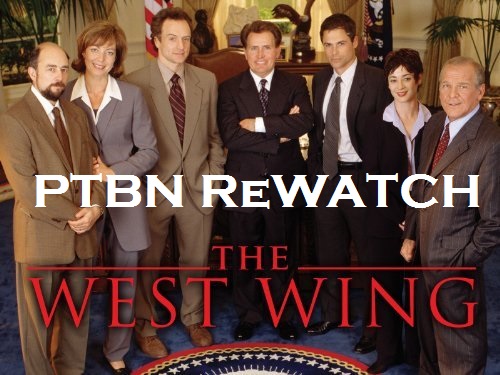 The West Wing’s imprint on the American landscape was greatly expanded between seasons one and two while some people caught up on reruns of the acclaimed show over the summer, most had their attention grabbed by the show’s Emmy win for Best Drama Series, as well as writing, directing, and supporting acting for Richard Schiff (Toby) and Allison Janney (CJ.) Expectations were high going into the second season for the show as a whole and for the resolution to the exhilarating cliffhanger where gunmen opened fire on the President and his staff. Creator and writer Aaron Sorkin delivered with what I and many consider to be, at its time, the best single season of television ever delivered. Let’s recap, shall we?

THE ADMINISTRATION AT THE START OF SEASON TWO

The administration’s new mantra “Let Bartlet be Bartlet” lead to increased approval ratings, ratings that are bolstered by public sympathy from an assassination attempt in Roslyn, VA. With midterms approaching, the staff must prepare strong election strategy and worthwhile public policy to keep their wave of support strong. Political strategist Mandy Hampton exits the administration between seasons for reasons that are never explained (maybe she was no longer needed with their approval ratings improved, maybe she didn’t like getting shot at, maybe she was a figment of everyone’s imagination and never really existed, who the heck knows?)

The answer to the season one finale’s lingering question (“who’s been hit…who’s been hit?”) turn out to be both President Bartlett and deputy chief-of-staff Josh Lyman. The President’s injuries are superficial and he makes a full and speedy recovery (not before being placed under anesthesia before which the First Lady informs his doctor about the President’s concealed MS, a fairly major plot point that we’ll get back to later.) Josh, on the other hand, has suffered life-threatening injuries and requires hours of surgery and months of recuperation. In the aftermath of the shooting, public sympathy wanes and Democrats only manage a split in the midterm congressional election. The staff suffers from some negative psychological aftermath. Charlie blames himself for the shooting, when the shooters are revealed to be white supremacists targeting him and Zoey for their inter-racial relationship, straining his relationship with Zoey and the President. Worst of all, understandably, is Josh who must overcome PTSD over the incident.

Then there’s that whole pesky MS thing. After the Speaker of the House bamboozles the White House staff to make himself look better after a Congressional session-opening breakfast meeting, Leo and Toby agree to begin channeling the staff’s energies towards re-election, without actively involving the President (they fear that the President will resist getting into campaigning so soon.) When the State of the Union address blatantly sets up the administration’s election agenda, the First Lady reacts with anger towards both the President and his staff. Why? Because, we learn, she only agreed to conceal the President’s MS on the condition that he only serve one term for health reasons. When Toby puts two and two together, he must be brought “in the loop” on the MS issue, beginning a domino effect that ends with the President addressing the nation to reveal his health situation and announce if he will or will not seek a second term. His decision is influenced by some clouded judgement as days earlier beloved Presidential secretary Mrs. Landingham is killed in a car accident. After laying Mrs. Landingham to rest, President Bartlet decides that he will not run for re-election, all that is left is to tell the nation…or will he? This is where our season ends.

Legitimately they are all good. The season premiere multi-part In The Shadow of Two Gunmen is spectacular television both for the depiction of the administration in epic crisis mode as well as flashbacks to the earliest days of the campaign that reveal how everyone came to the Bartlet camp. The now annually great Christmas episode, this season titled Noel, focuses on Josh’s PTSD and is outstanding, as is the both dramatic and funny 17 People, where Toby learns about the President’s MS. The season finale, Two Cathedrals, is generally regarded as the show’s greatest single episode.

There are tons of other great episodes. Personal favorites include the Thanksgiving-centered Shibboleth, the two-part Bartlet’s Third State of the Union/The War At Home, uplifting The Stackhouse Filibuster, and the entire season ending arc comprised of Bad Moon Rising, The Fall’s Gonna Kill You, and 18th and Potomac, all leading up to the aforementioned Two Cathedrals.

I will once again state that nothing in season two is bad. There is some stuff that I personally enjoy more than others so since I am forcing myself to choose “worst” episodes I will single those out in the latter category. The Midterms, The Drop In, and Ellie are all episodes that I sometimes yank from my personal rewatches. The stuff where Ainsley Hayes (Emily Proctor) is first introduced as a Republican TV commentator who is hired for the Bartlet administration’s Counsel’s office feels really forced, but Ainsley ends up being such a great character that her later appearances are highlights.

Season Two of The West Wing is the show’s best season. Yes, it is kind of depressing to be on season two of seven and know that it is all downhill from here. But there are plenty of excellent highlights ahead. And yeah, season two is great. If you were on the fence after season one and season two doesn’t hook you for good…you should probably give up.

If you do stick around, you get to find out if Bartlet is going to run (spoiler: the show ends with a bunch of seasons about people who don’t work in the White House…I’m kidding!) You also get to see how the Sorkin world reacts to the real world. This is the last season before 9/11 and the landscape of both the real world and, sadly, our world change forever starting with season three.