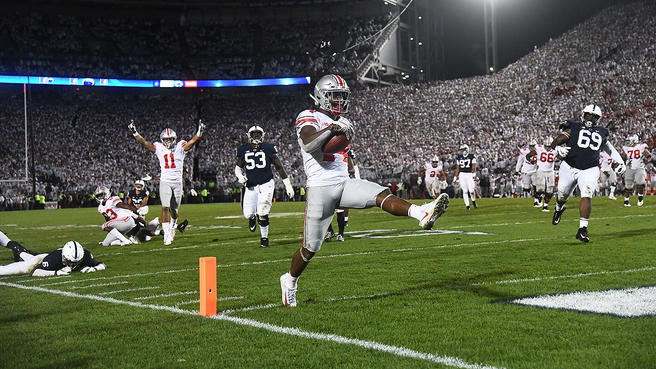 Hello football fans! A big weekend in football has passed and some big games with controversial finishes, and teams have slid. Teams also have risen up the ranks. The first CFP rankings come out soon, so now’s the time for teams to stake some claims. Let’s see what the guys have in store!

-Ian Book puts ND on the radar: After not having beaten Stanford since 2014, freshman sensation Ian Book not only helped Notre Dame break the streak but has put the Irish on the radar for the playoff. Book threw four touchdown passes and the Irish defense continues its fine season by shutting down Bryce Love, holding him to 73 yards (mostly garbage yards late) in a 38-17 victory. ND is now 5-0. The bad news is that they’ve already played four games at home. This week they head to Blackburg to face a grizzled Virginia Tech team. Loss #1 may happen here. Stay tuned.

-Huskies make a statement: Washington continues to try and push that loss to Auburn in the rear view mirror with a convincing win Saturday over upset-minded BYU. Jake Browning threw just two incompletions and 277 yards in a 35-7 rout of the Cougars. Washington’s defense held BYU to under 200 yards of offense and only seven first downs. The Huskies are now 4-1 and head to the Rose Bowl this week for a date with UCLA.

-Big win for the Buckeyes: Down 14 points with eight minutes to go in raucous Happy Valley, Dwayne Haskins throws two touchdown passes and OSU overcame Trace McSorley’s 461 yards of total offense with a 27-26 win in another crazy back and forth battle. This is a tough loss for James Franklin, since they had the Buckeyes at home but questionable play calls late in the game got Franklin some heat but he stood tall and took the barbs. That’s nice, but a loss is a loss.

-No Upset this time: Last year, Clemson’s run to the National Championship was ALMOST derailed with an ugly Friday night loss at the Carrier Dome to Syracuse. This year the Orange headed to Death Valley, and they almost did it again! Clemson had some drama during the week involving their quarterbacks, and on Saturday it seemed like distractions. Trevor Lawrence, who got the starting job was knocked out of the game, but Travis Etienne rallied the Tigers from a ten point deficit with two fourth quarter touchdowns and a 27-20 victory. From here, Clemson heads to Wake Forest for what should be an easy one before returning home for a tough one with North Carolina State.

-Academies Update: Army moved to 3-2 with an easy 42-13 win in Buffalo as the Black Knights rushed for 281 yards. Air Force falls to 1-3 with a 28-25 loss to Nevada. Navy had a bye, but it’s evident that Army is the best of the trio. That doesn’t mean they’ll win the Commander In Chief trophy, but Army-Navy may be for more than pride this year. Speaking of, we get our first CIC game as Navy travels to Colorado Springs to face the Falcons this week. Army has their bye this week.

-Red River Showdown: The Red River Rivalry, between Texas and Oklahoma is one of college football’s best rivalries. Due to Texas’ struggles over the past decade, the greatness has fallen off just a bit. This year though, it could very well decide the Big 12. Both teams we able to come away with victories this week, Texas beating Kansas State and Oklahoma putting up 66 in a win again Baylor. Gameday will be in Dallas for this game next week and it should be a hell of a game.

-One Week Later (MSU-UK): One of my takes last week, was about the Mississippi and Kentucky game. I really was interested to see how both teams came out of that game and what
they were able to do the rest of the year. One week in, things stayed about the same, in that Kentucky dominated and Mississippi State struggled mightily. Kentucky was able to take South
Carolina to the woodshed, while Mississippi State just couldn’t ever get anything going on offense. If the Bulldogs don’t turn it around quickly this could turn into the snowball effect I
talked about last week, while Kentucky looks like a real SEC East contender.

-LSU Dominates: LSU’s problem every year it seems to be that they can’t find a quarterback that matches the talent of their running backs and wide receivers. Well, this year I believe they found their guy in Joe Burrow. He has been quite impressive so far this season and have the Tigers playing like they may be able to contend with the dominant Alabama. This week the Tigers welcomed Ole Miss to Death Valley, and then proceeded to send them right back home to Oxford with a butt whooping. The final score was 45-16.

-Oregon Bounces Back: One week after a heartbreaking come from behind loss to Stanford it was interesting to see if the Duck would recover in their trip to Berkeley to play the Cal Bears. Berkeley is always a trap for any PAC 12 team, especially for one who just came off of such an emotional game. Oregon was able to use a 21 point 2nd quarter to mount a lead that call just couldn’t come back from. Oregon is a team we all need to watch the rest of the season as I believe they could possibly slip back into the playoff conversation.

-West Virginia’s Showing They Belong: West Virginia may be the best team that no many people are talking about. They came into the season being Oklahoma’s closest contender, but they have put up some impressive offensive numbers that can’t be ignored. While their defense let up 34 points in this game, a lot of then were scored late after they had the game in the bag, it was the first time they’ve given up more than 17 points. They will definitely have their eyes on the Red River Rivalry this weekend, as it will likely decide who they are fighting for conference supremacy with for the rest of the season.

Here’s a look at the big games this coming weekend: